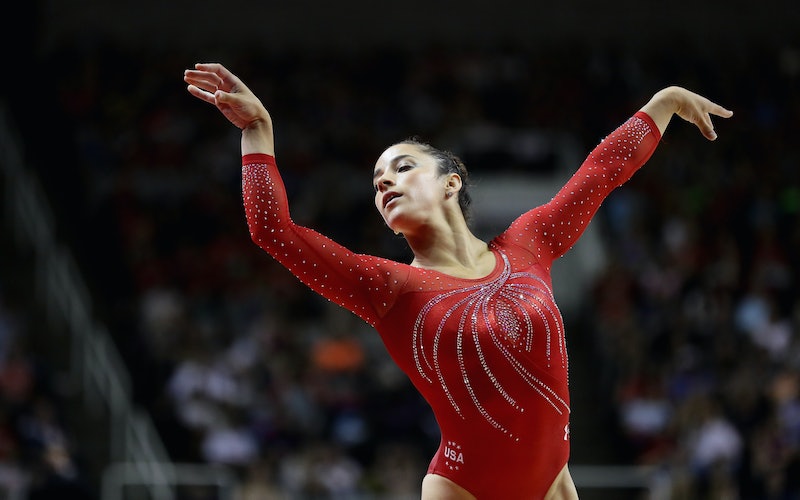 As defending floor exercise Olympic champion, official team captain, and unofficial team "grandma," Aly Raisman is definitely going to be an athlete to watch at the 2016 Rio Games. She's a fan favorite, so you'll want to know when Aly Raisman's events at the Olympics are, lest you miss her amazingness. The Rio Games broadcast schedule is seriously packed, but I've got you covered on how to catch the star athlete in action.

It's especially important to catch her routines this year, because Raisman's story is particularly fascinating this time around: After all, it's rare these days for female artistic gymnasts to compete in more than one Games, so she and fellow second-timer Gabby Douglas were seen almost as underdogs — even though they both cleaned up with multiple medals in the 2012 London games. Both have healthy attitudes towards their status as gymnastic anomalies, though — as Raisman explained in a rather zen manner to The Wall Street Journal: "To be honest, I always think about the fact that I am the reigning floor Olympic champion. Sometimes I struggle a little bit with being confident, so when I go up there I just remind myself that no matter what happens I’ve already won, so I just have to go out there and enjoy it."

Plus, in addition to being ridiculously talented and grounded, Raisman also happens to be ultra-relatable — she likes good old R&R and spending time with her dog as much as we all do. Any way you cut it, you can't miss her events — and, as fate would have it, you probably won't. You see, luckily for all us rabid gymnastics fans, Raisman will most likely compete in multiple events, spread out over the course of a couple of weeks, so you'll have lots of chances to see her in action.

These will determine how far into the medal ceremonies Raisman advances. Catch the U.S. qualification rounds on Aug. 7 starting at 4:00 p.m. ET.

Team Captain Raisman will most definitely be representing the US at the team final, which will air on Aug. 9 at 3:00 p.m. ET.

Each country is only allowed to enter two competitors for the all-around — three-time world champ Simone Biles is a lock on one of the spots, but the other one is still up for grabs. It's possible Raisman could score the second spot, though it's not terribly likely. According to the Team USA website, "She has been one of the country’s top all-arounders as of late, but says it is not a focus for her in Rio, knowing full well she could be one of the top in the world and not qualify for the final due to the two-per-country rule."

According to ESPN, not medaling at the London Games all-around (she placed fourth) was one of her big regrets, so it would be quite the heart-warming Cinderella story to see her make the podium this time around. In case Raisman happens to compete in the event (and even if she doesn't), you can watch the event on Aug. 11 at 3:00 p.m. ET.

She scored a bronze in beam in London, so she may return to defend her title at the individual balance beam event, which will air Aug. 15 at 1:00 p.m. ET. According, once again, to the Team USA website, She has put extra effort into beam this year in hopes of making an impact in that final."

After her gold medal-winning electrifying floor routine set to "Hava Nagila," you can bet Raisman will be doing everything in her power to defend her title. Winning gold again against Biles is unlikely, but hopefully she'll find her way onto the podium for a second time in the team final, which will be broadcast on Aug. 16 at 1:00 p.m. ET.

Basically, you'll have multiple chances to watch Raisman excel at this year's Games, so be sure you don't miss her!

More like this
What Is Jeanie Buss' Net Worth? The Lakers President Is Uber Rich
By Hugh McIntyre
Ryan Reynolds Brought Some Famous Friends To Wrexham A.F.C's Last Game Of The Season
By El Hunt
Jake Daniels Just Became The UK’s First Active Football Player To Come Out As Gay Since 1990
By Sam Ramsden
The 'This Is Us' Finale Featured An Adorable Season 1 Jack & Rebecca Easter Egg
By Grace Wehniainen
Get Even More From Bustle — Sign Up For The Newsletter