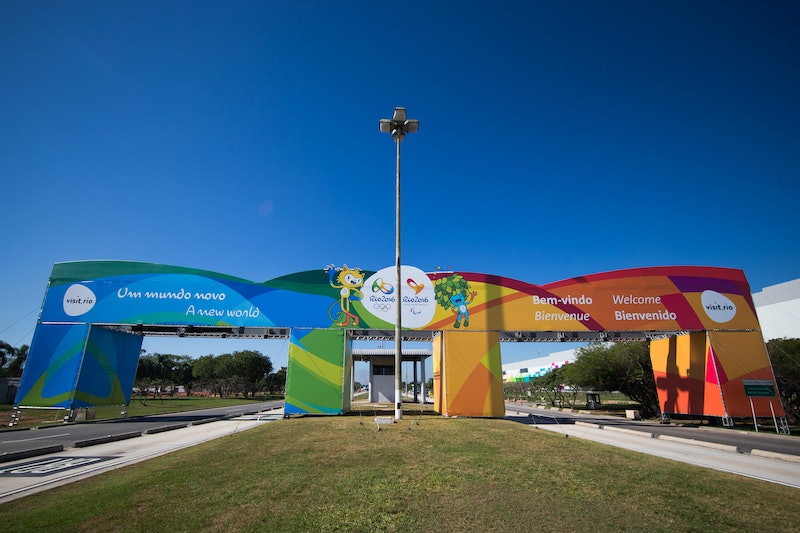 I can already hear the beginning notes of Leo Arnaud's "Bugler's Dream" in my head in anticipation of the 2016 Summer Olympic Games. A universal pastime, NBC and its affiliated stations are in charge of the 2016 Olympics TV schedule in the U.S. since they will be providing all of the broadcasts of the games from Rio de Janeiro, Brazil. If you're looking for some national pride after the particularly devastating events that have happened in America over the last couple of weeks, watching the 2016 Summer Olympics will hopefully help. And with so many sporting events occurring, a guide to the schedule of the Olympic Games is pretty much essential.

For 2016, NBC will be live streaming all of the Olympics competitions, like they have done for the past two Olympic Games in Sochi, Russia and London, UK, but if you prefer good old-fashioned cable, then you'll need to be a little patient if you're seeking a particular sport or Olympic team member. While the live streaming schedule for the Olympics has been set based on the Olympic games schedule in Rio, the TV schedule is still not finalized.

Before you get frustrated about not knowing exactly what date and time you can watch Michael Phelps swim or the U.S. Olympics women's gymnastics team dominate, understand that with events running from Wednesday, Aug. 3 until the closing ceremony on Sunday, Aug. 21, NBC — with its digital platforms and affiliate stations — will be showing 6,755 hours of the Olympics. That absurd amount of content is a pretty good explanation as to why the programming isn't 100 percent solidified yet. However, here is what NBC has released thus far about watching the Olympics on TV.

NBC, along with the NBCUniversal partners Bravo, CNBC, Golf Channel, MSNBC, NBCSN, USA Network, Telemundo, NBC Universo, and specialty channels (for the sports of basketball and soccer), are going to air 2,084 hours of Olympic programming on television. While NBC is most likely going to be the channel you go to for the big primetime events, if you have a specific sport in mind, it might end up on another channel.

As counterintuitive as it is, the games begin before the opening ceremonies with women's soccer kicking off (pun wasn't intended, but gotta leave it now) the Olympics on Aug. 3. NBC reports that NBCSN and USA Network will be the channels broadcasting that first day of soccer, so expect to tune into either one of those stations to see Team USA's first goal when they are scheduled to play against Team New Zealand at 6 p.m. ET. Just note that it's not yet guaranteed that the game will be on TV at the exact time it's being played.

NBC doesn't actually get involved until Friday, Aug. 5 when it will air the opening ceremonies. Rather than being broadcasted live, it was announced that the opening ceremonies will be airing one hour later than when they take place in Rio. No need for alarm since this is what the network did for both the Sochi and London opening ceremonies, so you can check out the parade of nations and the show at 8 p.m. ET.

During the two weeks of the Olympics, Bob Costas will be hosting the primetime coverage on NBC, which will happen most days from 8 p.m. to 12 a.m. The late-night coverage will air from 12:35 to 1:35 a.m. with host Ryan Seacrest. If you've got a flexible schedule, daytime coverage will also happen most days from 10 a.m. to 5 p.m. and night owls will be able to catch replays from 1:35 to 4:30 a.m. All of these times on NBC are the same whether you're in the ET, PT, or somewhere in the middle time zones.

While I already mentioned that USA Network will air some women's soccer, the go-to station for Team USA's women's soccer and men's and women's basketball is NBC's sports network — NBCSN. NBCSN will actually be the go-to station for all die-hard sports fans since they will be broadcasting 16 hours of Olympics sports a day, with a medal presentation happening each day from Saturday, Aug. 6 to Sunday, Aug. 21. So you can expect way more sporting events than just the ever-popular sports of soccer and basketball on this channel.

For your daytime fix of Team USA, the fittingly-named channel USA will also be a good place to check since most weekdays they will broadcast games from 9 a.m. ET to 5 p.m. ET. And just as NBCSN is providing most of the coverage of sports, the Golf Channel is unironically showcasing golf during the Olympics, with the men's competition happening Thursday, Aug. 11 to Sunday, Aug. 14 and the women's competition occurring Wednesday, Aug. 17 to Saturday, Aug. 20.

From there, the schedule is a little less intuitive with Bravo being the station to watch for tennis. Even though Bravo has broadcasted Olympics tennis in the past, tennis is not necessarily what I think of when I think of The Real Housewives network. The tennis coverage is scheduled to start on Saturday, Aug. 6 and last until the women's singles finals on Saturday, Aug. 13 and the men's singles finals on Sunday, Aug. 14. If you're a tennis fan, Bravo is your channel with the sport being shown from 9:30 a.m. until 10 p.m. ET for the first five days of play.

CNBC is also being brought into the fold with elimination-round coverage of basketball and volleyball, but during weekdays, the station will only broadcast Olympic games from 5 to 8 p.m. ET. And MSNBC will show a hodgepodge of Olympics sports, including beach volleyball, rugby, and water polo, with most of the network's coverage occurring from 12 to 5 p.m. ET.

Despite the TV schedule being a bit erratic and not fully official yet, the good news is that Rio de Janeiro is only one hour ahead of the ET time zone, so more events than ever will be broadcasted live via NBC and its affiliates. So gear up, because the 2016 Olympics are going to be a long two weeks of some serious TV watching and national pride.

More like this
Prince William Reveals Charlotte's Hidden Talent In Ultimate Proud Dad Moment
By El Hunt
Everything We Know About When To Expect Money Heist: Korea Part 2
By Kadin Burnett
Wait, What’s Going On With Ben In That Umbrella Academy Season 3 Post-Credits Scene?
By Gretchen Smail
Viktor Hargreeves’ Coming Out Scenes Are The Sweetest Part Of Umbrella Academy Season 3
By Gretchen Smail
Get Even More From Bustle — Sign Up For The Newsletter