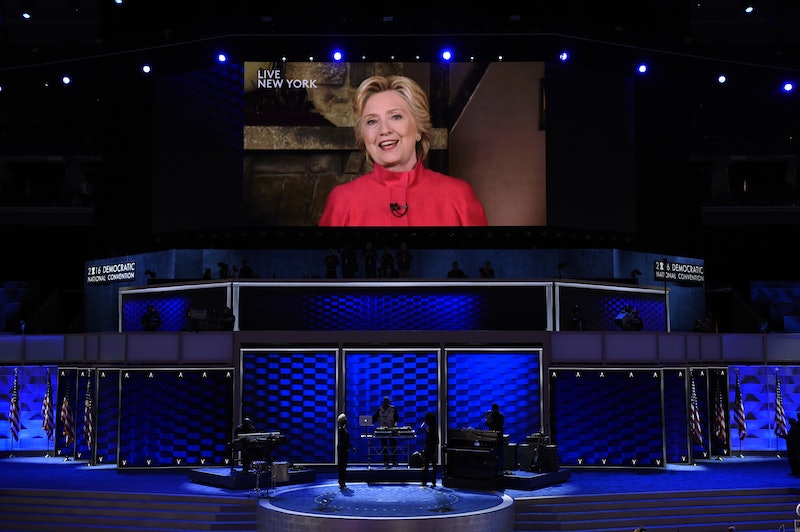 When millions of people have voted for you, more than two thousand delegates have pledged for you to be their party's nominee, and your spouse has outlined your entire life story on national television, what's next? Well, if you're Hillary Clinton, you call in to the DNC via satellite from New York later that day. You know, just to say hi.

"Hello, Philadelphia. I am so happy," Clinton said, glowing in a red outfit via satellite feed from New York. "It's been a great day and night. What an incredible honor that you have given me. And I can't believe we have put the biggest crack in that glass ceiling yet."

Clinton's statement followed Alicia Keys' performance, which in turn followed Bill Clinton's 45-minute tribute to his wife. After her performance, Keys asked attendees to vote for Hillary to prove that love defeats hate — a clear reference to Donald Trump's campaign.

As for Clinton herself? "Thanks to you and to everyone else who's made this victory possible. This is really your victory. This is your night," Clinton went on. To the little girls who may have stayed up late to watch the first woman in America became a major party's nominee, she noted, "I may become the first woman president — but one of you is next."

The explicit message to young girls reiterates what has become a key theme throughout this convention: Forcing parents to think about whether they'd prefer Clinton or Trump as a role model for their young children.

Clinton's short appearance at the convention, aka The Week of Hillary, capped off another star-studded evening of high-profile celebrities, politicians, and everyday Americans with unique stories openly advocating for Clinton. It's a stark contrast to The Week of Donald, which was notably missing many high-profile Republicans (Mitt Romney, John McCain, George W. Bush), and stuffed with C-listers.