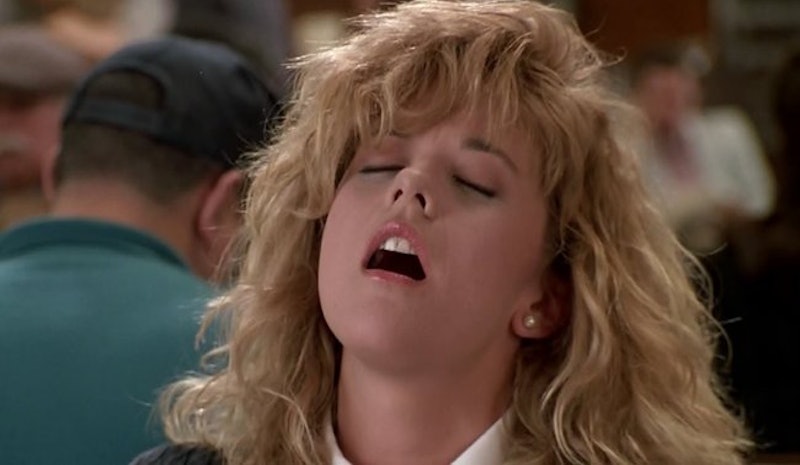 July 31, the holiest of days — National Orgasm Day, to be exact. And what better way to celebrate those sometimes elusive but frequently sought after magic moments than with 15 facts about orgasms.

Some of these facts were discovered by the 2015 SKYN Condoms Millennial Sex Survey, in which 5,117 men and women between the ages of 18 to 34 responded to survey questions about their current sex lives. One of the best findings from the study? Finally, the orgasm gap between men and women is shrinking, which can be attributed to changing attitudes about female sexuality and less stigmatization of certain sexual activities.

This is fantastic news not only because — well, because orgasms are great — but because they have so many hidden benefits. Whether they are improving our health, strengthening our brain function, or making us happier, orgasms clearly deserve their own day of recognition.

But whatever you do — don't celebrate National Orgasm Day by faking it. We have come too far to be anything but honest about our sexuality and right to pleasure and sexual expression. Celebrate the day by remembering orgasming isn't always easy, so don't be hard on yourself if it doesn't happen sometimes. Simply enjoy the process.

1. More Young Women Report Reaching Orgasm Than Ever Before

While women statistically and physiologically have a harder time reaching orgasm, the most recent SKYN Condoms Millennial Sex Survey demonstrated a shrinking of the orgasm gap between women and men. In fact, according to survey results, most of the women respondents — 89 percent — said they usually achieved climax.

2. Millennials Are Not Afraid Of Some Additional Help In Reaching Their ~Pleasure Goals~

And why is this orgasm gap shrinking? Things like lube, vibrators, and sex toys are no longer stigmatized or unwelcome in partner activities — and those all make sex a lot more pleasurable. More than one-fourth of the SKYN Condoms Millennial Survey respondents said they routinely use vibrators, and 43 percent said lubricants were a normal part of sex.

3. A French Idiom For "Orgasm" Translates To "The Little Death"

La petite mort, or "the little death," has been a slang term for orgasms for centuries. Orgasms provide a momentary transcendent, heavenly release — earning them the nickname.

First of all, some psychologists even prescribe sex as a stress-management technique because orgasms impact mental health so positively. Sexual pleasure improves mood by helping release tension and lower blood pressure. This happens because, during climax, cells in the hypothalamus (a part of your brain) release the chemical, oxytocin — aka the cuddle hormone — which literally makes you feel "warm and fuzzy." The more relaxed you are, the less tension in your body and the better you sleep (more on that later).

5. They Help Lessen Menstrual Cramps, And Can Even Shorten Your Periods (If You Have Period Sex)

Climaxing causes the muscles in and around your uterus to contract, which massages your menstrual cramps. Additionally, if you engage in period sex, orgasms have a kind of unexpected "plunger" effect — meaning that contractions help your uterus push out more of its lining. For some, that results in shorter periods.

6. You Can Listen/Submit To To A Curated Archive Of Real Female Orgasms Online

The website and art project, Orgasm Library of Real Sounds, aims to challenge male-centric notions of female sexuality and pleasure — teaching folks what "female pleasure really sounds like by listening to orgasms recorded by women like you, who are willing to remove the taboos imposed by society and by ourselves."

7. A Lot Of Women Are All About That Clitoris

More than half of women — 70 percent — reach orgasm through direct clitoral stimulation.

8. They Can Regulate Your Menstrual Cycle

When someone with a vagina achieves orgasm, it causes blood to rush to their pelvic region — so women experiencing regular orgasms are more likely to have 28-day cycles.

9. An Orgasm Before Bed Can Help Your Insomnia

At Groningen University in the Netherlands, scientists discovered that the amygdala — or region of the brain responsible for feeling fear — was barely active (if not completely inactive) in women experiencing orgasm.

12. Orgasms Are A Natural Headache Cure

In fact, one study out of the University of Munster in Germany noticed an improvement in 60 percent of its chronic headache-stricken subjects when they used sex as a natural treatment.

13. When She Wasn't Contributing To The Research That Eventually Gave Us Wi-Fi, Film Star Hedy Lamarr Performed The First Female Orgasm Outside Of Pornographic Movies

The 1933 Czech film, called Ecstasy, stars an 18-year-old Hedy Lamarr whose character, Eva, has a passionate orgasm on screen — the first explicit demonstration of female sexuality in mainstream movies.

14. Women Engaging In Penetrative Sex Report Most Frequently Orgasming When They're On Top

A survey by Glow, a period tracker app, found that 43.3 percent of women said they reached climax when on top of their partner — the highest percentage for any position.

15. Orgasms Are Great (Clearly), But Sex Can Still Be Enjoyable Without Them

Never feel bad (and never let your partner make you feel bad) if you can't achieve orgasm every time (if ever). It takes many women years of sexual practice to learn how to orgasm, and sex is still an incredibly fun and intimate journey regardless of where you end up. Figuring out how orgasms work for your body shouldn't be stressful — but fun.

So take that sentiment, and have a thrilling National Orgasm Day!