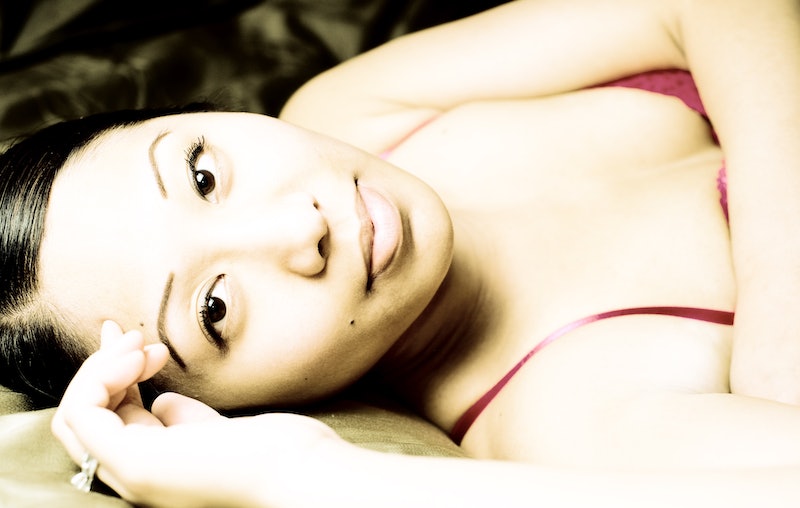 The ever-elusive orgasm. Some report that they have it with ease and high frequency. Some have to endeavor to pull it off. And some have never had one at all. But a new poll by the fertility and ovulation app Glow finds that there is one position with which women most often wind up having an orgasm. Though the app found that the majority of women usually have "on bottom" (aka missionary and the like) sex, the best position for the female orgasm happens when they are on top. It has about a 20 percent edge over other methods. When I first read this, I thought, "Humph. So much for women's lib."

But then I thought about it, and realized that "on bottom" sex is high on the list for its feeling of intimacy, warmth and human connection. There's something lovely about the weight of another human being on top of oneself. So perhaps all is not lost for feminism, and a little over half of women (54 percent) routinely have missionary, etc. sex because they prefer it. And then maybe they hop on top and get off, who knows. This poll only allowed women to pick one position in which they usually have sex, but most people usually change it up, so there's some wiggle room / a margin of error involved.

Glow found that women had the most sex on days 12 through 15 of their cycles. About half of the app's users are trying to conceive, so this makes sense — women are most fertile around ovulation, which typically happens about halfway through a 28-ish-day cycle. But although sex may occur most frequently on these four days around ovulation, Glow reported that orgasms are most frequent in the two to three days around the start of a cycle. This could be because hormone levels surge when menstruation begins, and some women feel more easily turned on during that time. Or maybe these women just really love period sex. Speaking of which, about three percent of all sexual activity logged by Glow users happens in the first five days of a woman's cycle. This is a little puzzling; What I deduce from it is that women who have sex while they have their period have a way higher chance of having an orgasm — but few actually do it. The ones who are seem to be having a pretty good time.

When Glow asked 2,400 women “Do any of these positions [woman on top, missionary and doggy style] get you to orgasm better than others?” here's what they said.

1,035 ladies reported that they have the best shot at an orgasm if they are atop their partner.

451 women said they most regularly experience orgasms when they are under their partner.

686 gals picked this all-fours position as the one most likely to trigger an orgasm.

228 women said that they most often have orgasms in positions not including the other options.