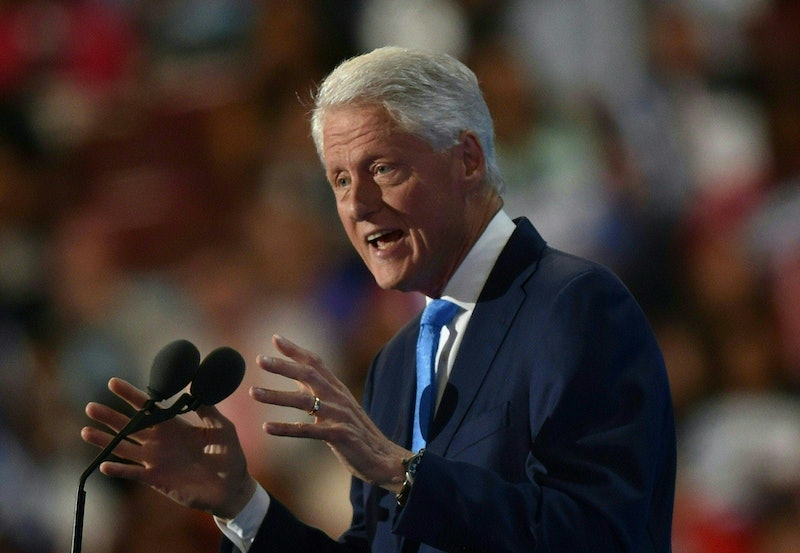 By the end of the second night of the Democratic National Convention, the Twitter jury was divided about one speech in particular: former President Bill Clinton's near 45-minute endorsement of his wife and newly minted Democratic nominee Hillary Clinton. But with intimate anecdotes about their early life together and his Southern charm, the hopeful First Husband did a rousing job of painting a humanized portrait of a politician often accused of being robotic. Still, these tweets on Bill Clinton's speech show a somewhat mixed reaction.

Those tweeting about the speech seemed to generally fall into one of three camps: commenting on the overwhelming historical significance of the speech, how long it was, or... hey, did Bill just make a Police Academy reference? (The film series, which Bill said he spent days binge-watching with their daughter Chelsea, then started trending.) But Bill's speech came on an important night — his bid for a unified Democratic party under Hillary was given not long after hundreds of Bernie Sanders delegates staged a walkout from the event, even as the former candidate conceded on the convention floor.

Though she overwhelming won her nomination, Hillary still needs all of the support she can get from the party's top leaders. Some Twitter users thought Bill was the perfect person to rally that support:

Others were a little more focused on the length:

And of course, some got stuck on that whole Police Academy thing...

So there you have it. And whichever way you slice it, Bill Clinton's speech made history — as the first convention speech endorsing a woman nominee and the first to reference that fine 80's film series.