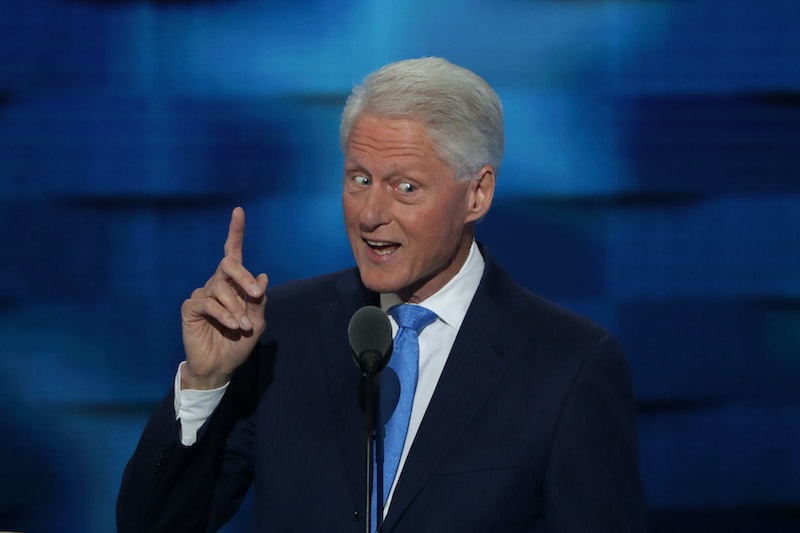 Forget 2008. Democratic nominee Hillary Clinton's path to the presidency began back in 1971 — or at least, that's how her husband tells it. Among numerous personal anecdotes was Bill Clinton's Police Academy mention, which proved that even presidents are allowed to binge-watch movies and television shows. And thanks to the series' cult following, Twitter went completely wild.

In his speech at the DNC Tuesday night, Bill laid out his wife's accomplishments, from their time together in law school to today. As a young activist, wife, mother, first lady, senator, and secretary of state, she had him impressed. However, she wasn't pleased by how many Police Academy movies he had watched in a row with their daughter, Chelsea.

After Chelsea's birth, Bill said that Hillary became primarily a mother for the next 17 years, "through nursery school, Montessori, kindergarten, through T-ball, softball, soccer, volleyball, and her passion for ballet." And then there was Police Academy. Here's how Bill put it in his DNC speech:

She became, as she often said, our family’s designated worrier. Born with an extra responsibility gene. Truth is, we rarely disagreed on parenting, although she did believe that I had gone a little over the top when I took a couple days off with Chelsea to watch all six Police Academy movies back to back.

The movie, if you're not familiar, is about an American city — you never know which — which has a shortage of police officers. So the mayor changes the rules and gets rid of any fitness or education requirements for new officers. And who else should then join the force but Steve Guttenberg and Kim Cattrall. Hilarity ensues. The movie was rated "R," so it's not difficult to see why Hillary may have questioned her husband's decision to show the movie to their young daughter.

For now, though, that's not what Twitter has focused on. Rather, most of the Twitter users seemed hung up on the fact that the popular ex-president has watched the American classic. The humanizing detail definitely overshadowed most of his speech. But that may not be the end of the world. Just like publicity more generally, any trending topic is a good trending topic.

Some gave him dad credit...

...to the point where they want to take Chelsea's place.

But I guess not everyone is a fan.

And of course, you could read into this as a reason not to vote for Trump.

Then there's this gross Trump vs. Clinton dad comparison.

And of course, word on the street is that they're looking to give Bill a job when Hillary wins.

Or have Joe help him.

Then there's the internet mashing up Clinton and Police Academy already.

Now to win the election, Hillary just has to figure out which cult classic Bernie Sanders supporters can't get enough of. If this reaction carries over, she'll have November in the bag.