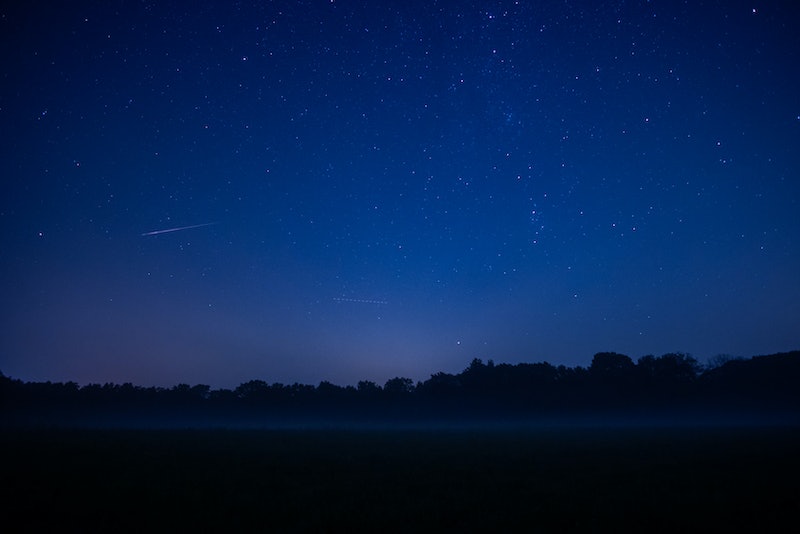 As if we needed more reasons to love summer, we've got another: a meteor shower experience unlike any other. The Delta Aquarids meteor shower typically debuts around July 12 every year, ending around August 23. But this year, the peak of the shower is July 28 and 29 — which means tomorrow, folks, so break out the telescopes and turn your eyes skyward. You're not going to want to miss this one.

In the most basic terms, a meteor shower occurs when the Earth passes through debris from a broken-up comet. The Delta Aquarids leave behind beautiful trails of ionized gas that last up to a couple seconds after the meteor has passed; keep a sharp eye out, though, because only five to 10 percent of these meteors leave a train. The gas left behind burns up in the atmosphere about 60 miles over our surface, making for a perfect nighttime experience, particularly for anyone who can escape the bright lights of city life.

The best time to watch the Delta Aquarids in particular is from midnight to 2:00 a.m. for all time zones on peak nights. The meteors come from the south; but although you can get a really good view in the southern hemisphere, where the meteors will likely be shooting right overhead, middle latitudes in the northern hemisphere can witness anywhere from 10 to 20 meteor per hour in dark skies.

The Delta Aquarids aren't the only meteor shower on our radar (literally) this summer, either; the Perseid meteor shower is expected next month, in August. The two showers are expected to overlap, but don't worry — it's totally possible to tell one from the other. While the Delta Aquarids come from the south, the Perseids come from the Perseus constellation, meaning the north or northeast. So, if you're one of those people in the southern hemisphere, as mentioned, look for the Aquarids above you, and search for the Perseids coming from the northern horizon.

The darker, the better. So if you can, drive away from the city to escape the light pollution as best you can. Happy meteor-hunting, friends.