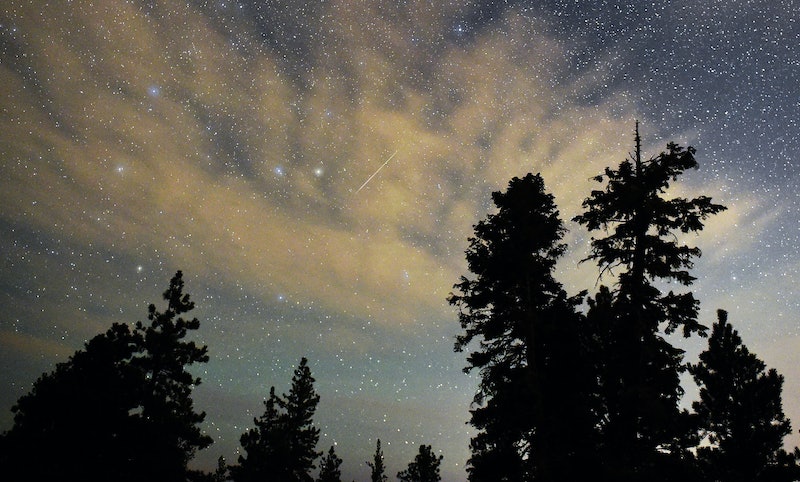 The Perseid meteor shower is entering its grand finale Thursday evening, and the annual stargazing event is especially stellar this year thanks to the new moon allowing for more visibility. You don't even need a telescope; this single Perseid meteor shower photo is gorgeous and will get the job done for you. Shared by Discover Space Today, the image from Alexis Manson perfectly captures the majesty of the night's sky during this special event. Manson took the photo in Soutra Aisle, a Scotland site with an ancient hospital dating back to the 12th century. Because of its desolate location, there is little light pollution, making it far easier to see falling meteors with the naked eye.

The dimly lit rocky rooftop of this medieval hospital looks almost as ethereal as the meteors coming down. Composed of debris from the Swift-Tuttle comet, the falling meteors make up just one portion of the comet's eccentric orbit. It takes the Swift-Tuttle well over a century to orbit the sun. Its oblong path spans even further than Pluto's orbit. Its path is so large, that it will take until 2126 for the Swift-Tuttle comet to be visible from Earth again. A constant trail of dust from the Swift-Tuttle falls right along the path of the Earth's orbit. The density of the dust is apparent in Mason's photo.

This year was an especially good year to watch the Perseid meteor shower, given the moon's phase. Only occasionally does the moon's phases coincide with it. The last time there was a new moon at the same time was in 2007. Even better, the International Space Station's position during the height of the event allowed for even greater visibility. At the meteor shower's most active, the ISS was floating over the UK and heading south. A missing ISS made allowed for an even deeper contrast and made Manson's photo even more dynamic.

According to Space.com, meteors were thrust even closer to Earth this year thanks to their proximity to Jupiter's gravitational field. Only during the summer does our atmosphere come in contact with Swift-Tuttle debris. As meteors enter the Earth's upper atmosphere, they reach speeds of up to 130,000 miles per hour, making for a vibrant, fast-moving meteor shower. According to NASA, at its height, as many as 100 meteors fall per hour. One such fast-moving meteor is clearly visible on the left-hand side of Manson's incredible photo.

For those unable to view the meteor shower, NASA broadcasted a live-stream on their Ustream and via NASA TV. In addition to Manson's photo, a gorgeous time-lapse of the Perseid meteor shower is also available care of photographer Ben Adkison on CNN. The next visible meteor shower is Orionids in October, its peak activity occurring the 21 and 22. NASA says the shower is quick and vibrant and best viewed just before dawn.