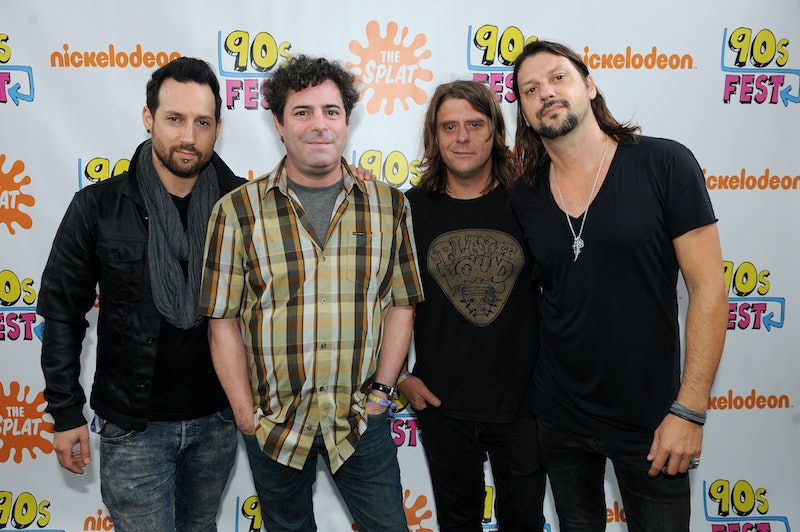 You can count this on the list of things I thought I'd likely see not one second before hell froze over. According to Entertainment Weekly, Smash Mouth has released a new song, called "Love Is A Soldier," with DJ Specter. But, here's the catch. It's not just any old upbeat rock jam. "Love Is A Soldier," is, wait for it... an EDM song. Yes, that Smash Mouth. No, I am not kidding you. I would never joke about something as serious as Smash Mouth. Shame on you. This is a real situation we have here, and there is absolutely no time for foolishness.

While I am all for bands trying new things, I have to admit, before I heard the tune I felt that this was a grave injustice to cohesiveness of my Smash Mouth-sung childhood anthems. How could an EDM song be allowed to infiltrate my childhood track list? EW points out the band's Shrek fame with, "All Star," but that's merely scratching the surface. What about, "Walkin' On The Sun," or, "Then The Morning Comes," and "I Can't Get Enough Of You Baby"? The ways I used to blast these songs on my Sony Walkman as I strolled around the neighborhood won't soon be forgotten. And they can't make me forget.

OK, they didn't have to make me, I did so willingly. Whatever. When I stopped resisting change and listened, somewhat begrudgingly, and I have to admit that Smash Mouth's foray into Electronic Dance Music ain't half bad. And that's mainly because they don't stray too far from the distinct sound that makes them, them, despite dabbling in a different genre. It may not be everyone's cup of tea, but credit should be given where it's due — "Love Is A Soldier" is actually kind of a jam. This is definitely a song that people can and will dance to, without the guilt of betraying the Smash Mouth sound we all grew up on.

Ultimately, though, you should be the judge. You can check out the song and lyric video for Specter vs. Smash Mouth's, "Love Is A Soldier" below: