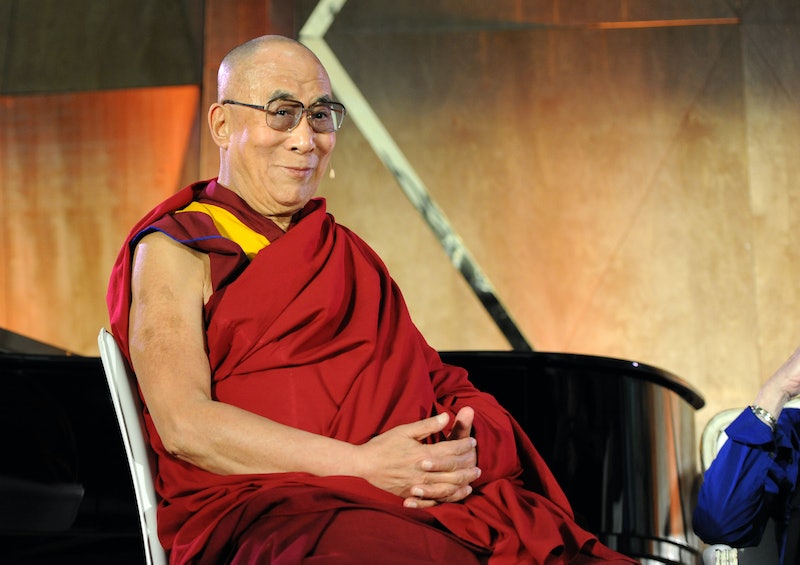 When His Holiness speaks up about world issues, people pay attention. The Dalai Lama voiced his support for gay marriage during his latest tour of the United States, calling it "individuals' business." The self-described "simple, Buddhist monk" is all for peace and equality, so it makes sense he backs marriage equality — but there's a catch. Only non-believers of the Buddhist faith are included in his rationale that gay marriage deserves support, which isn't quite the ringing endorsement we were hoping for.

In an interview with Larry King, the Dalai Lama said same-sex marriage should be "up to the country's law." He went on to explain, in English: "If two people — a couple — really feel that way is more practical, more sort of satisfaction, both sides fully agree, then OK."

And while he referred to marriage equality as a "personal matter," the Dalai Lama still noted that if people followed specific traditions or religious beliefs, they should adhere to those values. Unfortunately, the Buddhist faith perceives homosexuality to be "sexual misconduct."

At a 1997 press conference in San Francisco, the Dalai Lama said, "from a Buddhist point of view, men-to-men and women-to-women is generally considered sexual misconduct... From society's viewpoint, mutually agreeable homosexual relations can be of mutual benefit, enjoyable and harmless."

In other words, it's only for non-Buddhists that the Dalai Lama supports marriage equality.

But at least we can all agree on one thing: "Bully, abuse — that's totally wrong. That's a violation of human rights," he told Larry King, when the subject of homophobia came up.

The Dalai Lama's recent comments provide a clearer insight into his stance on gay marriage, though they remain true to his distinctions between what he considers believers and non-believers. The spiritual leader is progressive in many of his views, including support for the prospect of a female successor.