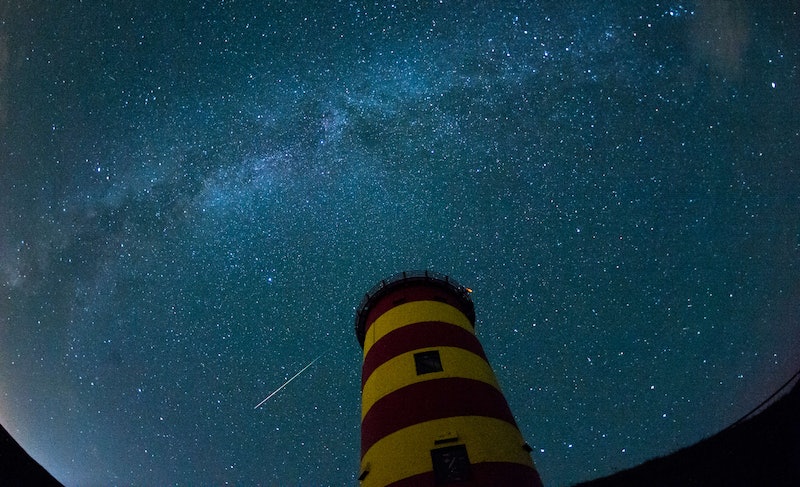 There are few things more magical than spending a hazy summer evening staring up at the sky in search of shooting stars — and, thanks to the upcoming Delta Aquarid meteor shower, this summer is about to get a celestial boost. Naturally, you may be wondering how to watch the Delta Aquarid Meteor Shower, in which case I've totally got you covered. Mark your calendar for July 28 and 29 (yes, tomorrow!), and take note of the following tips for maximum stargazing glory.

But first, a few details about this meteor shower. The Delta Aquarid meteor shower occurs annually between July 12 and Aug. 23. This years, as mentioned above, it peaks tomorrow and Friday, July 28 and 29. In a spectacularly beautiful showing, these meteors leave glowing trains of ionized gas in their wake that can last for up to two seconds after the meteor passes. The shower's point of origin — or radiant point, for you astronomy buffs — lies in front of the constellation Aquarius the Water Bearer. The second to last meteor shower of the summer season, the Delta Aquarids come from the south and travel through Earth's atmosphere at roughly 90,000 miles per hour. Yowza!

By now your'e undoubtedly dying to know how to see this spectacular celestial display, so let's get into it, shall we?

Also, drinking coffee wouldn't be a bad idea, because the best time to lay eyes on this spectacle in space is between the hours of midnight and 2:00 a.m. for all time zones on peak nights. You'll be starry-eyed from one evening straight into the next morning (even if those eyes have bags under 'em).

2. Scope Out a Spot with an Unobstructed Sky View

To be clear, this spot should also be dark. Light pollution, which is abundant in urban areas, will hinder your ability to see the Delta Aquarid meteors. The ideal spot will boast a clear view of the sky unobstructed by trees, buildings and tons of city lights. The good news is that, since the moon will be approaching its third quarter waning phase, the sky will be a bit darker than it has been in previous years; as a result, the meteor show should therefore be even more dazzling.

If you're in the northern hemisphere like I am, you may be at a slight disadvantage, as the Delta Aquarids are said to favor the southern hemisphere. However, you should still be able to see your fair share of meteors if you're at mid-northern latitudes. The shower could produce as many as 10 to 20 meteors per hour — with around five to 10 percent of those leaving a persistent meteor train.

If all else fails and you can't seem to find an ideal spot away from the glow of artificial light (or if trekking outside at midnight just isn't your scene), you can always stay inside and live stream the Delta Aquarid meteor shower right here.

More like this
How To See The Lunar Eclipse On May 15-16, 2022
By Kaitlyn Wylde
The 6 Best Balaclavas To Keep Your Face, Head & Neck Comfortably Warm
By Jenny White
Here's Your Daily Horoscope For May 16, 2022
By Mecca Woods
When Is The Next Full Moon? Your 2022 Calendar
By Nina Kahn
Get Even More From Bustle — Sign Up For The Newsletter