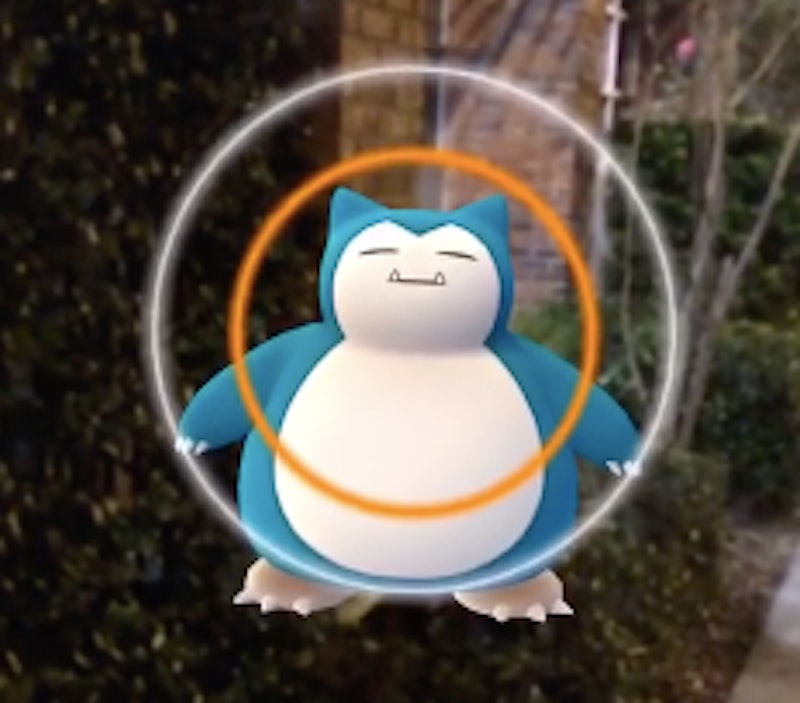 After three weeks of playing “Pokemon Go” you’ve most likely grown bored of launching Pokeballs at countless Doduos and are on the hunt for some more unique Pokemon to beef up the ol’ Pokedex. One of the most hilarious Pokemon in the canon is Snorlax, the nap-loving, Monday-hating, narcoleptic monster that we can all relate too — but can you catch Snorlax in "Pokemon Go"? This coveted normal-type Pokemon whose two goals in life are eating and sleeping as much as possible (in other words: me), is rare but not impossible to catch in the AR game.

If you aren't yet familiar with Snorlax, it looks like a combination of a oversized sloth and bear. Pokemon.com writes, "Snorlax's typical day consists of nothing more than eating and sleeping. It is such a docile Pokémon that there are children who use its expansive belly as a place to play." Snorlax weights over 1,000 pounds and evolves from the baby Pokemon Munchlax. If you haven't heard of this first-tier Poke before it's totally understandable, as there is hardly anything written about Munchlax online. Like its evolved form, Munchlax also loves to eat and “hides food under its long body hair. However, it forgets it has hidden the food.” So... just like some mustachioed boyfriends I've had. The parallels in this game, man — it's art imitating life.

Despite Snorlax's sleepy nature, it is a pretty powerful Pokemon. According to the secret "Pokemon Go" community forum, The Silph Road, Snorlax is ranked fifth in best combined stats. It impressively falls just after three legendaries and Dragonite. Snorlax has an incredibly high stamina at max 320, which is the second best stamina in the entire Pokemon world. A perfect Snorlax will also have some of the best moves to use in battle when calculating damage per second. Snorlax's "Lick" is ranked as the fourth best "normal" move and "Body Slam" is the first most powerful "special" move. If you are looking to defend your local gym from marauding trainers, a high CP Snorlax is a great choice.

Just like other rare Pokemon, Snorlax can be hatched from a 10km egg. These eggs are fairly easy to obtain from Pokestops, but you will have to log quite a few steps to hatch them. You may walk so much that you eventually come across a Snorlax in the wild (oh the irony!). Snorlax is one of 17 rare Pokemon that can be born from these 10km eggs, so your chances are fairly good!

Looking for a Snorlax in the wild is a bit trickier. One theory proposed on Reddit by a trainer with two wild Snorlaxes is that these rare Pokemon can be found snoozing along roads in the quiet suburbs and near stores peddling sweets and baked goods — as if we needed another reason to go buy a doughnut right now. However, the tech site Mobile Apps writes that Pokemon spawning sites are entirely random, writing, "At this point we want to make this clear: there is no set way to find a particular Pokémon anywhere." It is possible that all these location-based theories may be for naught, though I choose to remain a staunch “Pokemon Go” conspiracy theorist.