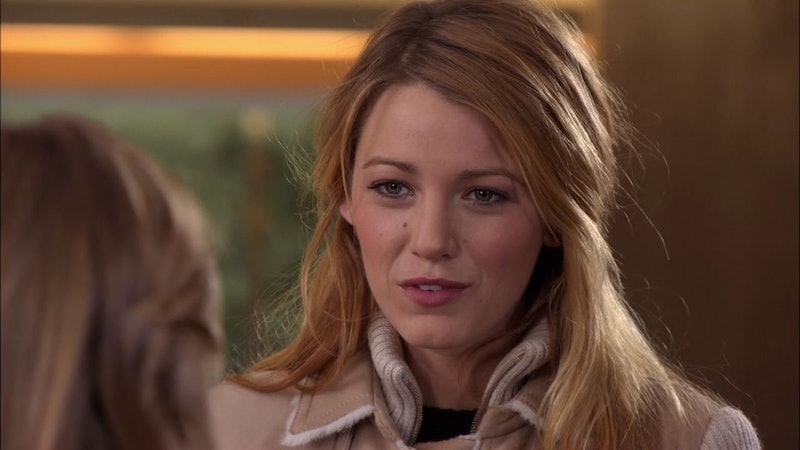 Blake Lively is potentially making all of our nostalgic high-school television dreams come true by admitting that she is totally, 100 percent up for reprising her role as Serena on Gossip Girl in a potential reunion. Well... OK, it's definitely a firm maybe, anyway. Lively told E! in response to a query about a possible Gossip Girl reunion in the future: "I don't know, it would be fun. We had such a great time doing that that I think we all would really enjoy that."

Guys. This is kind of a big deal. While a fair few of the minor characters on Gossip Girl are re-castable (I mean, I wouldn't want them to be, but wasn't Gossip Girl's very own Leighton Meester's character recast in the Veronica Mars revival film because Meester was unavailable? It worked in their case!), I'd argue that Serena (Lively) and Blair (Meester) are at the center of the show, both in terms of charisma and plotting. As such, arguably a yes from Serena means the revival is halfway there.

The only fly in the ointment is that the other female lead, Meester, might not feel the same. In fact, she's been downright dismissive of any chance of a Gossip Girl reunion, batting off a question during an interview with Broadway's Electric Barnyard about her ever doing Gossip Girl again with one single, damning "Nope." And while I could live with minor characters being recast, Blair never could be.

In the words of the chicest woman on the '00s small screen herself, "Nope." No friggin' way. Who could pull off that trademark mix of vulnerability, cattiness, and sheer divaness that was Blair like Meester did? Who can wear headbands without looking eight years old? Who has the same amount of smoldering chemistry with Ed Westwick?

Still, this does mean pressure is escalating. Lively's comments come on the heels of actor Sebastian Stan supporting a Gossip Girl revival in May. Sure, Stan wasn't exactly a major character on the show — he played Nate and Chuck's frenemy Carter Baizen way back in Season 1, who ended up sorta dating both Blair and Serena. But still, that's two of the cast talking about a reunion in 2016. And given the how many remakes and revivals we're seeing greenlit now, I'd argue that this could totally get to be in the works if other actors hop on board. I guess only time will tell. But this media attention's got to be helpful — like, in the immortal words of Eric van der Woodson, "The only thing thicker than blood is the ink on Page Six."

Amen to that, and here's hoping the press has enough power to bring us back Gossip Girl.

More like this
The First Trailer For 'That '90s Show' Includes So Many Nods To The Original Series
By Jack Irvin, Alyssa Lapid and Grace Wehniainen
'Gilmore Girls’ Lauren Graham Just Revived Our Hopes For A New Reunion
By El Hunt
The 'Love Actually' Reunion Is Missing A Major Player
By Bustle UK
These 'Criminal Minds' Throwback Photos Show The Cast’s 17-Year Evolution
By Grace Wehniainen
Get Even More From Bustle — Sign Up For The Newsletter