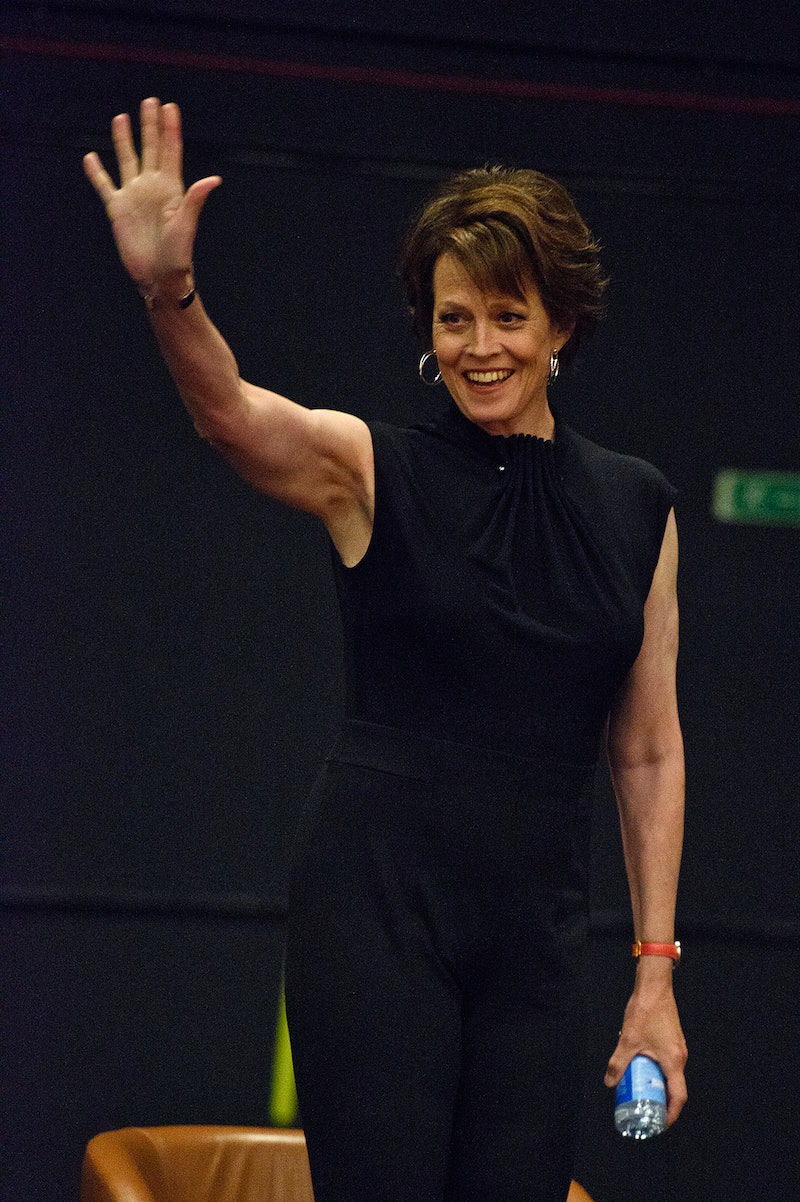 Among the Hollywood star-power set to speak at Wednesday’s Democratic National Convention — which includes actors Angela Bassett and Star Jones and director Lee Daniels — is the alien-ass-kicking actor Sigourney Weaver, who will address the DNC in Philadelphia ahead of the night’s keynote speakers, vice presidential nominee Tim Kaine and President Barack Obama.

Weaver has what some might call a unique perspective on Democratic presidential nominee Hillary Clinton’s predicament: she played a character that many argue was closely modeled on Clinton’s own life in the 2012 USA miniseries, Political Animals. In the show, Weaver played Elaine Barrish, a former First Lady turned Secretary of State, attempting to balance her private and public life while also following her own political aspirations.

In a departure from the real-world model, in Political Animals Barrish has divorced her former president of a husband (played by Ciarán Hinds as a much ickier and less-beloved ex-prez than the Bill Clinton we saw at the DNC Tuesday night). The miniseries, which received generally favorable reviews, saw Weaver caught up in much presidential intrigue, including an over-the-top finale involving (spoiler alert) a plane crash and the 25th Amendment.

In an interview in 2012 with NPR about the show, Weaver commented that “We've had three remarkable women who've been our secretaries of state in our last three administrations, but somehow we're not willing as a country to elect a woman president.” It may have taken four years, but it’s possible Weaver’s statement will soon be proven wrong.

This isn’t the first time that Weaver has played a first lady, either: she co-starred with Kevin Kline in the presidential comedy Dave, which was released the year that the Clintons originally moved into the White House.

Though the Democrats haven’t featured personalities with the same “star power” we saw at the Republican National Convention last week — who, really, can compete with '80s throwback Scott Baio and soap opera star Antonio Sabato, Jr.? — there has been a decent amount of Hollywood support. Meryl Streep, Elizabeth Banks, Lena Dunham, America Ferrara, Tony Goldwyn, Erika Alexander all spoke (and that was just Tuesday night), not to mention a convention-defining mic-drop from comedian Sarah Silverman on Monday night that has largely been credited with helping rid the DNC of its early discord.

Whether Weaver delivers the same kind of heat remains to be seen, but few will have her insight into what the Clinton — who historically became the first woman to receive a major party's presidential nomination — is going through.

More like this
Watch Benedict Cumberbatch Lead An ‘SNL’ Medieval History Lesson On Roe v. Wade
By Grace Wehniainen
Celebrities & President Biden Are Enraged By The Leaked Roe v. Wade Decision
By Alyssa Lapid
Dinner To Celebrate Diversity In Journalism Brings Out Media Leaders
By Brianna Kovan
Playing A Scrub Nurse On 'Grey’s Anatomy' Made BokHee An Instagram Royalty
By Brad Witter
Get Even More From Bustle — Sign Up For The Newsletter