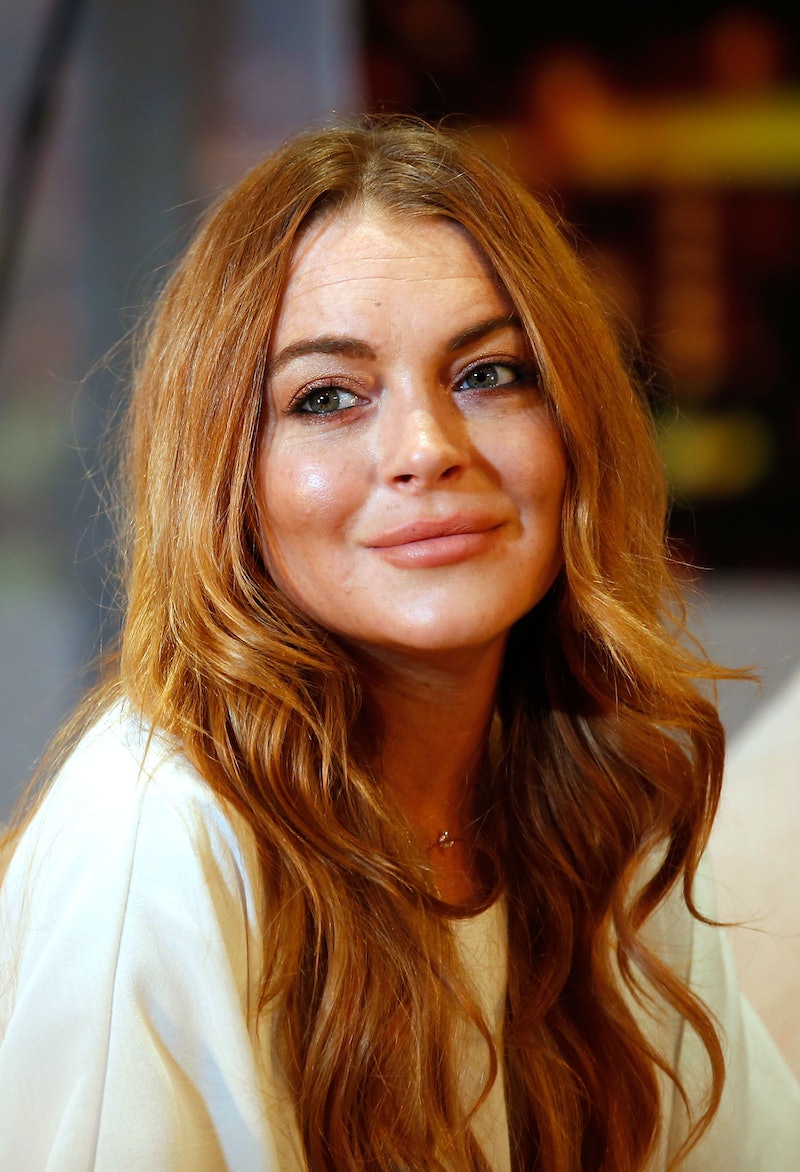 It's been an eventful week for Lindsay Lohan. Amidst news of an alleged blowout with fiancé Egor Tarabasov, Lohan seemingly announced her pregnancy on Twitter. However, the message itself was a bit confusing, including a link to a photo from her ABC Family movie Labor Pains, in which her character fakes a pregnancy to avoid losing her job. In the since-deleted tweet, she wrote, "lindsay lohan labour pains trailer - I am pregnant!!" Now, her father Michael Lohan has claimed Lohan told him she's pregnant in an exclusive interview with Page Six TV. He claimed to the site, "She texted it to me and told me." As for what she said, he claimed she texted, "Daddy, I’m pregnant."

As for the alleged incident with Tarabasov, Michael claimed, "What she says happened happened. It's a serious matter." When talking about why he's discussing this, the famous father told Page Six, "When someone's going to attack my daughter and people are going to start twisting it and saying she's a liar, I'm going to speak up for her and I'm going to defend her." Bustle has reached out to Lohan's rep for comment on the alleged incident with Tarabasov and on Michael's claims that she said she was pregnant, but has not yet received a response. Tarabasov could not be reached for comment.

I would appreciate if these speculations regarding my personal life would respectfully come to a halt. Unfortunately, a private matter has become more public than I can control and I would be extremely grateful if my fiancé and myself could discuss our personal matters on our own.

Although she deleted that post, the following one remains:

Here's an excerpt from the caption:

Dear friends. I'm good and well. #ATM I am taking time for myself with good friends. I am sorry that I've exposed certain private matters recently. I was acting out of fear and sadness... We all make mistakes.

The only thing that fans know for sure is that Lohan is taking some time to focus on herself, as she should. Whether or not the baby news is true, only time will tell. Sure, Michael makes it seem like the case, but again, let's take the news with a grain of salt before getting too excited.

More like this
20 Celebrity Couples Who You Forgot Dated In 2002
By Jake Viswanath
Sandra Bullock, Girlboss Extraordinaire
By Matt Harkins & Viviana Olen
Spice Girls’ Net Worth: The Richest Member Is Wealthier Than The Rest Combined
By Hugh McIntyre
Harry Styles Addresses The Theory That His New Song "Daylight" Is About Taylor Swift
By Jake Viswanath
Get Even More From Bustle — Sign Up For The Newsletter