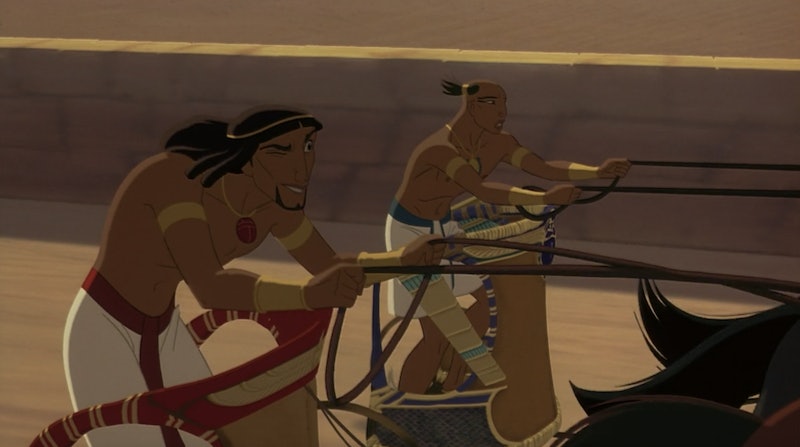 I may not be Jewish or Christian, and I’m very barely Catholic, but I definitely recognize The Prince of Egypt as a biblically epic adaptation. Of course, there was natural sadness when The Prince Of Egypt play was cancelled — but honestly, it may for the best: mostly because The Prince of Egypt is an animated masterpiece that begs to be worshipped from a screen versus a stage.

I stress the word “animated,” because the movie is visually stunning. From swirling pink sands to shimmering scarlet waters, that animation team deserves All The Awards. Sadly it reaped none, but the film did win the 1999 Oscar for Best Original Song (the track was “When You Believe” by Mariah Carey and Whitney Houston, and it was beautiful.) Aesthetics and accolades aside, though, this film is especially strong when it comes to storytelling. It leverages those elements to highlight the crumbling relationship between Moses and his adopted brother Ramses, something that makes this particular tale of the Plagues of Egypt extra special.

Although, being fair, the Rugrats Passover episode is also pretty swell.

In case you’ve forgot how wonderfully done this movie actually is, scroll down and enjoy this refresher on all the magical things in The Prince of Egypt.

2. This Stunning Swirl Of Clouds That Foreshadow The Atmospheric Wonderland Ahead

3. The Way This Movie Manages To Convey Mass, Both When It Comes To Quantity And Size

There's like trillions of tiny people under these monoliths, it's crazy.

Who, BTW, ends up being the strong-jawed Moses.

6. The Silky Sheen Of The Water Paired With This Basket That Looks Like It's Straight-Up Nintendo 64 Graphics

7. That Time Before Moses And Ramses Become Enemies And They're Just Adorably Bro-ing Out

"Hey, Rameses, how'd you like your face carved on a wall?" "Someday, yes."

In context, this is a lot less murder-y, and a lot more like smack-talk with your siblings during a really intense lap in Mario Kart.

8. Good Use Of Side-Profiles And Silhouettes Simultaneously

And again, you never get the sense that Moses and Ramses are in a tiny suburb — the movie really shows the breadth of Egypt and the world around them.

9. All The Creative Proportions Seen Here

The Pharaoh is elongated, Ramses and Moses' mom has hair-full-of-secrets — a lot of experimentation is going on here.

10. "Moses, You Will Never Have To Carry A Burden Like The Crown I Will Pass To Rameses. He Must Not Allow Himself To Be Led Astray, Not Even By You, My Son."

Lots of pretty shades of foreshadowing in the Pharaoh's speech.

11. But Again, It's Important That We Show These Two As Fun-Loving Jokesters Before This Movie Takes A Dark Turn Towards Bloodshed And Betrayal

Everyone aside from the film's crooked minion-duo gets humanized appropriately.

And oh, how they spin!

Moses' eventual wife Tzipporah is able to escape captivity and leave a bunch of tied up high priests (and dogs) in her wake. Also, she's voiced by Michelle Pfeiffer, which gives her extra badass credential.

14. The Fact That Moses' Has An Entire Inner Monologue In Song

I wish my existential crises were this musical.

15. Also, This Segue Into An All-Hieroglyph Total Breakdown

Again, Moses has great style when it comes to these sort of dramas.

16. This Look Of Pure Disgust When Pharaoh Seti Tries To Sooth Moses' Nerves About Infanticide With "They Were Only Slaves."

What's that? Oh, it's just the sound of my heart breaking in two.

18. The Utterly Ridiculous Way Camels Are Depicted In This Movie

Not that camels are the most elegant of creatures to begin with, but look at that thing.

20. That's A Really Nice Detail In His Pupil

21. This Joyous, But Soon-To-Become-Disastrous, Reunion

Take another little piece of my heart, why don't you?

22. This Song That Lists All The Egyptian Gods, All With Names That I Cannot Pronounce

So you know, mad props for that.

23. The Hilarious Way That The High Priests Try To Mimic Moses' Blood Water As If To Say, "See, Our Gods Are Powerful Too," But No

24. This Moment When Ramses Is Like Nine Plagues Deep And So Sick Of Moses But There's A Fleeting Moment Where They Reminisce Together

And it just hurts so good.

25. The Fact That This Movie Isn't Sanitized At All Because Ramses Totally Loses His Son In That Last Plague

Not advocating this scene at all, of course. Just, it's been proven time and time again that the Bible is hardcore stuff, and it's interesting to see this children's flick be so upfront about it.

Understandably, this has been an emotional couple of years for him.

27. And Finally, The Parting Of The Red Sea, Which Is Everything You Wanted And More

Convinced yet? To see this stunning piece of work in action, make sure to stop by Netflix.