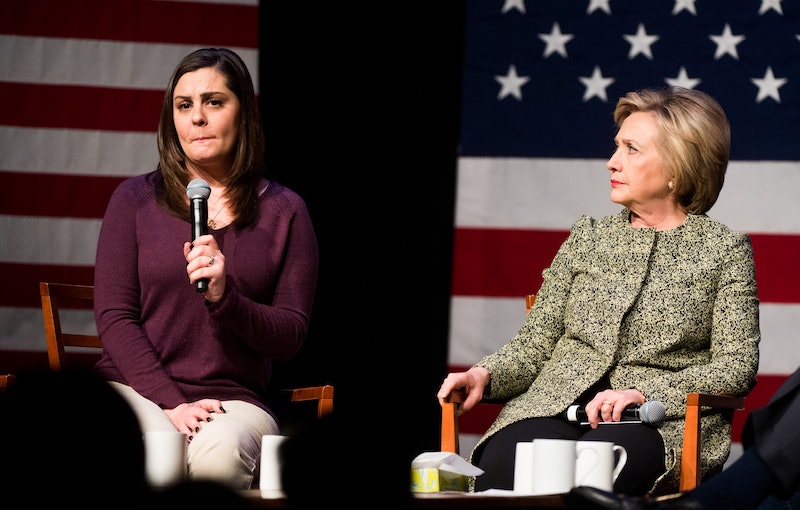 Gun control reform has been a centerpiece for the Democratic platform this election season, and Wednesday, the issue will get its moment on the main stage at the DNC convention. Erica Smegielski, daughter of Sandy Hook Elementary School principal Dawn Hochsprung, will be the face of the issue. In support of Clinton's efforts for reform, Smegielski confronted her memory of the horrific day as a way to honor the principal who died lunging at the gunman trying to stop him, which ultimately ended the educator's life.

It's the issue that could have meant the difference between Erica's mom seeing her get married or not — something she wasn't able to do because of her untimely death at the hands of gun violence — and it's the issue that kickstarted Wednesday's line-up of speakers, serving as one of the opening acts for Vice President Biden and President Obama. The DNC premiered a video about Smegielski and her mother at the convention in an effort to rally support for Clinton, highlighting her capacity to impact gun control reform. Smegielski says in the video, "No one is fighting harder to reform our gun laws than Hillary."

In the video's open, Smegielski describes the surreal experience of losing a parent to a school shooting, how her "wedding was one of the last things [she] planned with [her] mom," and how, months later, she went through with the "bittersweet" day missing the one person she always counted on.

Over B-roll of the school's sign swinging in the wind reading, "Sandy Hook: Visitors Welcome," covered in police tape, Smegielski explains how the traumatic experience was so overwhelming that she was in denial until she saw her mom's name in black and white as one of the reported victims. It was the anger of realizing that her mother didn't just die, "[she] was murdered" that sprung her into action and pushed her to become an outspoken gun control advocate.

Now she is the partnerships manager for the Everytown For Gun Safety movement and speaking on a national stage, urging for change around the issue. Through her activism, she's developed a relationship with the Democratic candidate. Clinton has called on Smegielski's story, mentioning her by name, in former gun control speeches.

And Smegielski even spoke about Clinton on one of the campaign stops in Hartford, Connecticut, saying of the first female presidential nominee of a major party: "[Hillary] reminds me of my mother — she isn't scared of anything."