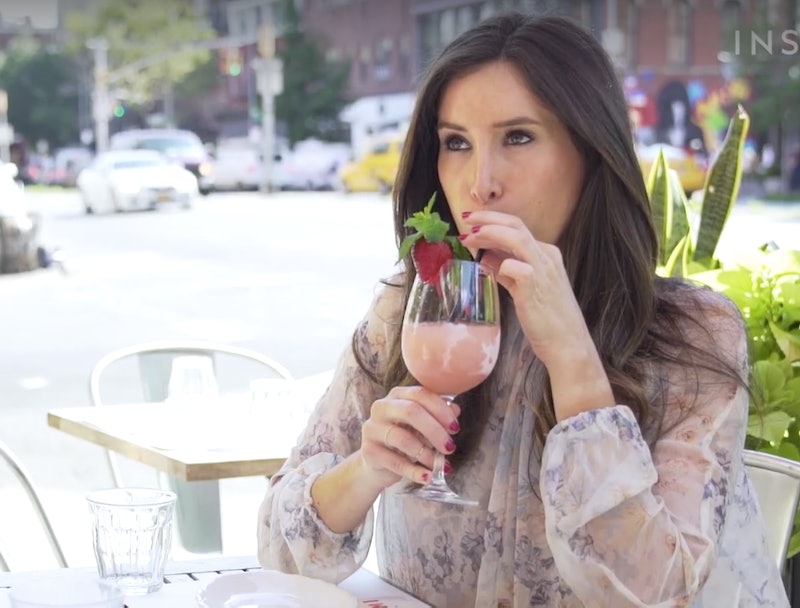 Holy Instagram likes, Batman! There's a new warm weather drink sliding out of summer obscurity just in time to liven up your feed — Frose, or frozen rose, is officially the most delicious (and hands down most adorable) drink of 2016. Imagine all of the most delicious parts of summer combined into one fruity cocktail, and that is basically what Frosé is in a nutshell. And really, guys, Instagramming aside — if we're all going to collectively survive the massive heat dome sweltering the U.S. right now, I don't think I'm stretching too much by saying this is probably our last hope.

Bar Primi in New York is responsible for what might just be the greatest stroke of genius since the dawn of pink wine. According to Justin Sievers, the general manager of Bar Primi, spoke to INSIDER about the inspiration for the drink. According to him, the idea for Frosé was borne from simple curiosity about what would happen to rosé if it were put in the slushie machine. A few test trials later, they had a perfect recipe marrying rosé, vermouth, and strawberries. It's already so sweet that you don't even have to bother adding sugar! (Although, y'know — live your best life if you still feel the need.)

Feeling some mad FOMO because you're not in NYC to try it for yourself? Fortunately, Sievers and INSIDER took viewers through the process of making this #blessed treat.

Even if you don't have a gigantic restaurant-grade slushie machine (what were you thinking leaving that off your apartment appliance list?), it looks like you could attempt to replicate this yourself! Perhaps not to the same level of glory as Bar Primi, but really, can you go wrong with rosé involved?

What party wasn't improved by dumping a bottle of wine into a bowl?

Then Add Your Vermouth

They don't give exact measurements, but in this case it looks to be about an ounce!

Mix In Some Pureed Strawberries

Is anyone else salivating at their computer screens? Once you have all the ingredients ready to go, you whisk them together in the bowl and then, if you have a massive slushie maker, dump it in. If you are, in fact, a regular human without a massive slushie maker, giving it a go with some ice in your blender! Then to make it extra 'gram-friendly, pop a strawberry on top.

Maybe just make sure you have a backup bottle of rosé juuuust in case. Or just get yourself down to Bar Primi to enjoy the magic right where it began. Out with the rose-colored glasses and in with the Frosé goggles, y'all.