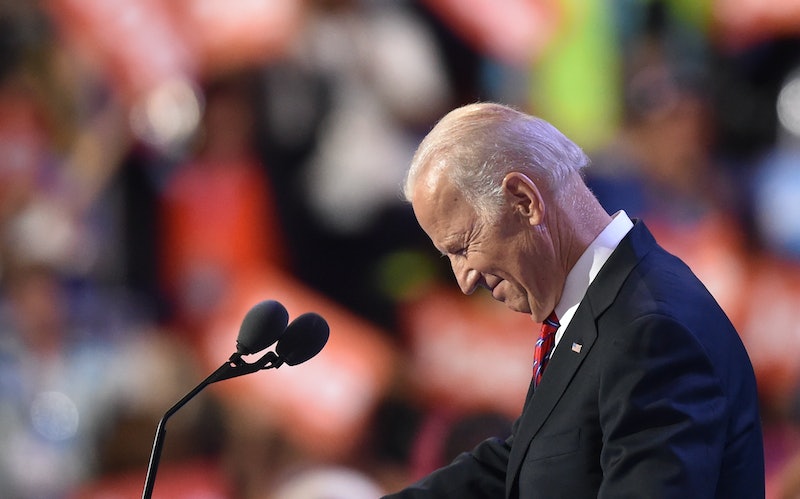 Back in October, Vice President Joe Biden announced that he would not be mounting a campaign for the Democratic presidential nomination. He and his family were grieving the death of his son Beau, but Biden always promised that he would not be silent on the subject of the election. He has stayed true to his word, slamming Republican nominee Donald Trump's foreign policy proposals and denouncing his bigotry. And on Wednesday night, Biden spoke at the Democratic National Convention to endorse Democratic nominee Hillary Clinton and her running mate, Virginia Sen. Tim Kaine, on the party's largest stage.

Biden told ABC's Robin Roberts earlier this year that if he had run, "I think I would have been the best president." But he also said he made the right decision for himself and for his family, and he has since tried to reassure voters that the Democratic Party isn't as divided as it may seem. Although he endorsed Clinton in June, Biden has attempted to maintain a relatively even hand throughout the primary season, applauding Vermont Sen. Bernie Sanders' efforts on issues like income inequality and reminding fellow Democrats that Sanders' delegates have worked hard to make it all the way to the convention floor.

You can read the full transcript of Biden's DNC speech below:

A journey, a journey that can only happen in America.

But we not only have worked together, as it becomes pretty obvious, we've become friends. We're now family.

We're family. Folks, you've all seen over the last eight years, what President Obama means to this country. He's the embodiment...

He is the embodiment of honor, resolve and character. One of the finest Presidents we have ever had.

This is a man of character.

And he's become a brother to Jill and me. And Michelle, I don't where you are kid, but you're incredible. You are incredible.

And I was talking to Barack today, it's no longer who's going to give the best speech, we already know who did that. You were incredible Monday night.

The Delaware delegation as they say in Southern Delaware...

Barack and I married way up. Way up. Folks, as I stand here tonight, I see so many friends and colleagues, like my buddy Chris Dodd and the Connecticut delegation. So many people are here. I see the faces of those who have placed their belief in Barack and me. So many faces, but one.

This is kind of a bittersweet moment for Jill and me and our family. In 2008, when he was about to deploy to Iraq and again in 2012, our son Beau introduced me to the country and placed my name in nomination.

His wife Hallie, and his two kids are here tonight.

And by all of you, and I mean this sincerely, those of you that have been through this, you know I mean what I say. By all of you, you're love, your prayers, your support, but you know what, we talk about, we think about the countless thousands of other people, who suffered so much more than we have, with so much less support.

So much less reason to go on. But they get up, every morning, everyday. They put one foot in front of the other. They keep going. That's the unbreakable spirit of the people of America. That's who we are.

That's who we are. Don't forget it. Like the people in the neighborhood that Jill and I grew up in. She in Willow Grove and mine down in Wilmington, and Claymont. The kid in Claymont with the most courage — always jumped in when you were double teamed or your back was against the wall, who became a cop, because he always wanted to help people. The middle daughter of three daughters, who always made her mother smile, who was a hero to her sisters. Now a major in the United States Marine Corps because Mr. President, I wanted to serve my country.

The teacher, the teachers who Jill knows, and so many of you know, who take money out of their own pockets to buy pencils and notebooks for the students who can't afford them.

Why? Why, because being a teacher is not what they do, it's who they are.

You know what I know, for real. These are the people who are the heart and soul of this country. It's the America that I know. The America that Hillary knows and Tim Kaine knows. You know, I've known Hillary for well over 30 years, before she was First Lady of the United States, when she became First Lady. We served in the United States Senate. And during her years of Secretary of State, once a week we had breakfast in my home, the Vice President's residence.

Hillary understands. Hillary gets it. Hillary understands that college loan is about a lot more than getting a qualified student education. It's about saving the mom and dad from the indignity of having to look at their talented child and say sonny, honey, I'm so sorry. The bank wouldn't lend me the money. I can't help you to get to school. I know that about Hillary.

Hillary understood that for years, millions of people went to bed staring at the ceiling, thinking oh my God what if I get breast cancer, or he has a heart attack. I will lose everything, what will we do then? I know about Hillary Clinton.

Ladies and gentlemen, we all understand what it will mean for our daughters and granddaughters, when Hillary Clinton walks into the Oval Office as President of the United States of America. It will change their lives.

My daughters and granddaughters can do anything, any son or grandson can do. And she will prove it, Mr. Mayor. So let me say as clearly I can, as I can, if you live in the neighborhoods like the one Jill and I grew up in. If you worry about your job and getting a decent pay, if you worry about your children's education, if you're taken care of an elderly parent. Then there's only one, only one person in this election who will help you.

Ladies and gentlemen, to state the obvious and I'm not trying to be a wise guy here. I really mean it. That's not Donald Trump's story. Just listen to me a second without booing or cheering. I mean this sincerely, we should really think about this. His cynicism is unbounded.

OK. But folks, let me, let me say, let me say something that has nothing to do with politics. Let me talk about something that I am deadly serious about. This is a complicated and uncertain world we live in. The threats are too great. The times are too uncertain, to elect Donald Trump as President of the United States, now let me finish. No major party, no major party nominee in the history of this nation has ever known less has been less prepared to deal with our national security.

We cannot elect a man who exploits are fears of ISIS and other terrorists. Who has no plan whatsoever to make us safer. A man who embraces the tactics of our enemies, torture, religious intolerance, you all know. All the Republicans know, that's not who we are. It betrays our values. It alienates those who we need in the fight against ISIS. Donald Trump, with all his rhetoric, would literally make us less safe. We cannot elect a man, who belittles are closest allies, why embracing dictators like Vladimir Putin. No, I mean that. A man who seeks to sow division in America for his own gain, and disorder around the world. A man who confuses bluster with strength. We simply cannot let that happen as Americans, period.

I have, no one every doubts I mean what I say. It's just that sometimes they say all that I mean. But folks, let me tell you what I literally tell every world leader I've met with and I've met them all. It's never, never, never been a good bet to bet against America.

We have the finest fighting force in the world. Not only...

Never. Ordinary people like us who do extraordinary things...

We've had candidates before attempted to get elected to appealing to our fears, but they never succeeded, because we do not scare easily. We never bow, we never bend, we never break when confronted with crisis. No, we endure, we overcome and we always, always, always move forward.

That's why, that's why I can say with absolute conviction, I am more optimistic about our chances today than when I was elected as a 29 year old kid to the Senate. The 21st century is going to be the American century.

Because we lead by not only by the example of our power, but by the power of our example. That is the history of the journey of America. And God willing, God willing, Hillary Clinton will write the next chapter in that journey. We are America, second to none. And we own the finish line. Don't forget it.

God bless you all and may God protect our troops. Come on. We're America. Thank you.

More like this
The Church Of Scotland Votes To Allow Same-Sex Marriages
By Sam Ramsden
How To Support Gun Control Reform Right Now
By Morgan Brinlee and Carolyn Steber
36 Influential AAPI Voices On Pride, Power, & Progress
By Faith Xue
Here's How To Practice Self-Love In Small Ways Every Day
By Mackenzie Sylvester
Get Even More From Bustle — Sign Up For The Newsletter