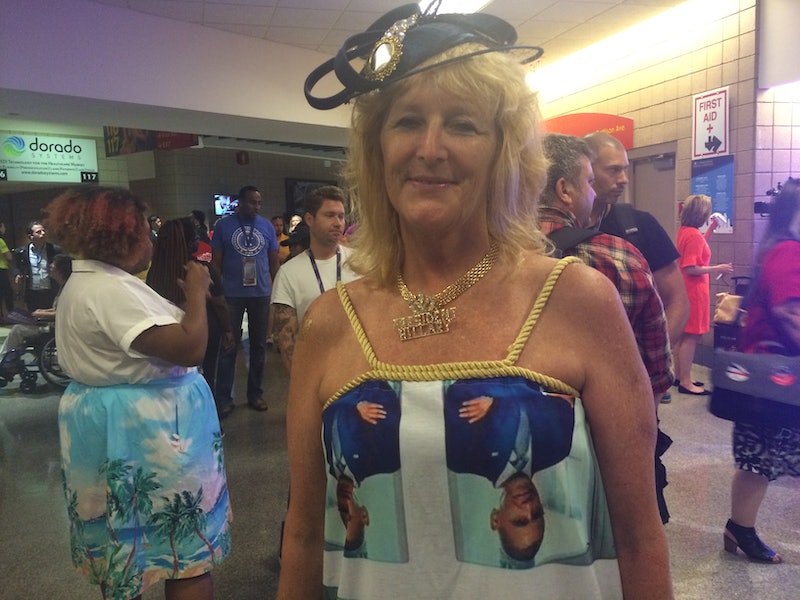 The Democratic National Convention has featured speeches from party leaders. It has been the target of protests. It has officially nominated the first female presidential candidate of a major political party. But what is the DNC like behind the scenes for the thousands of delegates who attend? Just ask Kelly Jacobs, a four-time DNC delegate from Mississippi who combines politics and fashion to design some creative convention outfits.

On Wednesday, Jacobs was wearing a dress with President Obama's face on it, as well as a pin that said "President Hillary" attached to a necklace. She supported then-Sen. Hillary Clinton during the 2008 election and cast her delegate vote for her at the convention, but she tells Bustle that once Obama won the nomination, she started wearing her "Obama-supportive gear because only one person can win the primary and then we support that candidate."

Jacobs tells Bustle that one of the first political dresses she made was a bunch of John Kerry campaign bags taped together and then worn over a dress. She then went on to design a "peace" dress with some Ole Miss Rebels representation on the back that she wore to her first-ever convention, and she wore a dress with Clinton's face on it to the 2008 DNC.

Politics and fashion are an interesting combination, but certainly not unusual. What was unusual for Jacobs personally, though, was the reactions she got from straight men to some of her dresses. "Straight men telling me that they liked the dress was just — is a continual provocation to me that they're paying attention to women's clothes!" she says to Bustle. "I just didn't get it."

But Jacobs made a point to clarify that although she enjoys designing these dresses, she doesn't sell any of her clothes. Instead, she wears them for her own enjoyment. "I am a political fashionista," Jacobs explains. "So I wear my dresses to the store so I can make those Republicans just suck it!" She is also being strategic when she wears these dresses, though. She informs Bustle that the people who like her dresses are the people she needs to "network with" in the red state of Mississippi.

As a political fashionista, Jacobs is also careful about wearing too much of her political gear at once. She has bracelets and earrings that celebrate Clinton, too, but she wants to stay fashionable so that people like her outfits as well as her candidate.

And Jacobs isn't just getting attention from fellow convention attendees. She told Bustle that she ran into someone who knew Pete Souza, the official White House photographer whose photos Jacobs artistically renders for her dresses. If Jacobs gets her way, Souza may just have to start making fabric out of his photos soon, so that other people who've enjoyed her dresses over the years can make their own.

Additional reporting and photos by Emily Shire and Alexi McCammond