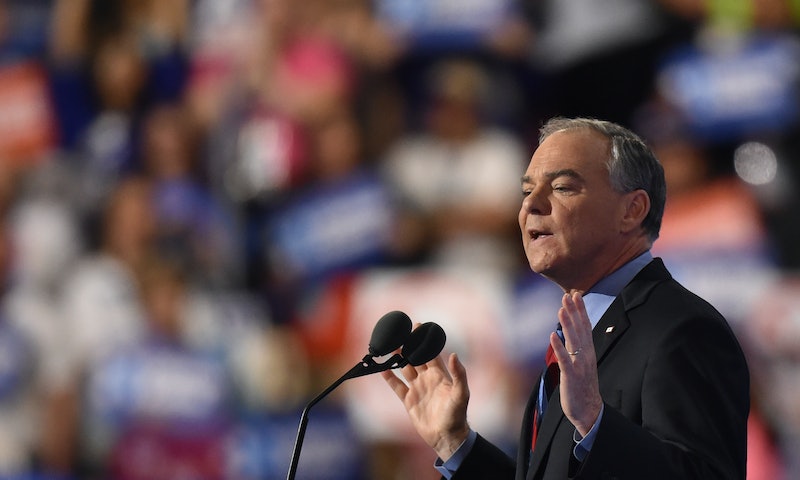 Ever since Democratic presidential nominee Hillary Clinton announced that Virginia Sen. Tim Kaine would be her running mate, one particular fact about him has been making headlines: He is fluent in Spanish because of his work with missionaries in Honduras. On Wednesday evening at the DNC, Kaine spoke Spanish in an attempt to connect with Latinx voters in America. But when it comes down to it, Kaine isn't representative of the Latinx population. Many other important Latinx perspectives were present at the convention, and they shouldn't be overlooked.

That's not to say for certain that every Latinx person at the DNC can speak Spanish. However, a lot of Latinx folks have already made it clear on social media that Clinton's picking a Spanish-speaking white man is not actually a substitute for picking a Latinx running mate. Huffington Post reporter Nelson Flores made an important point about this by directing attention toward another candidate on Clinton's VP shortlist: Julián Castro, Secretary of Housing and Urban Development. According to Politico, one Clinton insider pointed out that Kaine spoke better Spanish than Castro, even though Castro is Latinx and Kaine is not. Why does proficiency matter more than heritage? It seems like that's missing the point at hand.

Instead of giving all the attention to Kaine, the nation needs to remember that there was actual Latinx representation at the DNC. Celebrities America Ferrera, Eva Longoria, and Demi Lovato all spoke at the convention, while Karla Ortiz and Astrid Silva both spoke specifically about immigration. Rep. Luis Gutiérrez also took the stage, among others. And on Wednesday evening, 14-year-old mariachi singer Sebastien De La Cruz performed the national anthem. Let's take a look at some of their powerful quotes from the DNC about visibility, Latinx identity, and their lived experiences.

I am the proud child of Honduran immigrants. I am profoundly grateful for the access and opportunity that exists in this extraordinary nation. I was educated in public schools, my talents were nurtured through public arts programs, and you know what, occasionally I needed a free meal to get through the school day. Not everybody looks at the millions of young people like me — children born into struggling families, children born to immigrant parents, children who are immigrants themselves — not everybody looks at them and sees them as an investment.

I'm from a small town in South Texas, and if you know your history, Texas used to be part of Mexico. Now, I'm ninth-generation American. My family never crossed a border — the border crossed us. So when Donald Trump calls us criminals and rapists, he's insulting American families. My father is not a criminal or a rapist. In fact, he's a United States veteran.I want you to take a look at your convention, Philadelphia. A Latina from South Texas is introducing the first black senator from New Jersey on the week we'll nominate our first woman candidate for president of the United States! Pretty great. So guess what, Donald? It turns out America is pretty great already.

I’m scared that at any moment my mom and my dad will be forced to leave. And I wonder, 'What if I come home and find it empty?' I want my parents to see me do science experiments and find my rare rocks in the desert. I want to grow up to be a lawyer so I can help other families.

When I was four years old, my mother and I climbed into a raft, and we crossed the river to join my father in America in search of a better life. All I had was a little doll. ... My family believed so deeply in the promise of this country that we risked everything for the American dream. ... [My parents and I] live in constant fear that my parents could be taken away from their grandson, Noah. So when Donald Trump talks about deporting 11 million people, he’s talking about ripping families apart, separating families like mine and like Karla's.

No matter what others say, it is simply a fantasy that we’re going to round up and deport 11 million people. It’s a sick, hateful fantasy. But let me tell you what gives me hope: In her heart, Hillary Clinton’s dream for America is one where immigrants are allowed to come out of the shadows, get right with the law, and live without fear of their family being ripped apart.

So it's true that Kaine can speak Spanish. But let's not for a minute think that counts as Latinx representation, when there were so many powerful Latinx voices at the DNC this week.