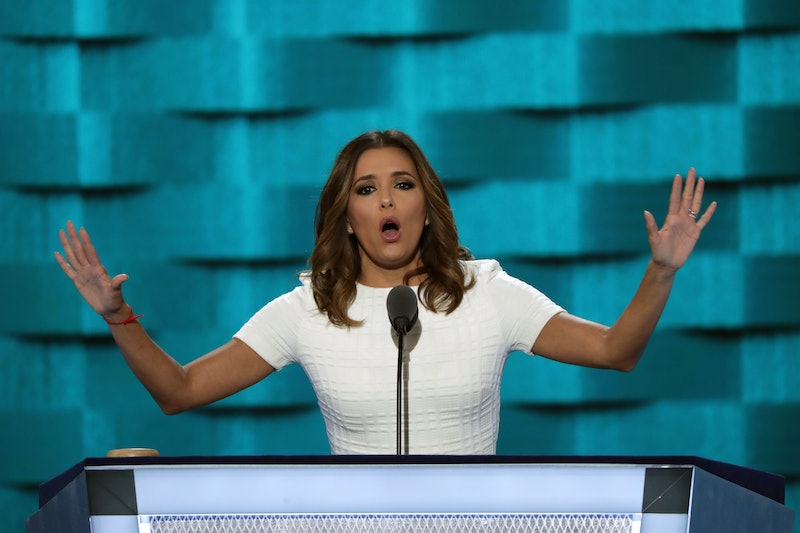 The Democratic National Convention kicked off on Monday in Philadelphia with a wide variety of speakers. From Elizabeth Warren and Bernie Sanders to Demi Lovato and Michelle Obama, the first day of the convention was all about calling for a united party that could successfully take down Donald Trump in November. Among these celebrity speakers' addresses, the transcript of Eva Longoria's DNC speech slammed Donald Trump for his remarks about minorities and women.

Longoria criticized Trump for his comments about Mexican immigrants, for mocking a New York Times reporter with a disability, and for making numerous sexist remarks throughout his campaign and career. She subsequently referred to Hillary Clinton as "the most qualified presidential candidate ever," and pointed out that even the convention alone was making history in terms of diversity. Longoria also repeated a call to action that she has delivered on a number of occasions on behalf of Clinton: "She's been fighting for us for decades and now it's time we fight for her."

Longoria joined several other celebrities at the DNC, which promised to be a star-studded four days. Others in attendance included Lovato — who also spoke on Monday — Lena Dunham, America Ferrera, and Chloë Grace Moretz, all of whom campaigned for Clinton.

You can read the full transcript of Longoria's speech below:

Hello Philadelphia! Oh man, I am so honored to be here tonight, and I am proud to say, I'm with her!

You know, like many of you, this election is very personal to me. I'm from a small town in South Texas and if you know your history, Texas used to be part of Mexico. Now, I'm 9th generation American. My family never crossed a border — the border crossed us. So when Donald Trump calls us criminals and rapists, he's insulting American families. My father is not a criminal or a rapist. In fact, he's a United States veteran.

When Trump cruelly mocked a disabled reporter, he was also mocking my special needs sister Lisa, and many like her. When he said that a wife who works is a very dangerous thing, he not only insulted me — he insulted my mother, who worked as a special education teacher for 30 years, raised four children while being a wife!

You know, I believe in the candidate who believes in all of us, and that candidate is Hillary Clinton. Hillary has spent her whole life fighting for all Americans, from healthcare reform to equal pay for women to gun safety to protecting the economy. She is the most qualified presidential candidate ever! She's been fighting for us for decades and now it's time we fight for her.

Now I'm very proud to be part of that fight, and I'm very proud to be here to introduce my dear friend Cory Booker, but before I do, I want you to take a look at your convention, Philadelphia. A Latina from South Texas is introducing the first black senator from New Jersey on the week we'll nominate our first woman candidate for president of the United States! Pretty great. So guess what, Donald? It turns out America is pretty great already. Ladies and gentlemen, please welcome Sen. Cory Booker.