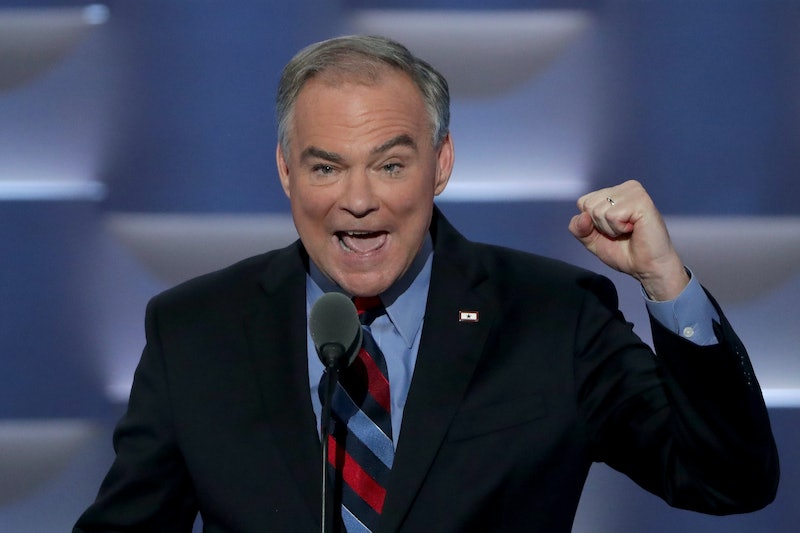 Donald Trump wasn't just the punching bag of this week's Democratic National Convention in Philadelphia — he was also the punchline. On Wednesday, vice presidential nominee Tim Kaine's DNC speech included a Trump impression, and let's just say it was "YUUUUGE"-ly successful with the crowd. Kaine's primetime speech wasn't just an opportunity for him to introduce himself to Democratic voters — it was also an opportunity for Kaine to introduce his version of Trump to the lively crowd.

"He's got a way of saying the same two words every time he makes his biggest, hugest promises," Kaine said. Those two words? "Believe me." Kaine wasn't the first speaker of the convention to criticize Trump in his speech, and he certainly won't be the last. But he was, perhaps, the most entertaining. The impression earned laughs from delegates across the audience — and former president Bill Clinton and daughter Chelsea Clinton.

Kaine's impression of Trump also offered the audience and viewers some comedic relief in the midst of a serious night. Speakers throughout the day and evening addressed the audience about tough issues like gun violence, national security, and climate change. Kaine's speech also touched on the serious issues that he and Clinton will stand for in the general election, but his impression of Trump surely made it stand out.

Aside from the impression, Kaine did, in fact, use his DNC speech to introduce himself to the voters paying attention. He identified himself as the father of a U.S. Marine, the son of small business owners, a senator with experience on the Armed Services and Foreign Relations Committee, and an advocate for his running mate, Hillary Clinton. As a fluent Spanish speaker, he delivered bits of his speech in the foreign language.

Then, it came time for the talk of Trump. "Trump is a guy who promises a lot," Kaine said. Enter impression.

Kaine didn't focus on the obvious Trump phrase, "Make America Great Again." Rather, he gave Americans a new Trumpian phrase to think about: "Believe me." Kaine certainly doesn't believe him — and his humorous impression on Wednesday night made a memorable case for why voters shouldn't believe him either.