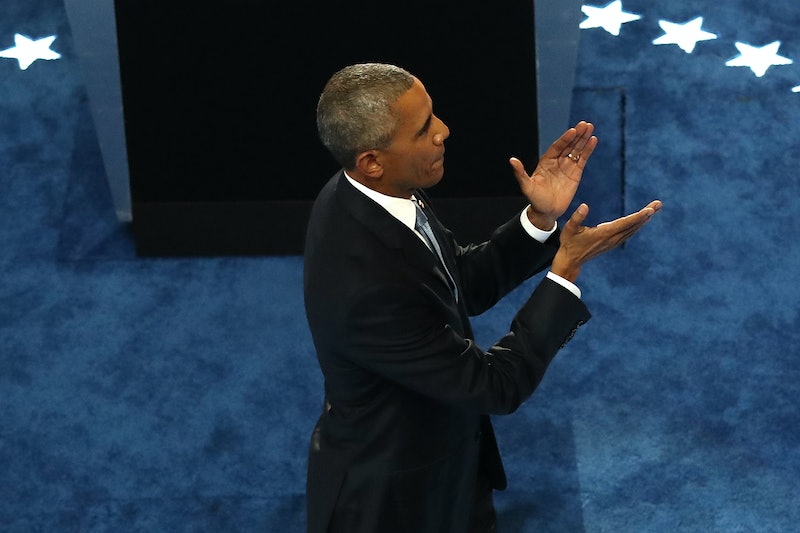 Eight years in the highest American public office has made President Obama quite the seasoned speaker — so seasoned, in fact, that he can work his favorite phrases into speeches as if they were written on the TelePrompter all along. Case in point: On Wednesday, Obama referenced Ginger Rogers in his speech to the Democratic National Convention, as he stood in support of his former opponent, Hillary Clinton. The ad-libbed reference seems to be an old favorite of the president's — but it will never, ever go out of style.

You've probably heard the saying before: Rogers did everything that her big-screen co-star Fred Astaire did, but she did it backward and in heels. It's a popular refrain for female empowerment, and, if you ask Obama, that's basically how his former secretary of state has had to run every presidential race she has entered. He has given Clinton that credit several times throughout her current presidential campaign, reminiscing about the time that they ran against each other in the Democratic primary in 2008. Although Obama came out victorious back then, he appeared to do everything he could on Wednesday night to make sure that Clinton has her moment in the White House, also.

Portions of POTUS' speech were released by the White House earlier in the day, but the Rogers reference was nowhere to be found — because it reportedly wasn't part of the script. It's a line that Obama is used to saying, though. In January, for instance, he gave an interview to POLITICO, in which he compared Clinton to Rogers, saying, for one, that Clinton had to wake up earlier than Obama in 2008 because she had to get her hair done.

Somewhat ironically, it's a comparison that Clinton may have actually made first. According to a 2008 report by Reuters, Clinton referenced Rogers and Astaire while campaigning for Obama at an event for Democratic women. After she conceded the primary race to Obama, she spoke about the differences between their campaign lifestyles, reportedly saying, "During the campaign ... Barack would get up faithfully every morning and go to the gym. I would get up and have my hair done ... It's one of those Ginger Rogers and Fred Astaire things."

Either way, Obama has popularized the reference during many of his remarks throughout Clinton's 2016 campaign. After he spoke on Wednesday, Clinton joined him on stage to celebrate all of the speeches made in her honor. She didn't actually have to walk backward, but she appeared to be rocking some heels.

More like this
What Is Barack Obama’s Net Worth? He Makes *Way* More Now As An Ex-President
By Hugh McIntyre
23 Abortion Funds In States With Trigger Bans To Donate To
By Emma Carey
Celebrities & President Biden Are Enraged By The Leaked Roe v. Wade Decision
By Alyssa Lapid
Dinner To Celebrate Diversity In Journalism Brings Out Media Leaders
By Brianna Kovan
Get Even More From Bustle — Sign Up For The Newsletter