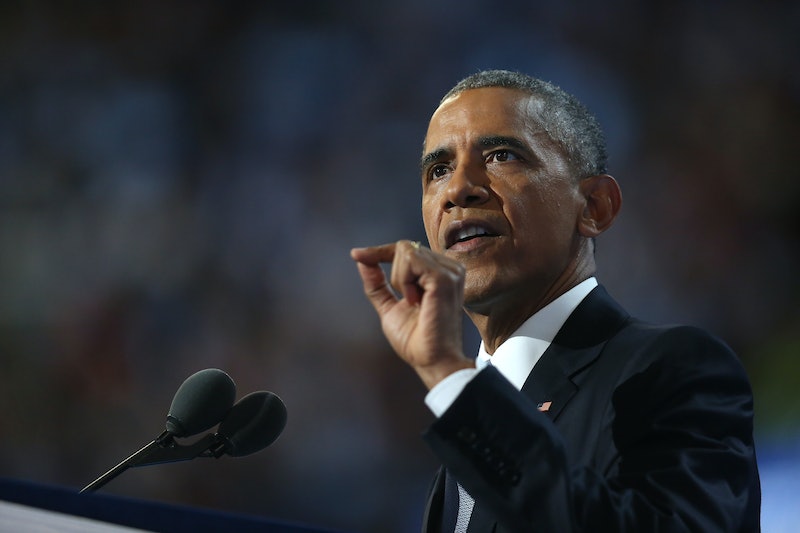 President Obama gave a whopper of a speech at the Democratic National Convention on Wednesday. In between praising Hillary Clinton, attacking Donald Trump and reminiscing about his own achievements as president, Obama said one thing in his speech that just about sums up this entire election. After mentioning Trump, the crowd started booing.

"Don't boo — vote." In those three words, Obama encapsulated quite a bit.

There's been a lot of booing, both literal and metaphorical, throughout this election cycle. Both of the major party presidential candidates candidates are very unpopular, though it should be noted that Clinton is far more popular than Trump, and that's led to a lot of disillusionment on both sides. In a situation like this, it can be tempting to simply opt-out of the political process and bemoan how awful things are.

"Don't boo, vote" is the counterargument to this. Because unless Americans actually exercise their ability to affect change in a productive manner — like voting — things won't change. They'll stay awful.

There's another sense in which Obama's line got to the heart of this election. Trump is a uniquely polarizing candidate: Those who already love him will follow him off of a cliff, while those who already despise him will never, ever be persuaded to vote for him. What that means is that 2016, in all likelihood, will be a turnout election, where the goal of both sides won't be as much to change minds but, rather, to make sure voters get to the polls on election day. Which, again, leads to one conclusion: Don't boo, vote.

The crowd devoured it, and it devoured the rest of Obama's speech, too. He continues to be unusually popular for a second-term president, and Clinton has already aligned herself closely with Obama throughout this campaign, and has pledged many times to solidify and perpetuate his legacy if elected. Given that Obama, too, would like to see his policies continued, you can bet your bottom dollar that you'll be seeing a lot more of him on the campaign trail between now and the election.