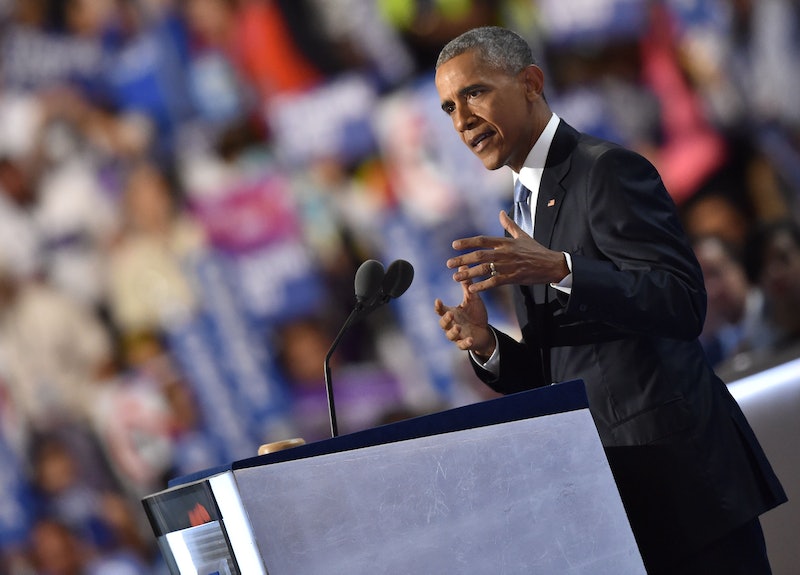 After a poignant, potent speech from our current president that instructed America in no unclear terms to vote for Hillary Clinton, the woman that Obama is proud to "pass the baton" onto, Hillary Clinton appeared on stage at the Democratic convention to surprise the crowd and embrace a tearful Obama. The Democratic presidential nominee didn't address the crowd, but embraced her once-primary opponent and now longtime friend and coworker, and joined him as he waved at the frantically cheering crowd.

Obama ended his speech with a plea for his supporters to vote for Clinton:

Time and again, you've picked me up. I hope, sometimes, I picked you up, too. Tonight, I ask you to do for Hillary Clinton what you did for me. I ask you to carry her the same way you carried me. Because you're who I was talking about twelve years ago, when I talked about hope – it's been you who've fueled my dogged faith in our future, even when the odds are great; even when the road is long. Hope in the face of difficulty; hope in the face of uncertainty; the audacity of hope!

America, you have vindicated that hope these past eight years. And now I'm ready to pass the baton and do my part as a private citizen. This year, in this election, I'm asking you to join me — to reject cynicism, reject fear, to summon what's best in us; to elect Hillary Clinton as the next President of the United States, and show the world we still believe in the promise of this great nation.

The president had just wrapped up the speech that may well be his Democratic convention swan song (as the current president, anyway).

As the crowd held up signs that read, "Thank you," alluding to Obama's eight years of service as president, Obama waved and smiled at the crowd.

Clinton had landed in Philadelphia earlier Wednesday, but was not expected to speak or appear at the convention until Thursday, as is custom for a party's nominee.

If you squint, it's kind of like they're stand in a Pokéball.

Are you crying yet?

By now, you gotta be.