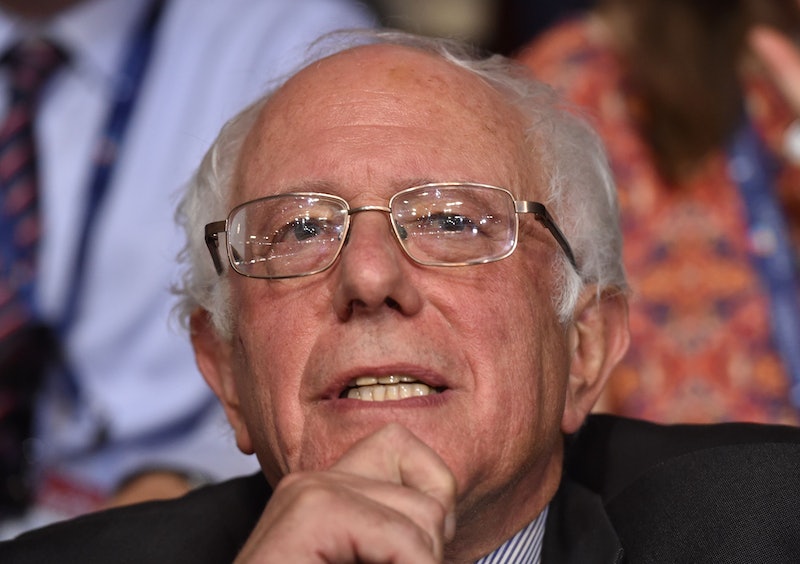 As one of Wednesday's keynote speakers at the Democratic National Convention, President Barack Obama gave Hillary Clinton a mighty endorsement. But that doesn't mean he let Bernie Sanders' movement slip out of the spotlight. As the camera caught a glimpse of Sanders reacting to Obama's "Feel the Bern" comment, the Vermont senator's humbled pride shone brightly. Refusing to react too enthusiastically, Sanders looked as though he was trying his absolute hardest to suppress a huge smile. Though the democratic socialist may not be thrilled about losing out on the party's nomination, he's certainly proud of how far his supporters have helped his movement come.

During his speech, Obama gave a shout-out to Sanders supporters, some of whom have refused support Clinton, even though the Vermont senator asked his delegates to vote for her earlier in the week. In response to the discord, the president invited Sanders backers to bring their never-give-up attitudes to Clinton's campaign:

So if you agree that there's too much inequality in our economy and too much money in our politics, we all need to be as vocal and as organized and as persistent as Bernie Sanders voters have been during this election. We all need to get out and vote for democrats up and down the ticket and then hold them accountable until they get the job done.

In his own speech on Monday, Sanders publicly accepted the fact that he lost the primary, saying that although he wasn't happy about it, he hopes that his supporters will unite under Clinton. Addressing the "Bernie or Bust" backers, he emphasized strength in numbers. In other words, unity must be achieved before true change is enforced. Still, he was careful not to discourage his fans, who will prove vital in efforts to make the Democratic party platform more progressive:

I understand that many people here in this convention hall and around the country are disappointed about the final results of the nominating process. I think it's fair to say that no one is more disappointed than I am. But to all of our supporters here and around the country, I hope you take enormous pride in the historical accomplishment we have achieved. Together, together, my friends, we have begun a political revolution to transform America, and that revolution, our revolution, continues!

Obama made an attempt to redirect that revolution's energy toward Clinton. "That's right, feel the Bern!" he exclaimed as people cheered. It's difficult to tell whether Sanders was more pleased by Obama's comment or disappointed by his waning revolution. Either way, he was respectfully reserved, giving all of his attention to the president.

And if the Democratic Party is going to be successful in beating Donald Trump come November, it will have to make a major appeal to Sanders' diehard supporters, who aren't pleased with Clinton's political platform. Obama's effort, along with that of Tim Kaine and Michael Bloomberg, show just how important that task is during these divisive times.