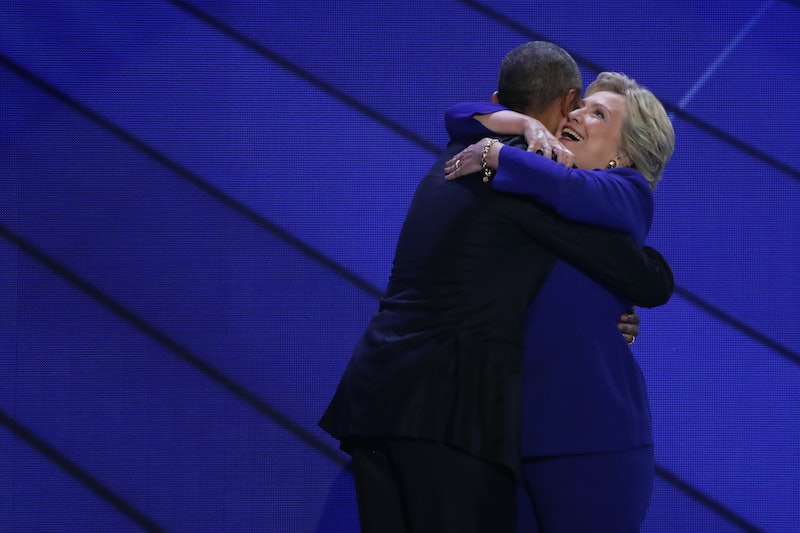 The Democratic National Convention reached a new emotional high Wednesday night when Pres. Obama passed the torch to Hillary Clinton and hugged the new Democratic nominee. The crowd — and certainly millions of Dems watching at home — approved. But one guy didn't. The Republican presidential nominee — Clinton's greatest enemy at the moment — tried to ruin the good will and hope with some typical "sad" rhetoric. But sorry, Donald Trump, you're not bringing down Democrats tonight.

Trump was probably a bit incensed by Obama's speech. Sure, Obama praised Trump's least favorite Dem, Clinton: "She’s been there for us — even if we haven’t always noticed," the President told the crowd. And he acknowledged the achievements of his eight years in office — job creation, expansion of health care access, and new overtures of diplomacy with Cuba and Iran. But for the bulk of his speech, he attacked Trump and the Republicans. And we all know that Trump doesn't take criticism well. For example, Obama said this about Trump:

He’s not really a plans guy. Not really a facts guy, either. He calls himself a business guy, which is true, but I have to say, I know plenty of businessmen and women who’ve achieved success without leaving a trail of lawsuits, and unpaid workers, and people feeling like they got cheated.

Add that little insult to the bigger argument Obama made, and Trump was surely livid. The president pointed out that Trump and the Republicans have no plan to improve the United States. They only offer up fear, calling the United States "a divided crime scene" that only they can "vaguely" fix through "law and order," Obama explained.

What we heard in Cleveland last week wasn’t particularly Republican – and it sure wasn’t conservative. What we heard was a deeply pessimistic vision of a country where we turn against each other, and turn away from the rest of the world. There were no serious solutions to pressing problems – just the fanning of resentment, and blame, and anger, and hate.

Trump responded twice: one time on Twitter and once through an adviser. Both are classic Trump and it would be sad if it weren't so predictable. He turned the Democrats' argument right back on them in the vein of "I know you are but what am I?" from the elementary school playground. Here's what his Policy Adviser Stephen Miller told the press Wednesday night:

Tonight was a sad night for the Democratic Party. They offered no solutions for the problems facing America — in fact, they pretended those problems didn't even exist. They described a vision of America that doesn't exist for most Americans, including the seventy percent of Americans who think our country is on the wrong track. Never has a party been so disconnected from what is happening in the world.

Déjà vu, right? It's kind of like Trump and his team think they can "Melania" the rest of the election, taking talking points from Obama and the Democrats and turning them around on Clinton. Luckily, no one is falling for it. Obama's speech was the perfect response to the dire picture Trump painted of the United States in his RNC speech.

When you consider the two views of America — one hopeful and focused, the other pessimistic and all over the place — it becomes clear that one is significantly more positive. And thanks to Trump's unoriginal attacks, it should be pretty easy for the Democrats to maintain that positivity.