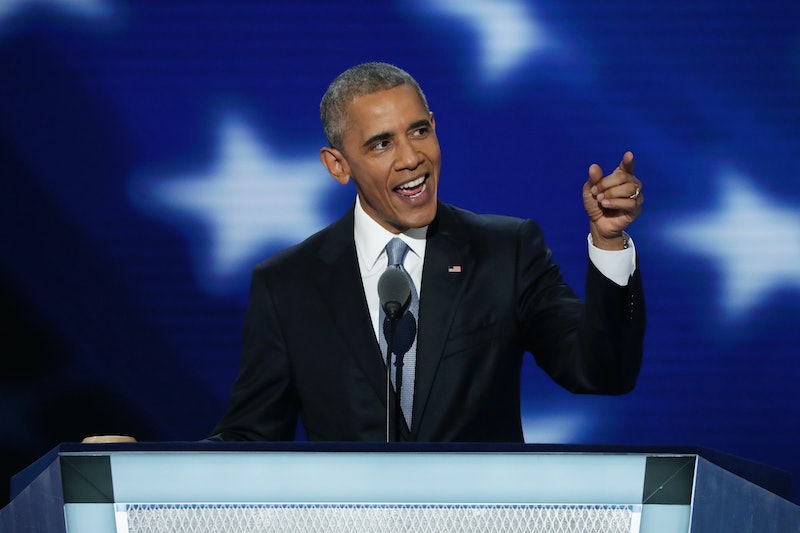 Last night, Barack Obama gave one of the most memorable speeches of his political career. His purpose was threefold: He laid out his legacy, he passed the baton to Hillary Clinton, and he slammed Donald Trump as a "homegrown demagogue" to whom we cannot entrust American democracy. On every count, he slayed. Delegates in the audience screamed out, "Four more years!" and the folks on Twitter noticed, too. These Obama DNC speech memes are so good that they make you wish he'd stick around just a little longer.

So here's why the speech was so good: Obama owned his legacy and pointed to the huge strides made in the United States since his inauguration in January of 2009. "I stand before you again tonight, after almost two terms as your president, to tell you I am even more optimistic about the future of America," he said to the crowd. Why? Because of "all we've achieved together."

"After a century of trying, we declared that health care in America is not a privilege for a few, but a right for everybody," he told the cheering convention hall. He also referenced new jobs and clean energy. On top of that, there's winding down the wars, killing Osama bin Laden, and expanding diplomacy through the nuclear deal with Iran. Not to mention student loan reform, a decrease in homelessness among veterans, and marriage equality.

Sounds pretty good, right? Obama then went on to show why Clinton is the one to carry his projects forward. Because there's still more work to be done. "We’re not done perfecting our union, or living up to our founding creed – that all of us are created equal and free in the eyes of God," he said.

There is only one candidate in this race who believes in that future, and has devoted her life to it; a mother and grandmother who’d do anything to help our children thrive; a leader with real plans to break down barriers, blast through glass ceilings, and widen the circle of opportunity to every single American – the next president of the United States, Hillary Clinton.

Sounds like Obama's sold. He called her the most qualified man or woman to ever run for the office. The only stronger element to his speech was his takedown of Trump. Summed up, it would be, "Don't boo, vote!" But you really ought to listen to it. He not only took down Trump, but also explained why Trump's worldview doesn't mesh with America. "Hope in the face of difficulty," is the American path forward.

And there's still plenty of hope, if Twitter is to be believed. Hope and early-onset nostalgia for the best president in most of our lifetimes.

But seriously. He's the greatest, so don't even.

There were shareable takeaways.

'Cause he was really on fire.

It makes you want to get up and cheer him on.

Because you are just so enamored. And he loves you back. You heard that, right?

And only an Obama speech could have this effect.

Because Hillary is the political Ginger Rogers.

So you're voting for her. No matter what.

Now, not everybody was on board with his message.

But there's hope they can be convinced.

Overall, this was the most relatable reaction:

Although there may be some hope.

And if you're reading this in the early hours of the morning, you're not alone.

This may not be Obama's last speech — we can hope. But it sure was an epic one.

More like this
How The City Healed Five Years On From The Manchester Arena Attack
By Ella Glover
10 Times Diana & Meghan Spoke Similarly On The Royal Family
By Sophie McEvoy
Twitter Can’t Get Enough Of The WAGatha Christie Trial
By Nola Ojomu
The Viral TikTok “30,000” Sound Fits Nearly Every Scenario
By Courtney Young
Get Even More From Bustle — Sign Up For The Newsletter