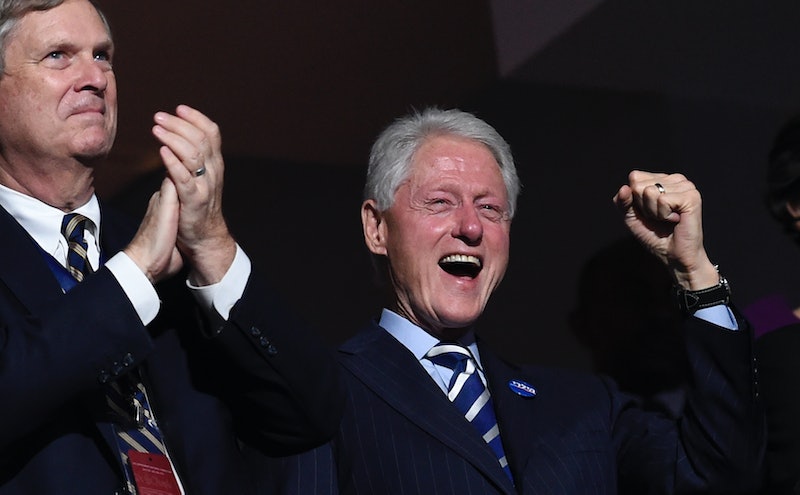 As far as endorsements go, it probably doesn't get much better than this. President Obama gave what some are calling one of the greatest speeches of his presidency at the Democratic National Convention Wednesday night. In it, he said that no one — not even himself or Bill Clinton — has been more qualified to be president than Hillary Clinton. And judging from Bill Clinton's absolutely adorable reaction, he seemed to wholeheartedly agree with Obama's sentiment.

In his speech, Obama outlined the many ways Clinton is qualified to succeed him as president — and indeed, the ways in which she is actually more qualified than Obama himself. But what's funny is that if you read his remarks as they were originally prepared for delivery, he doesn't call himself or Bill out in the speech. Which means that the known, cool swagger he used to tell the American public that Clinton is more qualified was likely ad-libbed.

His reasons behind the endorsement are plentiful. Obama believes that Clinton is ready to take on the tasks of the Oval Office because she's been there before, both as first lady and secretary of state. She's gotten firsthand experience facing the many challenges brought to the president's desk, working alongside Obama as they made decisions regarding global crises and war. This position, Obama clarifies, is why she is uniquely capable of succeeding him as president:

...No matter how daunting the odds, no matter how much people try to knock her down, she never, ever quits. That is the Hillary I know. That’s the Hillary I’ve come to admire. And that’s why I can say with confidence there has never been a man or a woman — not me, not Bill, nobody — more qualified than Hillary Clinton to serve as president of the United States of America.

He followed that endorsement up with this golden line: "I hope you don't mind, Bill, but I was just telling the truth, man."

"I love that," Bill can be seen saying from the audience. As he should — in his own speech the night before, he called his wife "the best darn change-maker I have ever met in my entire life."

Based on Obama's judgement of Clinton's qualifications, Americans would certainly be lucky to have the former secretary of state as president. America made great strides under the Clinton and Obama administrations, and it's obvious that both the president and Bill feel that Hillary is the best person to continue making those gains.