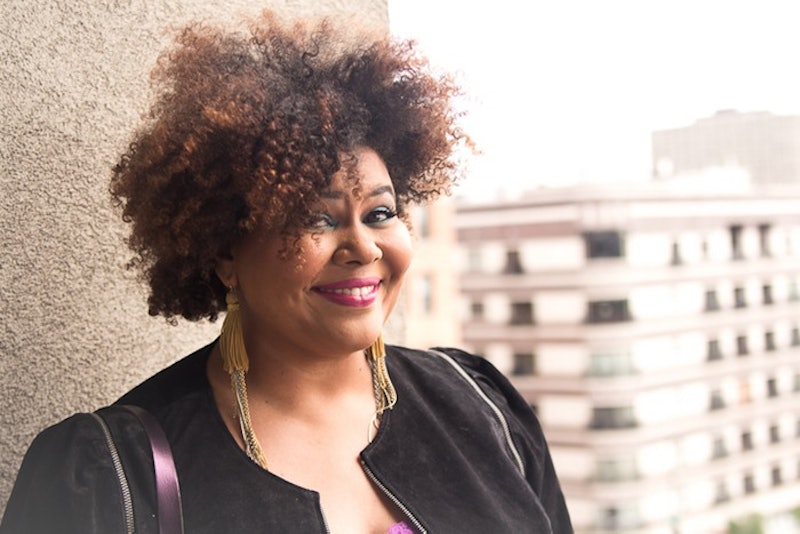 Whether you were 11 or 27, almost everyone remembers the reason why they first started shaving. Granted, it was not always a pretty experience (and more often than not, it was one filled with little paper squares that covered nicks), but first shave stories are often fond memories. They can be hilarious and rife with growing pains. But while those kinds of recollections might offer a good chuckle, it's also interesting to think back onto why many of us felt the need to pick up a razor in the first place.

Although there are still plenty of women and feminine people who don't feel the need to go smooth and hairless (and more power to them), many girls as young as 11 feel pressured to get rid of their fuzzy baby hairs, whether on their legs, pits, or faces. So, what's the real reason for that?

Well, most of us are taught from a young age that there's a certain way that a "proper" woman looks, and that woman is oftentimes as smooth as a hairless cat. So, in an effort to relive cringe-y adolescent memories, funny (and painful) first moments yielding a razor, and interesting (and telling) reasons as to why those one-bladers were gathered up in the first place, below are 11 first time shaving stories collected via email and social media.

The first time I realized I couldn't keep going au naturale was when I was in my freshman year of high school. One day during algebra, I noticed that the cool girls behind me where snickering and doing that flippy hair thing that popular girls always seem to do, when a pencil rolled underneath my desk.

I picked it up and handed it back to them, which only made them giggle harder. About 30 seconds later, another pencil rolled underneath my desk... and this went on about three more times until I realized why they were doing it.

It was to get a closer inspection of my peach fuzz legs, which they thought were hilarious and gross with a capital "G." Mortified (and wanting to snap that stupid pencil in half), I vowed to pick up a Lady Schick right after school.

For fashion blogger Nikki Frenney of Nikki FreeStyle, shaving was a "man's thing" — she never thought she'd have to pick up a razor herself. Frenney tells me, "I vividly remember as a child the smell of my grandfather's and my father's shaving cream. It was the worst smell in America to a 9-year-old. But it was a regular ritual with both, and I just naturally associated the smell with men and facial hair removal. Not something that this sassy little spitfire of a girl would ever have to worry about."

If only we were so lucky. But then came puberty.

Frenney continues, "Fast forward some 25 years later and I'm contemplating my entire life's purpose because I've discovered the loneliest, longest, toughest, and most stubborn single strand of hair growing from my chin. And trying to pull this little sucker out was like a WWE match. Each time I had the Strain Of Hell on the mat, in a choke-hold no doubt, it just wouldn't tap out."

Distressed, Frenney went to an aesthetician who plucked it out for her and assured her that it wasn't the first step in becoming a modern-day Chewbacca. But, "Every time it grows back... I'm in constant prayer that each time if does, it doesn't bring any of its friends along to the party."

When it came to Amber McCulloch — blogger at Style Plus Curves — all her friends started shaving by the fifth grade, but her mom had a house rule whereby she and her sisters weren't allowed to shave until they were 15.

McCulloch reminisces, "It seemed like a rite of passage that I was being denied, and I kept begging my mom to let me start. What made it worse was that my hair wasn't the golden, soft, and barely-there hair of my schoolmates... it was dark and coarse and showed up dramatically against my super white, untanned skin." With all the girls showing up to gym class smooth, her sisters' pink Daisy razor was calling her name from the bathtub.

And she answered the siren's song. McCulloch shares, "One day — I was only 12 — I picked one of my sisters' razors and — feeling so empowered and rebellious — started shaving. I was feeling very smug — right up until I gouged a two inch swath of skin off of my shin bone and started bleeding profusely all over the bathroom." Talk about a traumatic experience.

When style blogger Stacey from Hantise De L'oubli was 15, she didn't really care about her body hair — that is, until she heard a comment about her leg fuzz. Stacey remembers, "I was sitting with a few friends and one mentioned how she thought leg hair was disgusting and that body hair on women had to be maintained. I was feeling so self-conscious that I actually went home the same day and used my aunt's razor to partially shave off my legs. I had no clue what I was doing and I left gashes on both legs that scarred in the worst possible way!"

It seems like almost everyone had a rough time with that first shave — ouch.

Patrice Grell Yursik from Afrobella didn't get body hair until she was 12, since she always had lighter leg hair. But the first time she did pick up a razor was for her armpits. Yursik remembers, "I used my dad's razor and lots of soap. I was terrified I'd cut myself so I was really careful. No nicks or cuts. I stole my dad's shaving foam for my legs and armpits early in my shaving life, until one day he realized how dull his razor was!"

Looks like she got busted, but at least she got away with it for months. Though it's interesting that someone as young as 12 could feel self-conscious about their wispy hairs.

As for style blogger Chastity Garner-Valentine of Garner Style, she didn't really need to shave her legs — she simply wanted to. Garner-Valentine explains, "I was in fifth grade when I felt the need to shave my legs, and honestly it was me wanting to be grown-up like my older sister and mom. I didn't need a reason for this ritual; I just knew that they did it and I wanted to be like them."

Are you all aww-ing right now?

Style blogger Chantal Sarkisian from Mode XLusive affectionately describes herself as a "fuzzy person," but the first time that she discovered she needed to pick up the razor wasn't such a warmhearted moment.

She shares, "The first time I realized I had to remove my peach fuzz around my side burns was in grade nine, when I was in army cadets (and I'm not sure which is more embarrassing — being in army cadets or the fuzz). We had an inspection before the parade, and my arrogant drill sergeant was like, 'Hey, if we guys have to shave, why don't you have to?'"

Feeling like the ground opened up around her, she started to wax her face. But real talk: Whether you decide to wax or shave is up to you, but there's no need to ever shame somebody into it.

When style blogger Ragini Nag Rao from A Curious Fancy was in sixth grade, she really wanted to thread her eyebrows. Her parents weren't into the idea, though, so she decided to go renegade and do them herself. The only problem with this situation was that she used... a razor. Yup, you can see where this is going.

She shaved off half of her brows while trying to "shape" them.

She remembers, "I spent the next month drawing them on with a marker as they were growing back. These days, I have no I idea why I ever felt the need to do anything to my eyebrows. I haven't plucked a single hair out of them in the past four years, and they look absolutely fine to me!" Preach it, girl.

For Paula, her "oh no" moment came during gym class in junior high. She didn't realize that girls had started to tackled their leg hair until she heard a particularly mean one talk about it in the locker room.

Paula thinks back, "She always made comments about all the other fuzzy girls during class, so I always tried to hide my legs from her — finally, I was over the stress and just caved and shaved." It's always a rough day when bullies win.

Julia was in grade school and visiting family in Poland when the topic of shaving first came up. She was swimming around with her cousin when she made a blunt observation. Julia grimaces, "I was playing around in the water when my cousin stops, looks at my pits, and says, 'I think you need to start shaving — I'm older than you and mine aren't even that hairy.' I picked up a razor that day."

I know that most families usually drop truth bombs like they're no big deal — but, oh dear.

For Paulina, she wasn't really shamed into shaving. Rather, her first tango with wax strips came because of sports. She recounts, "I was on the swim team sophomore year of high school and you basically had to shave in order to cut down on lap times. So for me it wasn't such a bad moment because I didn't feel embarrassed over my body hair — I just wanted to be a better athlete."

Getting smooth for a win is a much better experience than being harassed by societal beauty standards.

In the end, that's what we should remember: Whether you like being baby smooth or love to embrace your fuzz, try to do it for yourself. Don't do it because some outside decree told you that that was what a woman should do. Just do what makes you happiest.