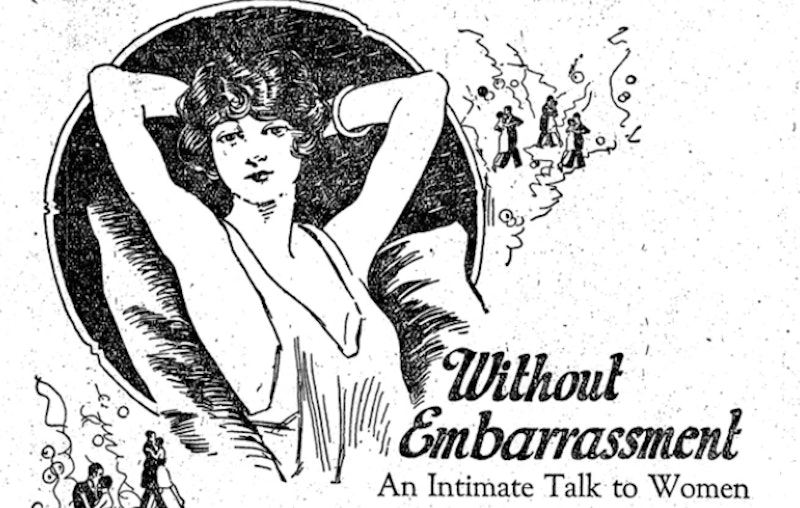 When stuck in the shower — smeared head to toe in foaming gel — do you ever wonder why exactly you spend so much time shaving? Why do you get rid of your armpit tufts, wax off your leg hairs, and clean up your bikini line? The history of hair removal can give us an insight into that, and a great way to study it is by looking at hair removal ads that spanned the 20th century.

Ads often rely on the emotions of their consumers to sell their ideas, and they pull on strings attached to fear, love, and vanity to create problems that you previously didn't know you had. But once the seed is planted, you'll be hard-pressed not to want to fix it. That's exactly what happened with the dawn of the lady razor: Once Victorian dresses were shrunken down to the size of flapper ones, a lot more seemingly-innocent hair was exposed. And with that, an idea of a new problem arose.

Even though the notion that women and feminine people don't have to shave should they not want to is getting some mainstream traction in 2016, it's taken us over a century to get back to this point. Below are 100 years of shaving ads, and how they manipulated us into going hairless.

When Gillette made its first women's razor in 1915, it invented a problem a lot of women didn't know they had: Pesky hairs that were now unseemly. The reason for it? In the Victorian era, women were buttoned up and draped up to the chin, but once fashions became more lax and more skin was shown in public (think sleeveless flapper dresses) marketers had new vulnerabilities to exploit. With all this new bare skin, there was money to be made.

This can be seen with the copy's line, "Milday Decollete Gillette is welcomed by women everywhere — now that a feature of good dressing and good grooming is to keep the underarm white and smooth."

The key phrase here is arguably "by women everywhere." You wouldn't want to be the only hairy one in the dance hall, would you? Can you imagine seeing this in a newspaper and contemplating going out to the speakeasies with tufts of hair coming out from underneath your sleeveless dress? Mortifying. The seed was planted.

Up until very recently, women's magazines were seen as the only little bibles that could help us figure out the newest fashions, the ever-changing definition of what it means to be "feminine," and how to properly behave in polite society. So when women's magazines began running hair removal ads, it struck a stronger chord with the people reading.

Run in Harper's Bazaar in 1922, this body hair removal ad appeals to two desires: Protecting yourself from embarrassment, and staying on trend. With the rise of sheer stockings, raised hems, and sleeveless styles, this ad urges women to save themselves from the incredulous stares of dinner guests by getting rid of their body hair. And if they do, well, they'll keep on looking stylish and appear as though they're "in the know" of the moment's trends. What a total win.

Regarding the era, Jennifer Scanlon, professor of gender and women's studies at Bowdoin College, shared with Chicago Tribune, "You see this kind of transformation of the female body — that women are increasingly to be looked at. There's sort of the promise that more and more women can gain access to beauty if they engage in these practices (like) shaving their armpits." Breaking further away from the Victorian ideals of covering up and acting like prudent, hidden women, females seemingly felt a bigger need to appear as "beautiful" as possible in public.

And then other times you just had ads that straight-up tried to terrify you. This 1930s one preyed on a the fear of being unloved and single, calling body hair the source of ugliness and lonely misery. If a woman just got rid of her body hair, she'd finally be able to be happy (see: she'd attract a guy, rather than being ripped apart by him from across a restaurant).

According to VOX Media, it took a long time for women to buy into the "need" for shaving their legs. Armpits yes. But legs, not so much. Hem lines dropped back down after the '20s, and even if a woman chose to wear a flirtier, shorter skirt, she could always slip on a pair of stockings and hide her leg fuzz.

But then the Second World War hit, and as companies refocused their attentions on helping produce war materials, there was a nylon shortage. According to Elle, "Due to a wartime shortage of nylon, more products and techniques for hair removal hit the market as women were forced to go bare legged more often."

And just in case a lucky woman still had an old pair of stockings that didn't get snagged or traced with runs, the ad covered its bases, stating, "Your legs — beneath those new stockings — take on a completely new glamour and allure."

We were on our way to a hairless body, tights or no tights.

Now that shaving was widely accepted as just another female ritual you had to do before bed to stay beautiful, advertisers could ease back on the public shaming tactics and instead focus on trying to differentiate themselves from the competition.

Enter ads like this one, where the product design tried to appeal to a woman's vanity and not her fears. Featuring a debutante dressed up in red lipstick and dripping with diamonds, the woman reading this is made to feel like she can only portray such class and femininity if she is hairless. Thinking of what the opposite of "class" and "feminine" might be, it's easy to see why a woman in the 1950s could easily feel the need to pick up one of these products.

As suggested by the above as, the '60s seemingly saw advertisements revert back to shaming tendencies, poking fun of those who still hadn't jumped on the bandwagon. Keep in mind this was the age of second-wave feminists and free-loving, hairy hippies, so companies had to work a little harder to get this generation of women to bite.

For example, this one in particular took a different belittling direction, where it wasn't making fun of a woman for being hairy, but rather for being scared to handle a razor like a man would. Enter the "Scaredy Kit," a pink and sweetly feminine kit designed to put a woman at ease when handling a razor in a bathtub.

Once you read the copy, you realize what they're trying to do is egg a woman on until she folds. With condescending lines like, "When a boy starts shaving, he becomes a man. When a girl starts shaving, she becomes a nervous wreck," "stop shaking. Sharp blades give you the best shave," or "the razor has a longer handle. (To get a better grip on yourself while you shave)," the ad challenges a woman to rise up the bait and prove she's not scared.

With the '70s comes shorter skirts, shorter tops, and teeny tinier bikini bottoms... which meant you had a heck of a lot more to worry about when it came to shaving. At this point, you practically needed to tackle your whole body with shaving cream when entering the shower, so you needed a bigger razor, and one that moved fast. Enter the Lady Norelco, the razor that could make you hairless 40 to 50 percent faster than any other blade. At this point, being hairless had become the norm, so ads didn't feel the need to teach their consumers what looked good and what didn't.

Reverting back to 1930s themes, the '80s were seemingly about making your body as attractive for a man as possible. It was the age of membership gyms, bolted on boobs, and glamorous, gaudy fashion, and that was all there to help you polish yourself up for the opposite sex. Which you can see with Gillette's "Just Whistle" campaign, the copy reading, "If you want to get somebody's attention, Just Whistle." If that wasn't obvious enough, the ad shows a man's shadow falling across the woman, signaling that her legs have caught his attention. That's all a woman could ever want.

Now when we think of shaving, a lot of the focus veers toward sex. If you don't have a date, you don't shave. If you're single during the winter, you can get away with being Chewbacca until spring. If the spark runs out of your relationship, you go to bed with hairy legs.

And if you do have the chance of inviting someone back to your place, you need to take care of the grooming situation beforehand. Enter ads like this Schick one, where three women can trim their bikini line into any shape they want with the help of an electric razor.

Whether shaving ads preyed on the fears of a woman ending up being unloved, pulling a fashion faux pas, not measuring up to a higher caliber, or not coming across as sexually appealing, one thing is for certain: Ads create problems we didn't know we had. Whether it was in the 1920s when women discovered their armpit hair was ghastly, the 1960s when not using a razor meant you couldn't handle yourself like a man, or the earlier 2000s when you couldn't be sexually attractive if your bikini line wasn't presented in the shape of a thunderbolt, ads make the problems we need to work to fix through their products.

Now the question is: Are we strong enough not to buy into them?