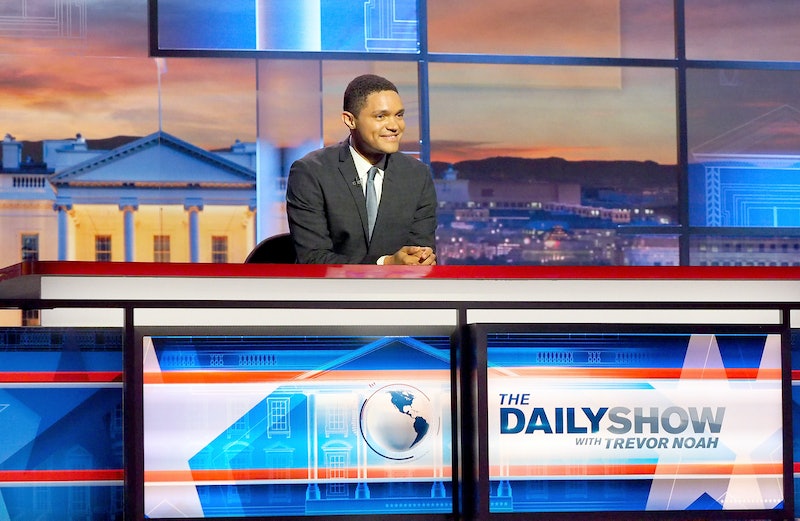 In theory, there are two choices for U.S. president this November, but Trevor Noah calls it like he sees it: There's just one. Noah has been looking at the nominees through a critical comedic lens since they announced their candidacies, and now he's finally ready to break it down for the viewers at home. "When you look at the two candidates side by side, it’s embarrassing that this even a contest," he said on Wednesday night's episode of The Daily Show. No, as you might have guessed, he's not supporting Trump. Noah's take on the DNC was remarkably refreshing and honest.

To make his point, Noah decided to compare metaphorical lifeboats. It's pretty clear which one he'd jump into. There's the Hillary raft, which "we’ve seen float, it’s weathered many a storm, and yes, it’s sprung a few leaks, metaphorically speaking." The other, the Trump boat, "is made out of cheese doodles, and it has a shark in it, and it’s on fire, and it’s underwater, and its name is Donald Trump, and somehow it’s leading in the polls, people!”

Noah also has a response for those who think he should stay impartial: "I know, I know people are going to try and say, 'It's all 'bout objectivity.' Yes, and any objective person can see that of the two options, one is not an option."

To rest his case, Noah said that we should look at the candidates as person one vs. person two — not with political parties or endorsements clouding our judgment. Then he played tapes of what has been said about Trump and Clinton at their respective conventions. Clinton has helped people time and again, and Trump is a "first-class" real estate tycoon. She brokered a Middle East ceasefire; he built a golf course over a landfill.

But that wasn't his only proof on Trump for anyone still wavering about whom to vote for. Covering Trump's call for Russia to hack Hillary's emails, Noah said, "Are you f—ing kidding me? Did this guy, a man running for president, just ask Russia to hack America?” Yes, he did:

Donald Trump called on a foreign nation to commit a crime to hurt his political opponent. This is what happened people, in real life. It’s not a matter of interpretation.

That's problematic, since Trump has suggested that we change our foreign policy to help Russia. Why protect Germany? Why protect Japan? That's what Trump has suggested, as he has tried to walk back our NATO commitment. Noah said that maybe Americans are just asleep at the wheel: "Donald Trump is almost like global warming right now. People are trying to deny that it’s real. They think it’s something we can worry about later, but it is happening right now."

For those who are that far out of it, Noah has some advice:

To all the people out there considering voting for Trump, I hope you enjoy your vote. Because on days like this, you realize, this could be the very last vote you will ever get.