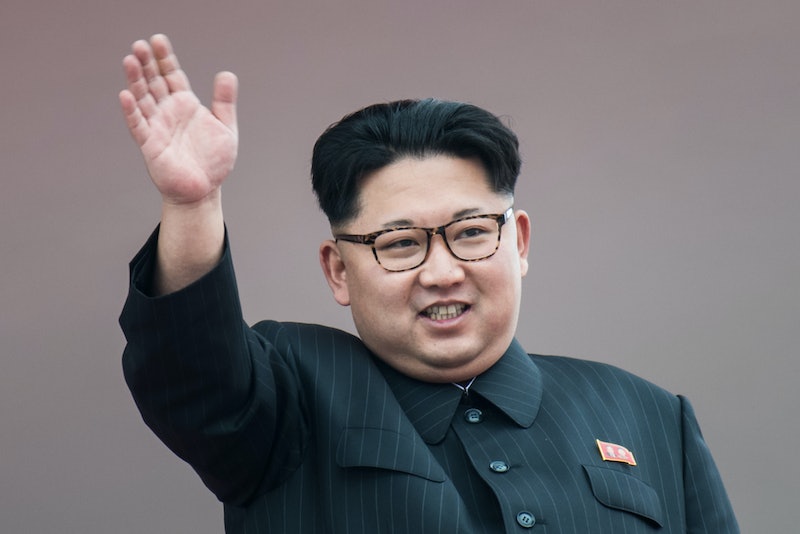 Republican presidential nominee Donald Trump is curiously known for cozying up to dictators, and now it looks like those dictators may be returning the favor. While Democratic nominee Hillary Clinton recently received an endorsement from President Obama at this week's Democratic National Convention, the GOP presidential hopeful has gotten praise of a different kind. Back in May, Trump was endorsed by North Korea, home to that champion of freedom Kim Jong-Un. Should this come as a surprise to voters? Given Trump's repeated praise of the likes of Vladimir Putin and Benito Mussolini, probably not.

Praise for the Republican nominee appeared in a May 31 column for DPRK Today, a publication which frequently serves as a government mouthpiece for propaganda. Though the endorsement did not come directly from Kim himself, the praise likely reflects the oppressive regime's sentiments toward the candidate, experts told NK News. The editorial was written by Chinese North Korean scholar Han Yong-mook, and claimed that the media has been portraying Trump unfairly throughout the election.

"It turns out that Trump is not the rough-talking, screwy, ignorant candidate they say he is, but is actually a wise politician and a prescient presidential candidate," the editorial read, according to Reuters. Trump's promises to hash out issues with North Korea through "negotiations and not war" would subsequently free America from "living every minute and second on pins and needles in fear of a nuclear strike," it continued.

The column also described Democratic nominee Clinton as "thick-headed Hillary" — a line that feels like it could have been plucked from one of The Donald's ever-eloquent tweets.

The DPRK Today endorsement follows a trend of Trump's willingness to work with and praise dictators. In terms of North Korea, Trump has said as president that he would not only want to meet with Kim Jong-Un, but would also hope to remove U.S. forces from South Korea, despite it still being at war with the North. The publication said of these idea: "There are many positive aspects to Trump's 'inflammatory policies.'"

Evidently, that pattern has already had far-reaching consequences. On Wednesday, the Clinton campaign accused Trump of enticing Russian leader Putin, who has been repeatedly accused of inching closer and closer to the title of "dictator," to hack into the Democratic National Committee's email server. At a news conference that same day, Trump encouraged Russia to dig into the DNC's servers, telling the crowd: "Russia, if you're listening, I hope you're able to find the 30,000 emails that are missing. I think you will probably be rewarded mightily by our press."

The previous week, Clinton's camp had accused Russia of breaking into the DNC email server to help Trump. The DNC email hack resulted in thousands of emails being leaked to the press, some of which showed top DNC officials evidently trying to undermine Democratic candidate Bernie Sanders' campaign. The leak caused DNC Chair Debbie Wasserman Schultz to step down.

So this last week of email hacks come with a clear warning: Should Trump become president, the American public could likely expect more interference by the world's dictators. Cool.