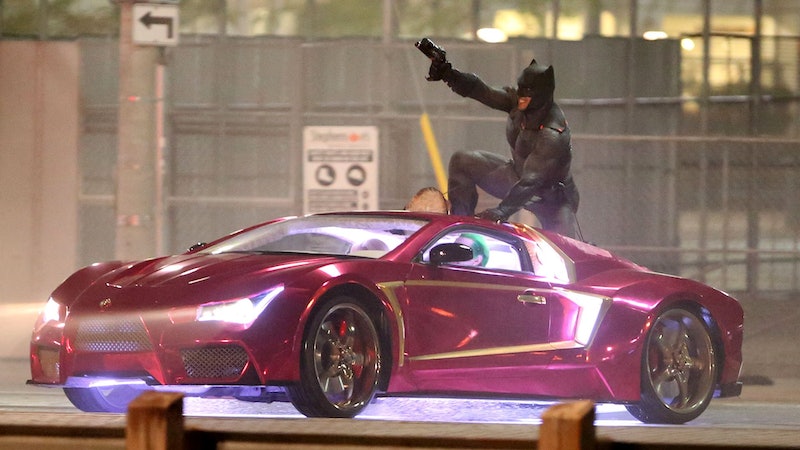 The new movie Suicide Squad features all your favorite DC supervillains in one place, kicking ass and taking names later. It's the first time that these villains are portrayed as using their powers for good (although it's in exchange for being pardoned for their crimes), so it's a very different perspective from typical superhero films. That being said, fans are eager to know if any of DC's "traditional" heroes will be making an appearance — specifically, if Ben Affleck's Batman is in Suicide Squad . After all, no superhero movie feels complete without a cameo from the Caped Crusader.

Thankfully for fans, the answer is an unequivocal "yes": Batman will be gracing the Suicide Squad screen with his presence. His appearance in Suicide Squad was first rumored in 2015, when Affleck (who, of course, played the hero in Batman v. Superman: Dawn of Justice) was first spotted on the Suicide Squad set in Toronto. The rumors were then confirmed when pictures of the Batmobile were leaked from the set while a chase scene was being filmed. Since then, the Dark Knight has made brief but notable appearances in the film's promotional materials, leading to a lot of speculation about what his role will be in the movie. Here's what we know so far.

He Gets Some Screen Time With Harley Quinn

Between a bunch of quick cuts in the trailer, there are snippets of a sequence where Batman dives into the water and is then seen carrying a soaked, unconscious Harley Quinn in his arms. However, another cut of the trailer features a clear scene of Batman in a high-speed pursuit behind The Joker and Harley Quinn, so it's hard to tell what the nature of the Dark Knight's relationship to Margot Robbie's character will be.

He May Have A Fight Scene With Deadshot

In an interview with Fandango, Will Smith hinted at a potential fight scene between his character and Affleck's, saying, "The Bat does cross my path... and, ya know, it's not completely pleasant."

He Has A Dark Side

Director David Ayer revealed to Collider that, because the film is told from the perspective of the supervillains, Batman is shown in a different light. He said, "All the Batman movies have been from Batman’s point of view. He’s the good guy. He’s the hero of his own movie in all the movies we’ve seen. If you look at what Bruce Wayne has done in creating the Batman persona, his idea was to terrorize criminals. It’s sort of psychological warfare against criminals. This wrath that comes in the night and attacks and pulls criminals from society. For the first time, we’re seeing Batman from the point of view of the criminals and he’s freaking scary.”

It makes sense that Batman would appear in Suicide Squad given that, as Ayer himself noted to Collider, "so many of the characters that are in that squad had some interaction with him [in the past]." And, based on what has been released so far, it looks like Batman's role will be more than a one-scene cameo. Bat-fans, rejoice.