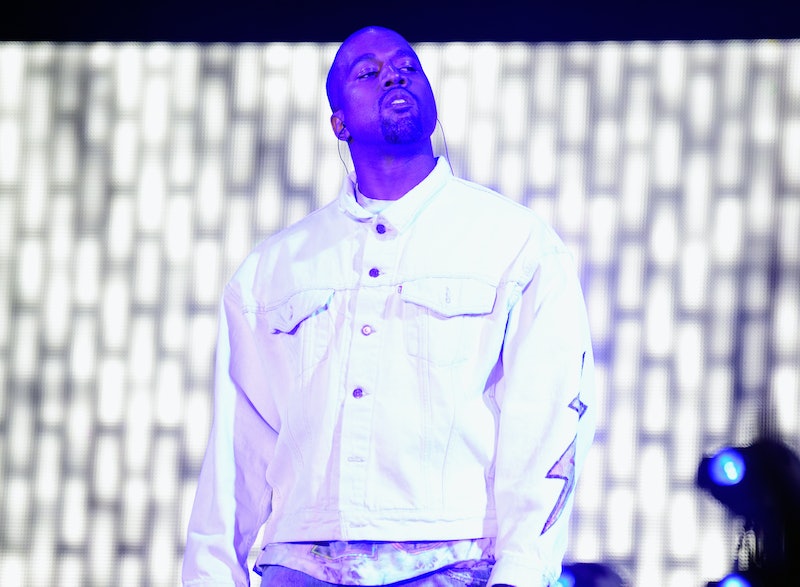 If I were to tell you that there's a rumor that Kanye West is planning to call out Taylor Swift at the VMAs, I don't think you'd be totally shocked, would you? Bustle has reached out to West for comment, but have yet to receive a response. There are plenty of artists who I don't think would start drama to that level, or at least not that publicly. But, in addition to thriving off of that kind of drama, West has always had what seems like a different relationship with award shows than his fellow performers.

For example, let's recall why the drama between Swift and West started in the first place. The rapper was the kind of person who felt comfortable coming onstage during someone else's speech to share his opinion on who should have actually won. That, right there, is not an instinct that seems to be overly common in the people sitting in those seats hoping they win an award.

Part of me wonders if that feeling about award shows goes all the way back to 2004, when West walked out of the American Music Awards, saying he'd been "robbed" because he didn't win. Three years later, at the 2007 MTV Video Music Awards, that sense of entitlement had only deepened; as you may recall, that was the year that West went on his "two years in a row" tirade, swearing he'd never come back to MTV, because, for the second year in a row, he'd been denied what he felt he'd earned: a VMA. But, of course, we know he didn't follow through on that promise, because there he was at the 2009 VMAs, famously (pun intended) interrupting Swift's speech.

So yeah, with seven more years of simmering under his belt, I'd say we're at a point now where there's no behavior of West's that I'd rule out at an award show. So it surprises me not at all to read this rumor from Hollywood Life that he's allegedly planning something epic to embarrass Swift from the stage:

Kanye is looking to do ‘Famous’ live on stage at the VMAs and would love to really rip into Taylor Swift during the performance... And if Calvin wants to join the stage with him, count Kanye being very interested into that as well.

This just seems so plausible to me, if only for the fact that just Kanye West and Calvin Harris appearing onstage together would send such a message. West wouldn't even need to do anything; it would all be there in sharp contrast for the media to delight over. Who knows what, if anything at all, Kanye West will do to further his beef with Taylor Swift on the 2016 VMAs stage. I mean, he could just move on entirely, because he never really asked to be a part of this narrative either. Well, sort of. But his history at these award shows is enough to get me to sit up and listen to the rumors, and it certainly would make for an interesting show at the VMAs.