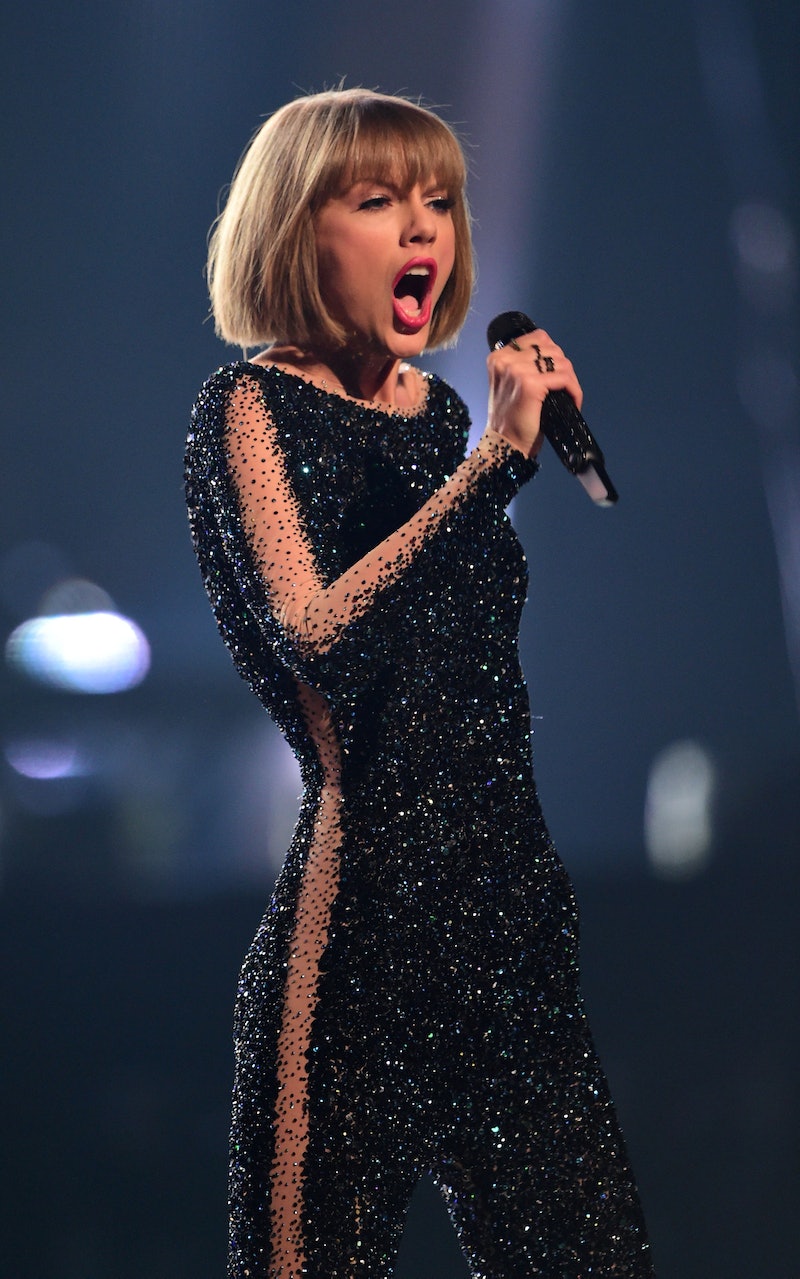 The highlight of Monday night, for me, was when Taylor Swift responded to Kanye West's "Famous" diss at the 2016 Grammys after she won Album of the Year. It was the perfect response and the perfect time to deliver the comeback. If you need a refresher on Kanye's misogynistic "Famous" lyrics, here's what he said: "I feel like me and Taylor might still have sex / I made that b*tch famous." To many, this seemed like an allusion to Kanye stealing the mic from Swift at the 2009 VMAs (yeah, FOREVER ago). The line itself is pretty sexist and also totally inaccurate when you consider that Swift was already famous... as evidenced by the fact that she was winning an award when Kanye supposedly "made [her] famous." Thankfully, Swift's Grammys response to Kanye's lyrics on Monday SHUT IT DOWN.

As the first woman to win Album of the Year at the Grammys twice, I want to say to all the young women out there, there are going to be people along the way who will try to undercut your success or take credit for your accomplishments or your fame, but, if you just focus on the work and you don't let those people sidetrack you, someday when you get where you're going you'll look around and you will know that it was you and the people who love you who put you there. And that will be the greatest feeling in the world. Thank you for this moment.

Swift hadn't responded to the lyrics when they originally came out, but her rep did release a statement on the matter after Kanye took to Twitter claiming Swift had made up the lyric herself and approved of it.

Kanye did not call for approval. But to ask Taylor to release his single "Famous" on her Twitter account. She declined and cautioned him about releasing a song with such a strong misogynistic message. Taylor was never made aware of the actual lyric, "I made that b*tch famous."

It makes sense that her reps released a comment after Kanye started claiming Swift actually approved of the sexist lyric, but it's so much better that Swift waited until the Grammys to fire back on her own. Her words were inspirational, and she got to say them after winning a freaking Grammy award. Sorry not sorry, Kanye, but Swift is famous all on her own. And, if anyone is getting famous from anyone else, maybe it's the guy who has to keep talking about 2009 to even stay relevant.