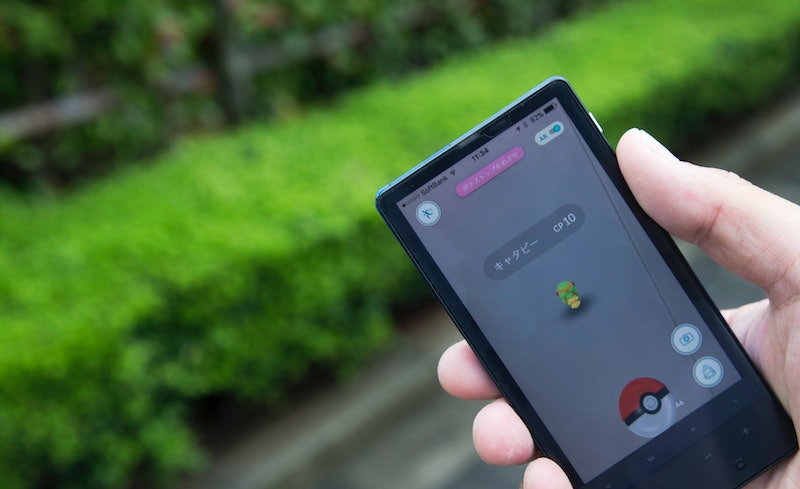 "Pokemon Go" is the gift that just keeps on giving. Interested in the wearable tech merch ("Pokemon Go" Plus) to enhance your gaming experience? It's in your future — but, you might have to wait a little longer than you thought: The release of “Pokemon Go" Plus has been delayed. The initial release date for "Pokemon Go" Plus was originally set for the end of July, but Nintendo of America revealed on Twitter on Wednesday that the new date is likely to be September. A reason for the delay has not yet been given, but Bustle has reached out to Niantic, Inc., which makes "Pokemon Go," and will update if we hear back.

Although we don't know exactly why the wearable has been delayed, what we do know is that when "Pokemon Go" Plus hits retailers, the device is likely to be in high demand. As many of you are already aware, one of the major drawbacks of playing "Pokemon Go" is that you have to walk around with your head buried in your smartphone all day (hello, tech neck), but "Pokemon Go" Plus seeks to change that. The watch-sized device allows you to play the game whilst conveniently staying tuned in to your immediate surroundings (hurrah!).

If you're within range of some Pokemon, the wearable will notify you of their location with a simple flash of light. All you then have to do is press the button on your wrist to throw a Pokeball to catch the Pokemon (although note that it only works if you've caught the same type of Pokemon before). Similarly, if you're within range of a Pokestop and you see some gear you want to pick up from it, just press the button on your "Pokemon Go" Plus and the item will add be added to your inventory. Simple.

According to it listing on GameStop, "Pokemon Go" Plus will cost $34.99; the release date currently posted is Sept. 30, but it's worth remembering that it might always change again. Many have already pre-ordered the device; indeed, reports state that some people have already begun re-selling their pre-sold "Pokemon Go" Plus devices on sites like eBay, often for astronomical prices. Whether or not it's really worth it is up to each individual, so if you're unable to pre-order it through official channels, you'll have to decide whether the additional cost from a re-seller is something you're OK with.

In any event, though, you'll probably want to keep checking back for more info if you really, really want a "Pokemon Go" Plus. It's possible we might not see it until well into fall, at which point the allure of the game may have faded... or will it? At San Diego Comic-Con, Niantic CEO John Hanke teased a number of features that might be added to updates to "Pokemon Go," noting that the company had big plans to keep developing the game. So who knows? With more coming in the future, "Pokemon Go" and "Pokemon Go" Plus could both have long and happy lives. Because who doesn't want to catch 'em all?