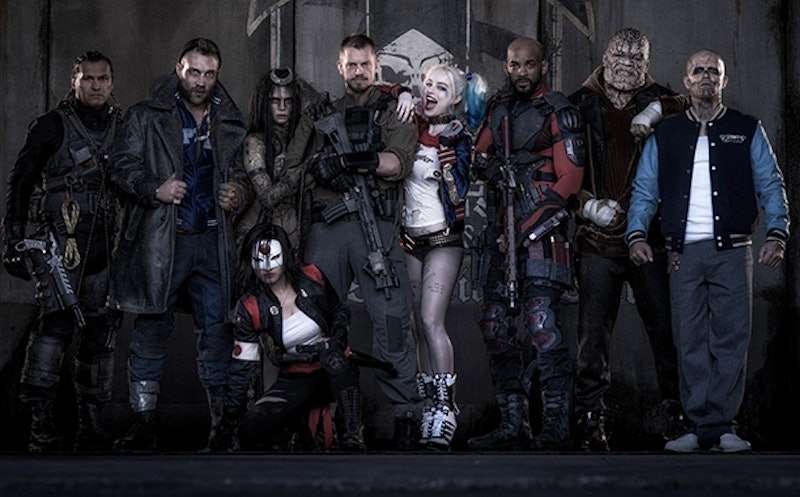 Between the complicated worlds of Marvel and DC, it's easy to mix up movie timelines and figure out exactly who goes where. There have been a million reboots of Spider Man and a long list of Batman franchises, with some plotlines choosing to strictly adhere to canon while others deciding to totally disregard the comics. Though the upcoming Suicide Squad flick is based on a DC comics series of the same name and pulls most of the characters straight from its pages, the new film universe created by DC is rapidly expanding and includes a whole lot of prequel/sequel action that doesn't quite line up with the original stories. In this case, Suicide Squad is a sequel to Batman v Superman: Dawn Of Justice, basically, in that the two stories link up through subtle, shared threads.

Zack Snyder, the film director behind BvS, keeps a top-secret timeline board in his Warner Bros. office, according to Entertainment Weekly. "Another trick of assembling these films is to make sure casual moviegoers are kept oriented about the timeline," wrote EW when it visited Snyder in the space. "So on that secret board in Snyder’s office, it’s clear: Suicide Squad takes place after the events in BvS ." While David Ayer directed Suicide Squad, he is very much operating on this timeline from Snyder.

One way in which the movies connect? The Joker. The original trailers for Batman v Superman showed evidence of the Joker and sparked theories about the villain's involvement in Dawn Of Justice. Ultimately, Jared Leto never showed up in that film, but the new supercut of the movie shows an additional scene where Lex Luthor is hauled off to Arkham. If I were a betting woman, this is where I'd place $10 on the Joker meeting up with Luthor there. My logic? Since the Joker doesn't appear in BvS, we can assume that he is already locked away. A possible meeting between Luthor and the Joker puts the two movies in order, while confirmation that Batman is in Suicide Squad puts the movies within the same multiverse. But, hey, that's just my theory.

Personally, I am excited to see how the stories weave together and how the characters change over time. Tangled plot lines often result in richer characters, so here's hoping the upcoming DC movies are the dawn of movies that do the comics justice.