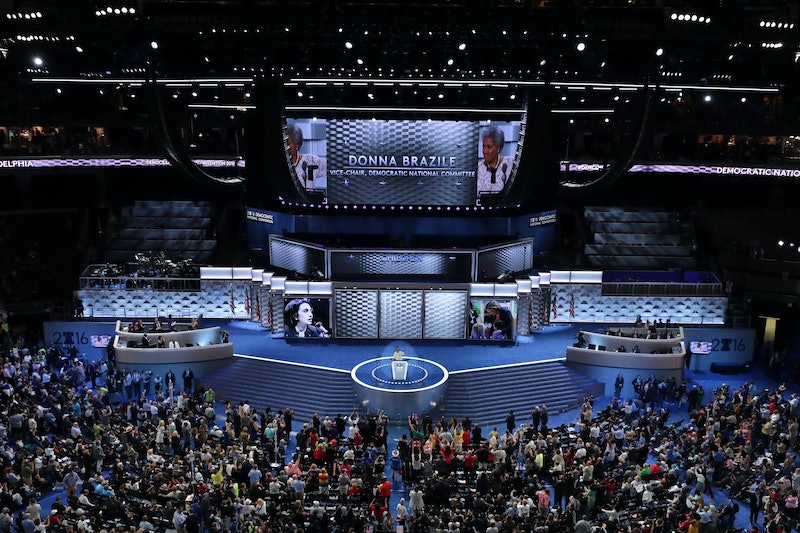 After three days of watching the DNC convention in Philadelphia, my opinions on policy may not be much changed, but one thing is for sure — I’m sold on the propaganda. I’ve been belting my heart out to “Fight Song,” yay-ing and booing along with delegates, and tearing up alongside my BFF Joe Biden. Call me brainwashed, but I’m betting no matter how much resentment you may have against the DNC (maybe you were personally victimized by Debbie Wasserman Schultz’s emails?), there were some moments at the DNC convention that were just too powerful to hate.

While Republicans’ strategy for dealing with possibly the most negative campaign cycle in recent history was putting on a Hillary Clinton roast instead of a convention, it seems the Democrats have taken a different approach at their convention. While there have been a fair amount of warnings over the last few days of the danger Donald Trump poses to the American people (ie. those “Donald Decoded” videos), it seems like their main tactic has been to endear Democratic party members to viewers so hard that voters would be more likely to invite them to speak at their wedding than vote against them.

Here are some of the most intense moments of the DNC convention so far that had me bleeding blue, whether I wanted to or not.

For Michelle, Biden and Barack in particular. These intro videos, awash with images of frolicking children and pensive window gazing extolled the virtues and accomplishments of headliners Michelle Obama, Tim Kaine, Bill Clinton, Joe Biden and President Obama before they took the podium. I found myself asking "Where have you been all my life?" as I learned about Tim Kaine's civil rights advocacy, watched the smallest of children profess their love for Michelle Obama, and fought back nostalgic tears for Joe Biden's Veep-dom. President Obama's was one of the most tear-jerking, and it probably had you saying, "that temperament tho..."

Celebrity Rendition of "What The World Needs Now Is Love"

What the world needs right now is obviously this song. If you don't cry watching this chorus of broadway legends pour their souls into this classic love anthem on stage at the convention, you might want to talk to your doctor about a possible tear duct insufficiency. The original celebrity rendition of this song, "Broadway for Orlando" was released right after the tragic shooting in June, and this Wednesday night it played perfectly into the Dem's theme, "Love Trumps Hate."

Breaking the Glass... Wall of Pictures

As long as I can expect to make 79 cents to a man's dollar, I'm honestly okay with a little pandering to my ovaries. The roll call on Tuesday that resulted in Hillary Clinton's official nomination by the Democratic party was a big deal for women — undeniably — and Hill's crew didn't miss the opportunity for showmanship. The slideshow of pictures of all 44 male presidents of the United States was a pretty necessary reminder of the sexist-lunacy in this country, and though the shattering of the wall of presidential portraits may have been the obvious move, I can see myself telling my grandchildren about it. Probably.

Watch this speech. Just, watch it. This 11-year-old American-born daughter of undocumented immigrants, Karla Ortiz told her own story in a way that will make you feel, period, with a precocious level of conviction, honesty and passion. In the process, she proved that an 11-year-old can be a better speaker than the Republican nominee (and have a more nuanced understanding of immigration issues in America).

Just Joe Biden. He's stood up to the NRA. He's waged war on cancer. With his sexual assault reform advocacy, he is the original #HeForShe. In order to get out a powerful warning about Trump in his speech, he even told the audience to hold back applause or cheers. What politician doesn't even want applause?I have been right all along to suspect he truly runs on children's laughter and the hope of a better future alone. I wouldn't be surprised if on Wednesday night, even some Republicans were buying what St. Biden was selling.