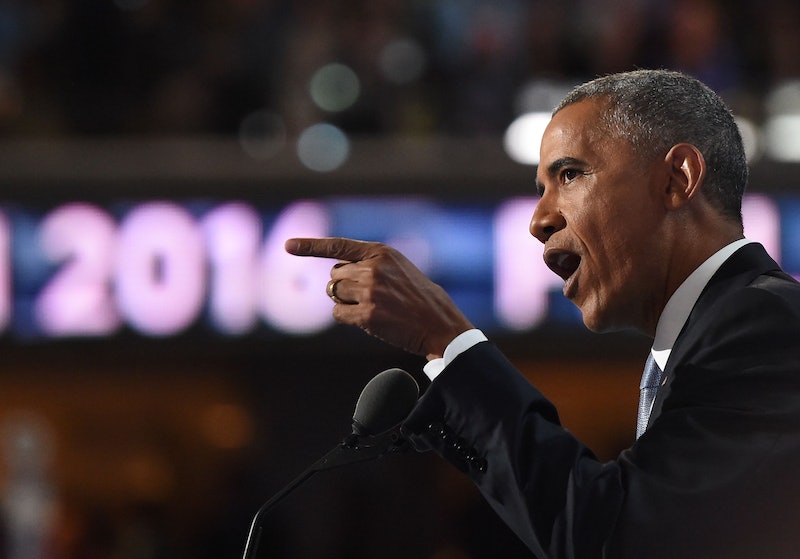 2016 is shaping up to be a historic election in big and small ways. Hillary Clinton shattered the glass ceiling, Bernie Sanders flexed some serious micro-fundraising muscle, and GOP nominee Donald Trump has, well, confounded everybody. But it’s hard to remember an election in recent memory where the gloves have come off so hard — or have been flung so far — by a sitting president. In his keynote speech Wednesday night at the Democratic National Convention in Philadelphia, Barack Obama insinuated that Trump is a “homegrown demagogue.”

But these values my grandparents taught me — they haven’t gone anywhere. They’re as strong as ever; still cherished by people of every party, every race, every faith… That’s why anyone who threatens our values, whether fascists or communists or jihadists or homegrown demagogues, will always fail in the end.

While the charge against Trump’s style of politics is hardly new, the fact that even the President is getting in on it underscores two important things: the first is that Obama’s “faith in the American people” that they wouldn’t elect Trump is being tested. Although most of the current polling only reflects the effects of the Republican Convention, held last week in Cleveland, many have seen Clinton’s early lead erased, and some polling averages even show Trump with an advantage.

The second noteworthy observation of Obama’s frankness has to do with the fact that Trump is no longer merely a hot dumpster fire — it’s the closest the White House has come to destruction since a Christmas Eve Fire in 1929 that sent Herbert Hoover into the Oval Office to save vital paperwork.

Obama’s willingness to wade into the muck with the candidates may be unusual for a sitting president, but that has a lot to do with the fact that it’s been a long time since a sitting, outgoing president has been popular enough to campaign for his party’s successor. In 2008, George W. Bush’s popularity was toxic, and in 2000, Al Gore was trying to distance himself from the popular-but-scandal-ridden Bill Clinton.

But Obama’s legacy is, in many ways, contingent on Clinton’s success: while some of the biggest achievements of 44’s presidency are unlikely to change — the Supreme Court majority that granted marriage equality will remain intact unless one of the liberal justices steps down — the Affordable Care Act would undoubtedly face more repeal attempts, ones that the Senate might be unable to stop.

Perhaps the biggest question raised by Obama’s choice to call out Trump so acutely is one of audience: with most Trump and Clinton supporters unlikely to switch sides, who was Obama addressing with his charges?

My best guess is that he’s talking to the farthest-flung members of the Obama coalition, trying to convince them to reconvene. It’s almost like an X-Men sequel, a heartfelt invocation from Professor X, trying to talk Wolverine into coming back to fight alongside the team: only this time, they’re not fighting Magneto or Sabretooth: they’re taking on Apocalypse.