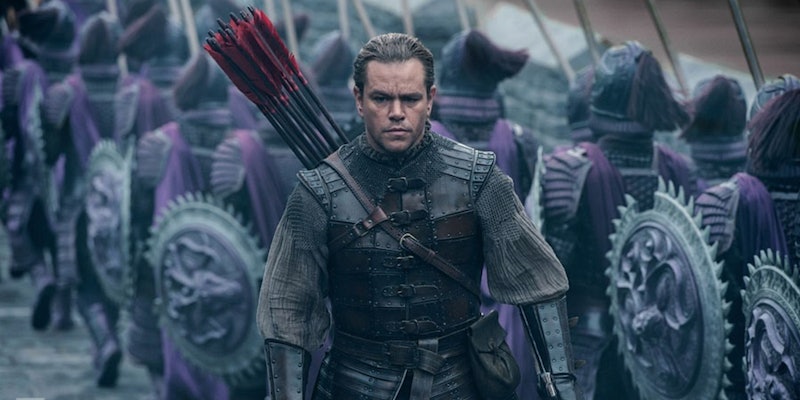 The fact is, recent efforts — like Marvel's Black Panther starring Chadwick Boseman and directed by Ryan Coogler — notwithstanding, minorities are still terribly underrepresented in Hollywood. Which is why you might be encouraged to hear that Hollywood is helping to produce a film helmed by a prolific Chinese director and featuring a cast of primarily Chinese actors, about the building of the Great Wall of China. That is, until you watch the first official footage and see that the The Great Wall trailer has Matt Damon and his very Caucasian face plastered front and center. Say what?

To be fair, as you watch the trailer it gradually becomes clear that this isn't some painstakingly accurate historical epic. "One of mankind's greatest wonders," the text reads. "500 years to build. 5500 miles long. What were they trying to keep out?" A soldier is then promptly devoured by some sort of creature and the rest of the promo turns into a fantastical monster-mash. Maybe the idea that a white man somehow made his way to Imperial China isn't the most unbelievable aspect of a film that features people aiming flame-throwing catapults at huge scaly beasts from the top of the Great Wall of China.

Putting a white man at the forefront is a groan-worthy way to get a film with a largely minority cast made — think Dances With Wolves or The Last Samurai or even Avatar. And it's not surprising that this tactic is used here because, despite the fact that The Great Wall was helmed by a Chinese director and made in China (in fact, it's the largest movie ever filmed entirely in that country, with a budget of $135 million), the project actually originated stateside from the minds of white writers like Tony Gilroy (The Bourne Identity), Max Brooks (World War Z), and Edward Zwick (the aforementioned Last Samurai).

The Great Wall is an international production, which means it was produced by Legendary Pictures in addition to several Chinese production companies, and will be distributed in the United States by Universal Pictures. The film probably wouldn't have gotten made — at least, not on this scale — without the involvement of these American companies, and they probably wouldn't have made it without a bankable American star as the lead.

But there's a lot to admire about The Great Wall despite the presence of its inexplicably white leading man. It's the English-language debut of filmmaker Zhang Yimou who has wowed audiences with his visual storytelling in action movies like Hero and House Of Flying Daggers — not to mention his direction of the opening and closing ceremonies at the 2008 Beijing Olympics — and he undoubtedly deserves the wider attention a film of this scale will bring him. And Zhang himself seems pleased with the experience, telling Entertainment Weekly that the combination of Hollywood blockbuster with traditional Chinese elements has been "synergistic."

"There’s a saying in Chinese: 借水行船 Use the water to move the boat," the director told EW. "In this case, we are using Hollywood filmmaking to introduce Chinese culture." Given the fact that "the story is really told from an American’s perspective," Zhang made it his job to ensure that "everything Chinese in this film feels genuine." That includes "the use of color, the design of weapons, the battle formations and strategy, the battle drums, as well as the design of the palace." It also includes working with a lot of authentic Chinese actors.

Apart from Damon, fellow American Willem Dafoe, and Chilean-born Pedro Pascal (aka Game Of Thrones' Oberyn Martell), the entire cast is filled with actors who may be newcomers to American eyes, but will be exceedingly familiar to audiences in China — including boy band heartthrob Luhan, actress Jing Tian (who will also be seen stateside in 2017's Kong: Skull Island ), and popular Hong Kong movie star Andy Lau. In fact, it's this last name that makes Damon's involvement in this film interesting, since Lau originated the role in Infernal Affairs that Damon would later go on to reprise in its American remake, The Departed.

In addition to the Chinese director, actors, and countless crew members that The Great Wall employed, we can also be thankful for the fact that at least Matt Damon isn't actually playing an Asian character à la Emma Stone in Aloha. The Great Wall will smash its way into theaters on Feb. 17, 2017.

Update: On Aug. 4, director Zhang Yimou released a statement regarding the controversy surrounding The Great Wall:

In many ways The Great Wall is the opposite of what is being suggested. For the first time, a film deeply rooted in Chinese culture, with one of the largest Chinese casts ever assembled, is being made at tent pole scale for a world audience. I believe that is a trend that should be embraced by our industry. Our film is not about the construction of the Great Wall. Matt Damon is not playing a role that was originally conceived for a Chinese actor. The arrival of his character in our story is an important plot point. There are five major heroes in our story and he is one of them — the other four are all Chinese. The collective struggle and sacrifice of these heroes are the emotional heart of our film. As the director of over 20 Chinese language films and the Beijing Olympics, I have not and will not cast a film in a way that was untrue to my artistic vision. I hope when everyone sees the film and is armed with the facts they will agree.