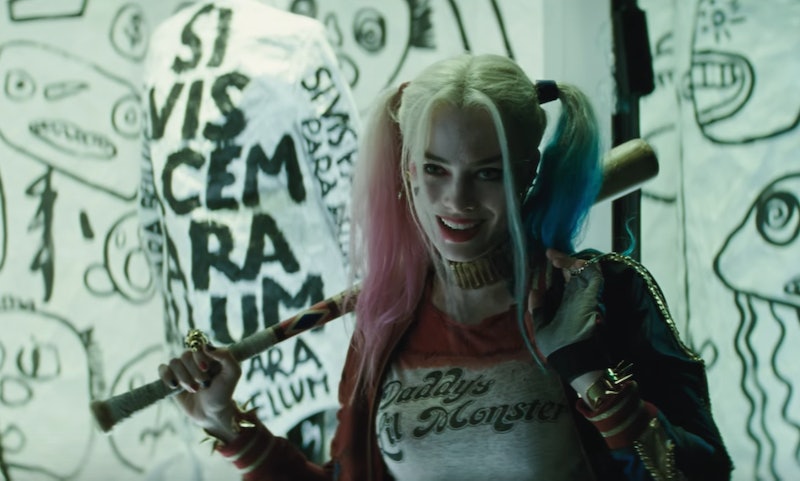 Suicide Squad might be a giant ensemble movie with stars like Will Smith, Viola Davis, and Jared Leto, but let's be real: it's all about Margot Robbie's Harley Quinn. Easily the most anticipated character in DC's next franchise, Suicide Squad 's Harley Quinn is the talk of the town and was one of the very first supervillain characters to inspire buzz about a solo movie. A Harley Quinn solo movie is appealing for many reasons, one big one being that it would add another female-driven property to the DC Cinematic Universe, but is a Harley Quinn spinoff movie going to happen after Suicide Squad? It's a definite possibility.

Rumors that Harley might get her own movie began circulating a few months before the release of Suicide Squad, but the discussion has yet to become official. So far, no Harley Quinn solo movie, spinoff, or continuation has been confirmed by Warner Brothers or DC. And Robbie herself has been vague on the possibility. When asked about a rumored spinoff movie at a fan screening in Canada, Robbie said, via ComicBookMovie.com, "We're not sure." Robbie added, however, that she would love to play Harley again, saying, "I'm just so not done playing that character and there's so much more to do with her — and as anyone who's read the comics knows, there's a million different storylines to explore."

There's no question that DC and Warner Bros. would jump at the opportunity to make a Harley Quinn movie, what with Robbie's increasing star power and the positive press surrounding Suicide Squad. It's also likely that Robbie signed a multiple-movie contract, with clauses for hypothetical sequel as well as appearances in future Justice League films, I'm sure. Assuming everything goes well with Suicide Squad and a Harley Quinn solo movie does happen, what would it be about?

When The Hollywood Reporter first reported on the development of a Harley Quinn movie in May of 2016, they alleged that the movie wouldn't just be a Harley Quinn story, but would introduce a whole group of female heroes and villains, like Batgirl and Birds of Prey. Who those heroes and villains will be has not been confirmed, but in her comic book life, Harley Quinn has crossed paths with quite a few daring female characters, like Poison Ivy, who helped her after she left The Joker.

Not only would a Harley Quinn movie put more women villains and heroes into the spotlight, THR also reported that DC and Warner Brothers had hired a female writer to begin working on the script, suggesting a very clear and obvious push to attract more female viewers and fans.

Depending on Harley Quinn's fate in Suicide Squad, the spinoff could take place before or after the events of the film, and none of the other parts have been cast yet. It's possible that, depending on the response to Suicide Squad, the Harley Quinn movie could be called off, or, at least, moved towards a different direction. Perhaps we'll see more of her abusive love affair with the Joker, or her pre-villain life. Her movie could, of course, also be incorporated into Suicide Squad 2.

Other members of the Suicide Squad, most notably Will Smith's Deadshot, have also been rumored to be eyeing solo movies. Only time will tell if they actually happen.