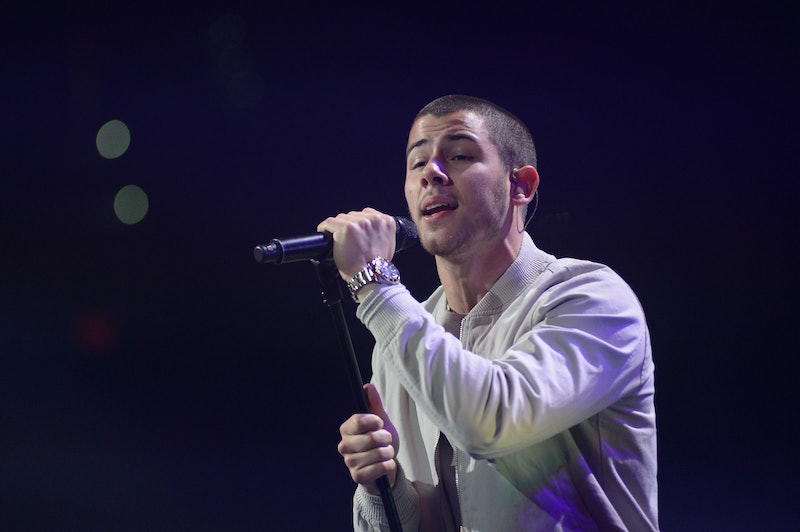 There are certain childhood films that are near and dear to my heart, which means that I am very cautious about allowing myself to get invested in their inevitable reboots. One film I would appreciate protected from bad remakes is Jumanji, the whimsical, weird story of a terrifying board game that comes to life and wreaks havoc on a town. The original film starred Robin Williams as a boy-turned-man who got trapped inside the game for years, and it was one of the late actor's goofiest roles ever. While we won't be able to recapture the magic that was the original movie, of course, there is some hope for the remake — at least, if we're going by the casting choices. According to Deadline, a new person is in talks to join the cast, and should they take the offer, it could make the Jumanji remake step up its game. That's right: Nick Jonas is in talks to star in Jumanji , and my inner child is so very happy right now.

As reported Thursday, the former Jonas Brother and Camp Rock star is discussing the prospect of joining the new adventure flick from Sony Pictures, which will be a "reimagining" of the original board game film. He would be in good company: Dwayne Johnson and Kevin Hart are already onboard, which seems to suggest that the new movie will be just as much a comedy as it is an adventure. Though Deadline states that the decision to join the film will likely be weighed against Jonas' current acting and music schedule, my fingers are crossed that Jonas decides to make the move. After all, a big movie from childhood and a big star from it? That's pretty much an ideal match.

Not to mention a great move for Jonas. The triple threat is moving full-force into both acting and music opportunities. In addition to releasing hit singles like "Chains" and going on tour with BFF Demi Lovato, Jonas scored a diabolical role on Scream Queens in 2015, and will appear in the buzzed-about fraternity movie Goat which will hit theaters later this year. A family-friendly action comedy is the perfect way for him to round out his Hollywood experience, and is a path not unlike the one my other childhood crush, Zac Efron, took. It's totally the right move for him.

If a Jumanji remake is truly happening, I'm all for Jonas being in the game.