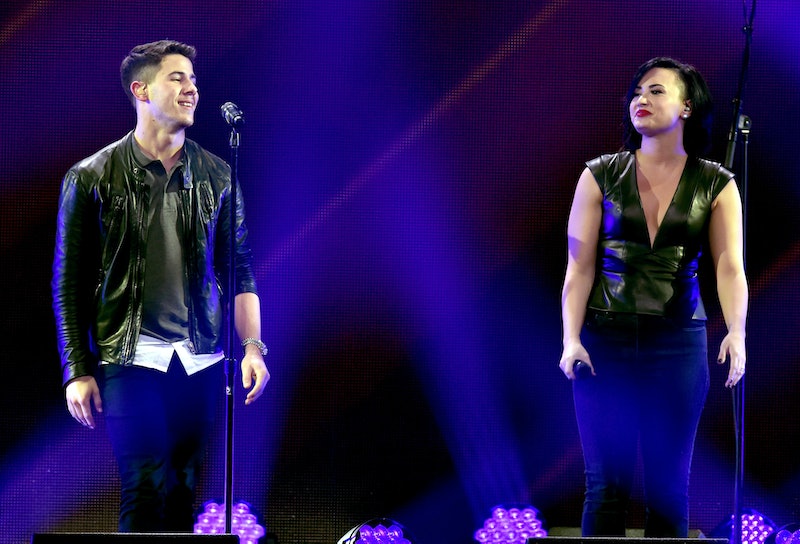 When I woke up Monday morning, I wasn't sure I was going to make it through the week without passing out in a heap at my computer, but then I found out that Demi Lovato and Nick Jonas are going on tour together. Now I'm confident I'll be bright and perky — at least until Wednesday. At which point, hopefully, two of my other favorite artists will announce a collaboration that can carry me through to the weekend. The tour will be called The Future Now Tour , visiting over 40 cities in the United States and Canada, and will kick off in June 2016, although tickets go on sale starting Nov. 7.

But, as excited as I am about the announcement, which was revealed Oct. 26 on Good Morning America, eight months is a long time to sit on the edge of your seat, holding your breath until you can see these two in concert. I think the current record for not breathing is 22 minutes, so anything over a day or so probably isn't great for your health. Since I'm not willing to sit around twiddling my fingers until Lovato and Jonas make it to my city, I decided to take a look at their past appearances together to see what predictions I could make about this tour.

I actually came up with some pretty good guesses, so take a look at what I think we'll be seeing come June 2016.

These two have known each other since 2008, when they co-starred on Disney's Camp Rock, so it would be a total missed opportunity not to throw in a song or two from back in the day.

2. Special Guests From Their Record Label

Lovato and Jonas co-own the record label Safehouse Records, which they founded to give artists a safe space to really be themselves and write from their hearts, so I'd imagine we might see some of their up-and-coming acts get featured along the way.

3. A Bunch Of Costume Changes

Jonas has already planted the seed of how many different looks they're going to have on the tour, joking, "I'm going to have two more costume changes than Demi." Big talk, Jonas! Now let's see you follow through.

4. Pared Down Versions Of "Avalanche"

The two shared the duet "Avalanche" on Jonas' self-titled album, and I'm imagining it resurfacing on the tour as a simple, pared-down, intimate love song performed without any fancy backing. A little bit unplugged, if you will.

5. Rumors That They're Hooking Up

I'd like to believe that these two could get through a whole tour without the whispers that they're something going on between them, but, sadly, it hardly ever works out that way. I predict at least three or four magazine covers claiming they're hooking up on the sly.

Jonas released "Levels" in August of this year, but the last music we had from him before that was in November 2014. I'm more than ready to start hearing some new tracks from this guy alongside favorites like "Chains" and "Jealous."

7. Some Classics From Demi Lovato

If we don't hear "Heart Attack," I might have one.

Even though Lovato dated Nick Jonas' brother Joe, and Nick dated Lovato's former best friend Selena Gomez, I'm almost positive we aren't going to have any awkward run-ins, because these two are consummate professionals with respect for each other. Even with all the potential, I'm predicting a low-drama atmosphere.

You better believe I'm gonna be there. WITH BELLS ON.

And, absent a crystal ball, those are all the predictions I can make so far. What I do know is that this will be fun, friendly, and a cant-miss performance for fans of either Demi Lovato or Nick Jonas. And since I happen to be fans of both, I pretty much couldn't be happier right now.