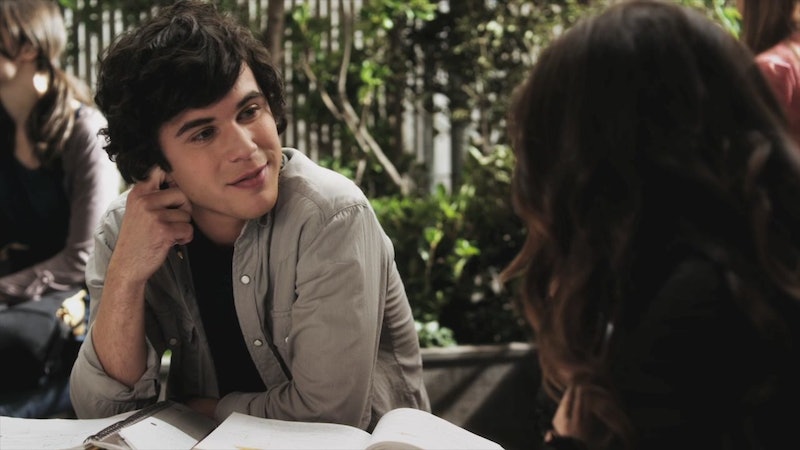 There are certain characters that breeze in and out of Rosewood with very little explanation. One of these elusive characters was Holden, Aria's friend and "Ezra beard," AKA the dude who acted as her pseudo-boyfriend when Aria was attempting to keep her relationship with her high school teacher on the down low. According to The Hollywood Reporter, Shane Coffey is returning to Pretty Little Liars as Holden in Season 7B, which opens up a whole bunch of questions about the little-seen character. What could his return mean for the show?

Holden's time on Pretty Little Liars ended in Season 3, and, given that we're currently in Season 7 of the mystery drama, I never thought that Holden was a face that would pop up in Rosewood again. Though Holden wasn't a huge character when he was on Pretty Little Liars, he did have significance outside of Aria. For one thing, Holden was shown to be somewhat involved with Noel, another character who is back in Rosewood for Season 7.

In Season 3 it's revealed that Holden used to party at Noel's cabin, a place where notorious Liar adversary Jenna also spent her time. In fact, the reason they learned this was because Holden had the very same party stamp that Emily's girlfriend Maya was spotted with right before she died. Holden was definitely getting into shady territory in Season 3, but we never really got to explore that as the character went MIA. Could he be involved with the greater mystery now that he's back?

It's possible, though, that there is one other big explanation for why Holden might be returning to PLL — and this one might make Ezria shippers very, very happy. We saw in episode "Along Comes Mary" that Ezra finally proposed to Aria, but have yet to see whether Aria will accept his proposal. However, showrunner I. Marlene King did hint that there would be a PLL wedding in Season 7B, which is when Holden is supposed to return to the series. If Aria does accept Ezra's proposal, she could be the one getting hitched in Season 7B — and Holden could return to Rosewood as her guest.

We'll have to wait until Season 7B for the truth about what Holden is up to, but stay hopeful, Ezria fans — Holden's return could be great news.