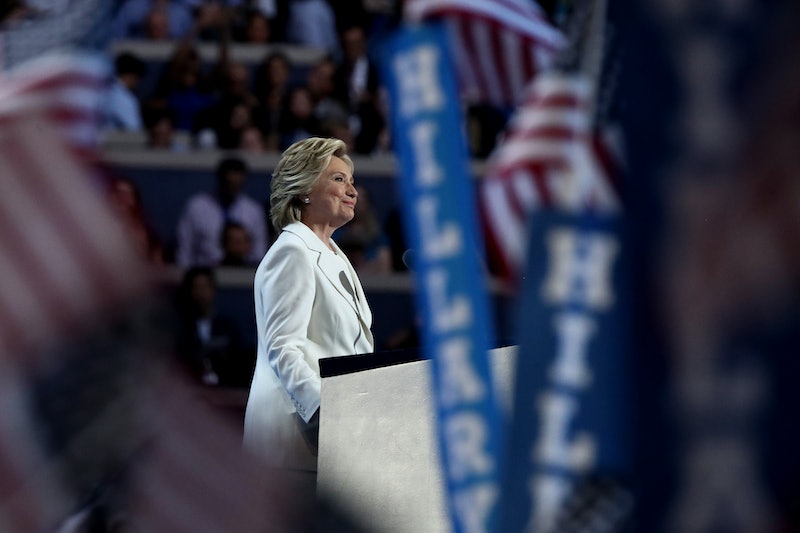 As Hillary Clinton gave her nomination acceptance speech at the Democratic National Convention, the internet, of course, was already engaging their meme-making skills to celebrate (or make fun of) the momentous occasion. Hillary Clinton DNC speech memes and jokes are a hilarious way to officially end the primaries, and below are some of the best ones that are sure to leave you laughing in your seat.

Clinton's speech was many things, responses varied across party lines and candidate preferences as you'd expect. It was inspiring, infuriating, weird, funny, vague, self-congratulatory, historic, and as many other superlatives as you can think of given the breadth of opinions about Clinton and her time in office. One thing was abundantly clear from the start, however: that this was going to be one of the biggest speeches in Twitter meme history, at least since Chris Christie basically encouraged the Republican National Convention crowd to burn the witch (the "witch" being Clinton, of course), and will likely remain that way until Nov. 8, when Twitter users will probably break the internet in their anxiety and excitement. I honestly can't wait.

Whether you're #WithHer, still feel the Bern or, like me, have an icebox where your heart used to be and don't care about any of the candidates, these tweets show the hilarity and absurdity that comes with any live-tweeted event.

If Hillary is Daenerys...

Does that make Bill Drogon?

"Odd" Was One Word For Donald Trump's Acceptance Speech

The Science Quote Heard Round The World

She blinded us all, with science.

And Then There Was Bernie

And to think we could have had that resting Bernie face in the Oval Office.

But Ultimately, She Did Really Well

It was truly a night to remember.