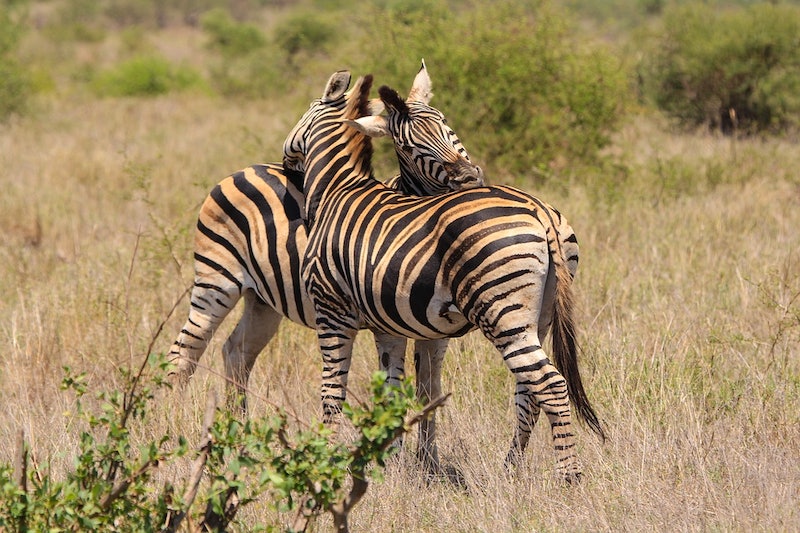 Don't let nobody say that humans aren't some of the weirdest animals on the planet, particularly when it comes to mating and romance. But frankly, the competition is pretty intense. For every peculiar hand-written poem or slightly unwise lewd lingerie purchase, there's a creature in the animal kingdom who's intent on pushing the envelope with feats of strength or intensity, aggressive acts, or inexplicable bodily functions, all as part of their rush to mate. And I'm not even going to cover some of the more bizarre genitalia designs out there (barbed cat penises, anybody?).

The frenzy of all species to successfully pass on their genes before dying has led to the evolution of some admirably bonkers approaches, from interior design to calcium arrows and detachable arms. All they really want to do is get laid; but competition is often fierce (and frequently deadly), requiring the necessary development of more and more impressive mating tactics. Tinder may be a brutal landscape, but at least nobody's expecting you to withstand the threat of potentially being eaten, or to take part in genitalia-fencing. (Or perhaps they are. I don't know your life.) Even though humans have developed other purposes for life beyond reproduction — art, spiritual fulfillment, Pokemon Go — it can be educational to look at the natural world where it remains the driving force, if only to help us look at our own lives with more perspective. If a male isn't willing to create an entire color-coded house and lawn for you, what's the point, really?

Here are seven of the most bizarre animal mating rituals, from the fun to the terrifying. At the very least, these will make you glad you're not a water strider.

If there's anything that should remind you about the female-centric power dynamics of mating in many species, it's the courting rituals of the bower bird. Male bower birds are intensely precise and adventurous interior decorators, creating "bowers" to impress potential mates. And we're not talking a few sticks put haphazardly in a circle; scientists have captured footage of males "painting" their elaborately-formed bowers with berries, arranging objects in subtle degrees of color on a "lawn" around the bower itself, and basically being admirably perfectionist about the process. The ability to put together the most impressive bower is the talent that determines female choices, which means they're also not beneath utterly destroying the carefully constructed architectural marvels of rivals. Male bowerbirds are renowned for finding (or stealing) any object that fits into their color schemes, from bottle caps to human garbage.

Mobula rays, a particular species of manta ray, have their own way of standing out from the pack, and it turns out that it's actually a both-gendered affair. They're also called "devil fish" or "eagle rays" for their propensity, in the mating season, to gather in big groups in deep ocean and propel themselves to huge heights out of the water, landing with a massive belly-flopping smack. The theory goes that the louder the smack, the more attention a ray gathers, thus raising their potential for getting a mate. Females join in too, often flipping and somersaulting instead of going for the pure resounding flop. There's no data as to whether this is actually a painful process, as we don't know very much about mobula rays in general, but it certainly looks extremely entertaining.

Flatworms (which look a bit like sea slugs) have evolved a mating ritual that derives from the fact that they're hermaphroditic: they can both carry eggs and deliver sperm. So how does a pair determine who'll be carrying the babies? They fence with their penises. Obviously.

The battles can last up to an hour, but the point isn't just symbolic; the bodies of flatworms can become pregnant if the penis "swords" manage to inject anywhere on the skin, so the father is the one who makes a "hit" first. It's not as simple as that, though; some species will hold onto the sperm from several different "matches" before they actually allow their bodies to fertilize eggs. Even if you win the fencing match, you may not have won the war of fertilization.

This is just adorable: scientists were baffled for long periods about the appearance of highly regular, ornate patterns that appeared in the sand of the sea floor in certain locations. They were far too complex to be created by currents; but what was actually causing them? The answer came in 2013: tiny male puffer fish were creating the sand "cities" or "crop circles" in a laborious attempt to attract mates. Astonishingly, the fish are only a few inches long, but their formations can be over 7 feet in diameter, and take many hours to create with their fins. We've now filmed the actual process in which puffer fish create these circles, and it's intense and long-lasting, but it's all worth it if the female arrives and approves; she'll lay her eggs in the very centre for the male to fertilize. And you thought somebody making you a bracelet was romantic.

From the sublime to the threatening: water striders are renowned for their ability to "walk" on water by utilizing surface tension, but when it comes to their mating procedures, things rapidly become a bit suspenseful. Mating occurs on the water surface, with the male on top; but the upsetting bit comes from the fact that male water striders will basically act like the Mafia until the females agree to mate. They'll "tap" their legs on the surface of the water in a manner that's likely to attract curious predatory fish, and only stop once the female gives in and allows them to mate. She's also the one most at risk, because she's the partner actually on the water surface. Charming.

The process of snail and slug mating is often a long and very sticky process, but a variety of snail species have their own ways of making things a bit spicier. They produce "darts," produced either out of calcium or chitin, and stick them into the flesh of their mating partners.

For a long time this process and its function have remained a mystery (National Geographic theorizes that the ritual, observed by the ancient Greeks, may have been the origin of Cupid's love arrows in myth), with ideas about its purpose ranging from some kind of sexy "gift" to a kind of helpful copulatory aid. We now know that the particular composition of love darts serves two purposes: they help sperm survive longer inside a snail's body, and they also discourage snails who've been hit from mating again for a while. Essentially, the dart-firing snail ensures that it's pretty likely they'll be the father of that particular batch of baby snails.

A particular kind of mollusc with the noble name of the "Argonaut" (it's also called the paper nautilus) has a decidedly bizarre (in fact, almost mythic) way of getting sperm into the ladies. The males, which are tiny compared to the females, actually store their sperm in a spare "arm," known as the hectocotylus, and when they get intimate with the particular object of their desire, it detaches. The hectocotylus lodges itself inside the mating cavity of the female, and the male swims away, probably to die. The female, however, can have several of these "arms" inside her cavity at the same time, and presumably chooses between them for the sperm she really wants. Yes, you are allowed to make a joke about mating costing "an arm and a leg".