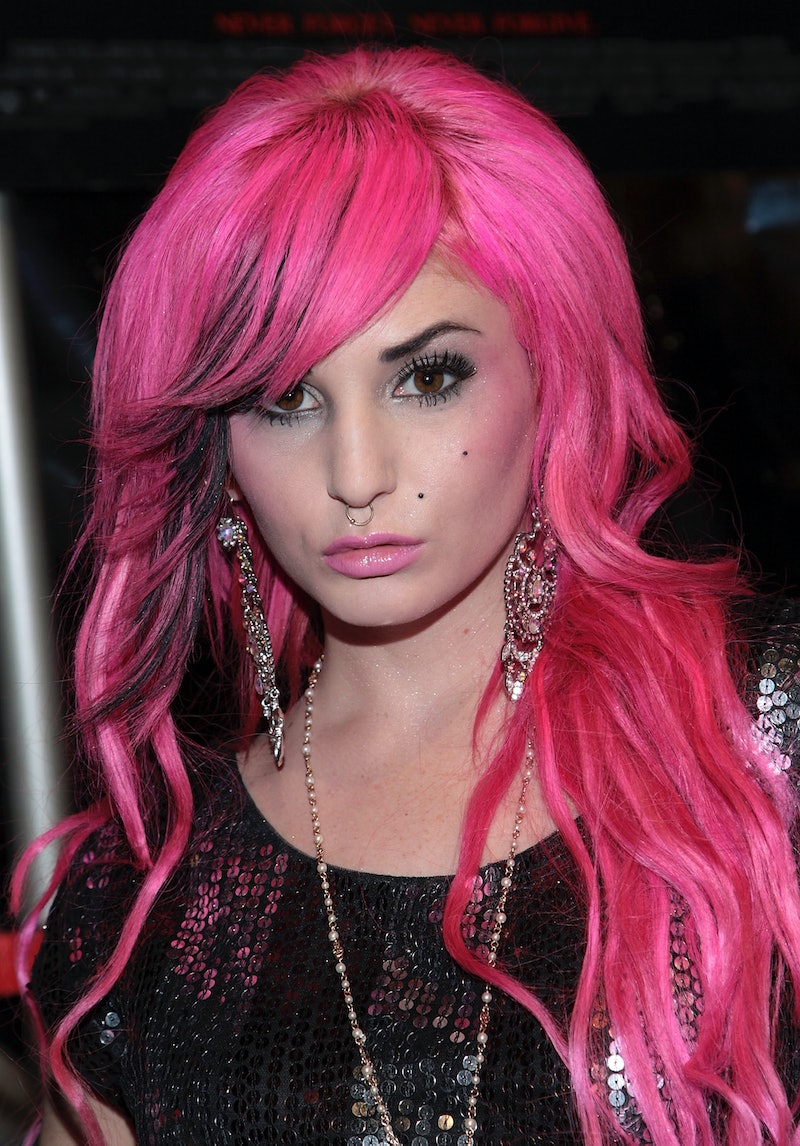 With their sky-high hair, undying adoration for all thinks cutesy, and an intense case of self-obsession, scene queen celebrities were pretty much unmissable both online and off in the early to mid '00s. Not only were their outfits completely outrageous, but these ladies had a soft spot for drama and could make us squirm with their counterfeit high-pitched giggles.

Although these neon barbies were often confused with their emo counterparts by unknowing outsiders, they actually couldn't have been any more different. True, both subcultures were alternative and had some major influences on each other. But as a rule, the emo kids were a lot more brooding and wore way more black, whereas scenesters were excitable little rainbows who weren't even necessarily into the same music, let alone wardrobe choices. They also repped a lot of cartoon imagery.

If it weren't for finding an old hoodie with pink leopard-print cat ears sewn onto it while having a recent clear-out of my wardrobe, I wouldn't even remember my fleeting scene phase. But if you, too, dabbled in scene trends back in the glorious days of MySpace, then chances are you stole some style elements from these totally rad queens at some point because, like, duh.

If you didn't know who Audrey Kitching was during your peak MySpace days, then I'm going to have to assume you had less than 1,000 friends and were never allowed onto the bulletin trains. She was essentially the queen of all queens.

Kitching began modeling when she was 14 and even had a brief moment in which she dated Brendon Urie from Panic! At The Disco. It was around the time when she dyed her hair that unforgettable shade of pink, actually. You can still find her on Instagram, where she uploads her more recent modeling shots.

Where do I even start? Hanna Beth initially began her journey through internet fame as Audrey Kitching's partner in crime. Since then, she's started her own blog and made it on her own. On Hanna Beth's wrist, there is a rather striking tattoo of a pink cupcake with a kawaii face that makes me feel so relieved that I never got illegally-inked at the time like so many of my friends stupidly did.

Zui Suicide was another one of Audrey Kitching's model sidekicks. Back in the day, the duo used to team up together for photoshoots under the moniker Trashy Life . They'd upload videos teasing their lighthearted shenanigans and pretty much every scene tween couldn't decide whether they wanted to kill them or be them. From the outside, all we we could see were our style icons playing with inflatable kiddy pool toys and asking strangers stupid questions. Their lives seemed perfect.

The blonde-haired, blue-eyed, raccoon-tailed scene princess seemed to have it all through our rose-tinted computer screens. Unfortunately, this was not the case. In 2011, Rolling Stone published a story describing the hardships of the internet starlet involving underage sexual assault and daily death threats that caused her family to relocate. Though it's a sad read, it's an important reminder that not everything is as it seems on social media.

The cross-dressing, pink-haired makeup mogul and singer you see today once ruled as the MySpace scene king. At his peak, Jeffree Star managed to amass over 50 thousand comments on each new photo upload and was potentially one of the most talked-about internet celebrities of the time.

Current pinup superstar Raquel Reed started on a route to greatness back in her scene days when she was good friends with the one and only Jeffree Star. As well as working behind the MAC counter, Reed had some strong links to the underground club kid scene in New York and would often be seen out with the likes of Amanda Lepore. Like most MySpace queens, she changed her hair color on a whim, but is most remembered for her dazzling teal locks.

Even if you weren't into following the lives of strangers on the internet as an alternative teen, you may recognize Jac Vanek from her graphic tees and other typography-based designs. In the beginning, she started selling her own bracelets at Warped Tour, where she was previously a band photographer, and used the proceeds to go on to bigger and better things. Vanek was one of the core scene queens and used to casually hang out with Audrey Kitching as they were both dating Panic! At The Disco musicians at the same time.

Fans of Lexi Lush often found themselves drawn to her eclectic fashion, elaborate self-styled photoshoots, and her growing amount of cutesy merchandise. She was a massive fan of the Care Bears, Barbie, Hello Kitty, and My Little Pony and her cotton-candy bedroom was completely full of anything to do with these children's entertainment brands.

Although Kat Von D is a celebrity in her own right thanks to the success of her TV show LA Ink, she was still a source of style inspiration for many alternative teenagers. Her bountiful tattoos, immaculate makeup, and hair extensions — not to mention the fact that she was legitimately famous under her own venture, unlike the "posers" — made her an icon in the eyes of many. Though Von D wasn't without her own drama, Jackass star and ex boyfriend Steve-O once used MySpace to call her out for some allegedly appalling behavior.

Like many scene girls on MySpace, Hilary Haywire was known for her thick black eyeliner poking through behind a layered mullet. She was rumored to be friends with Kiki Kannibal for a short time before she was accused of copying her every move. Haywire spent some of her free time amateur modeling, but her Model Mayhem account suggests that she's more of a hairstylist these days.

If the lyrics "let's get fucked up, give me some alcohol" mean anything to you, then I'm guessing you already have an inkling as to who The Millionaires are. Scene sisters Melissa Marie and Allison Maria Green formed the group accidentally after messing around on Garage Band. Their signature style consisted of big hair, black eyes, and skimpy outfits.

So yeah, like, totally add me on MySpace. I'll trade you my hair secrets for a picture comment.